Black is not the most admirable color. That’s especially if you’re a cat who was born among cultures that view black cats in a bad light.

But despite their age-old reputation for being bearers of bad luck, black cats are just as adorable as their white, orange, and brown counterparts. Therefore, they deserve an equally endearing name.

A creative name for your black kitto can help draw attention to the animal even when he would traditionally be ignored. It also helps give the cat a unique identity, especially in homes with multiple pets.

If you’ve recently adopted a black cat and are looking for a befitting name, you’ve come to the right place. Browse the following collection for 90 fancy black cat names. 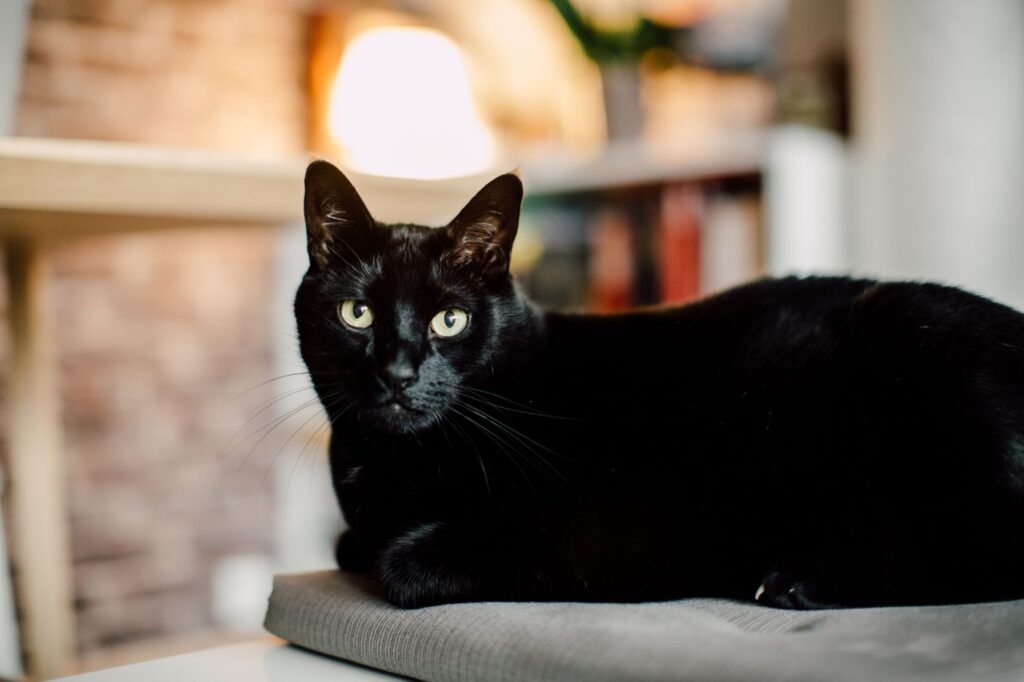 1. Ace – A cool name for a skilful cat.
2. Batman – How would you like to name your cat after the dark-clothed superhero?
3. Bones – Appropriate for a skinny cat.
4. Bullet – Perfect for a fast cat.
5. Caesar – A good choice for a domineering cat.
6. Captain – Also great for a domineering male cat.
7. Chase – Another perfect choice for a fast cat.
8. Cinder – Perfect for a black or dark-colored feisty male cat.
9. Elvis – Consider adopting this name for your black cat if you’re inspired by Elvis Presley’s famously black hair.
10. Gulliver – Great for a perpetually-hungry cat.
11. Hunter – The name is pretty much self-explanatory.
12. Iron – For a tough or resilient cat.
13. Java – For a sophisticated cat.
14. Macho – Ideal for a huge cat.
15. Menace – Ideal for a troublesome cat.
16. Ninja – Opt for this one if your cat is incredibly acrobatic.
17. Pal – A simple yet cool name.
18. Ruffles – For a male cat with lots of fur.
19. Shadow – Another perfect choice for a black or dark-colored male cat.
20. Tuxedo – For black male cats with tints of white on their fur. 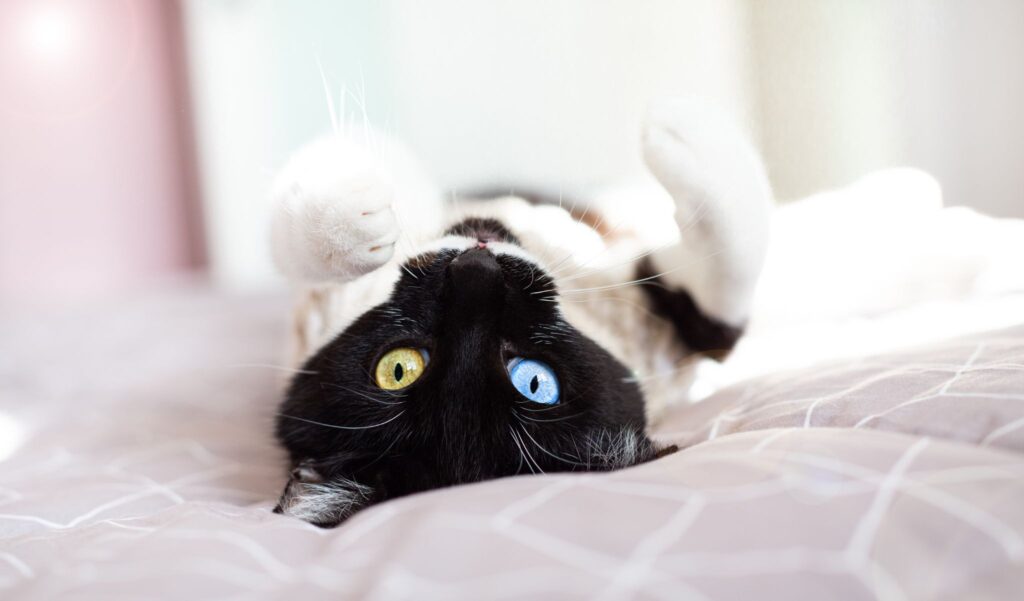 21. Aggie – Derived from ‘Agatha.’
22. Autumn – Based on the season that falls between summer and winter.
23. Batgirl – Feminine version of batman.
24. Beatrice – For a cat that brings you joy.
25. Bella – Means ‘good’ in French.
26. Bonita – Means ‘pretty’ in Spanish.
27. Bubbles – Appropriate for a rambunctious cat.
28. Buena – Means ‘good’ in Spanish.
29. Charisma – Means ‘appeal’ or ‘charm.’
30. Chelsea – A very popular name for black female cats.
31. Dahlia – Inspired by the dark flower of the same name.
32. Daisy – Inspired by the daisy flower.
33. Diamond – Based on the precious stone of the same name.
34. Dixie – Great for a female cat that you truly cherish.
35. Dolly – For a female cat that’s just as beautiful as a doll.
36. Elle – Means ‘beautiful.’
37. Esmeralda – Derived from ‘emerald.’
38. Ivy – Perfect for cats that love to climb, just as the ivy plant.
39. Jade – Excellent for black female cats with green eyes.
40. Jasmine – Great for a cat that smells just as fresh as jasmine plants.
41. Joey – Feminine version of Joe.
42. Latoya – A cute female name for an equally adorable cat.
43. Meredith – Means ‘sea guardian.’
44. Olive – For a female cat that’s as chic as olives.
45. Opal – Another perfect name for a cat you consider to be truly precious.
46. Rose – Opt for this one if your female cat reminds you of black roses.
47. Safira – Appropriate for cats with eyes colored like a sapphire.
48. Sofia – Another cute name for lovely female cats.
49. Valeria – Means ‘strong and vigorous.’
50. Velvet – Good for a beautiful cat with tender skin.

Related:  Is Rosemary Safe For Cats? Can Cats Have Rosemary? UPDATED 2022

Black Cat Names That Resonate With the Word ‘Black’ 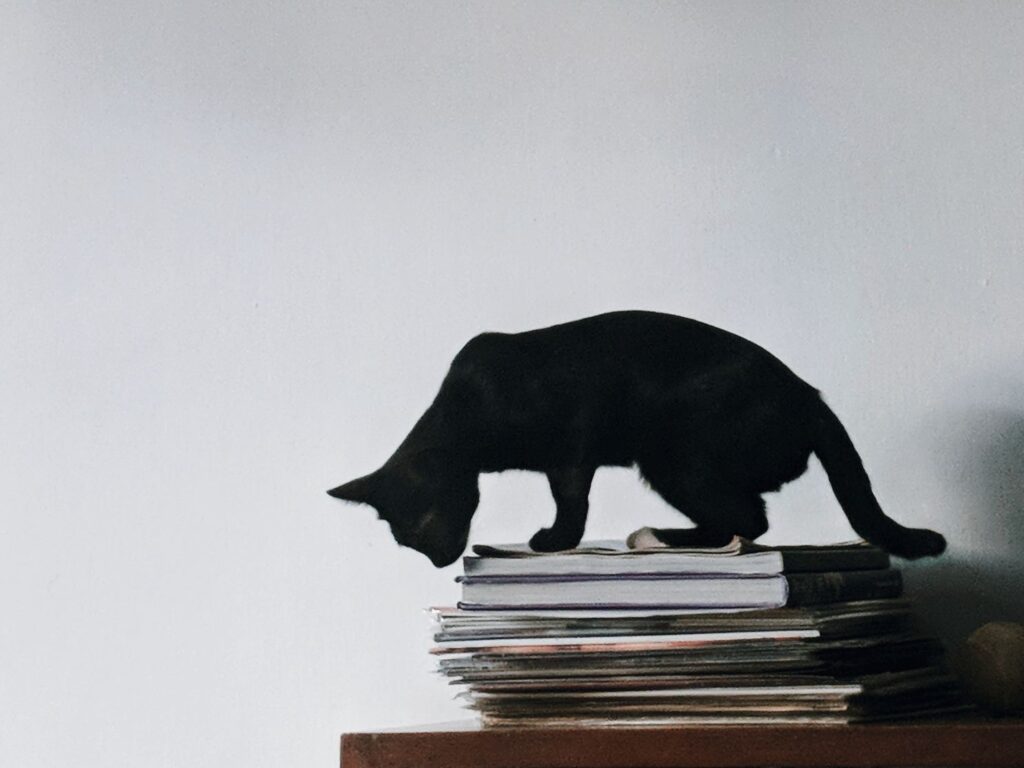 66. Charmed – Simply means bewitched.
67. Dracula – Inspired by a traditionally dark and mysterious creature.
68. Luna – Related to the moon.
69. Magic – Cats are magical creatures; which makes this name suitable for any black cat.
70. Misty – For a cat that’s just as elusive as mist.
71. Morticia – If your cat reminds you of creepy places like the funeral home.
72. Mystique – A creative way of associating your cat with mysticism.
73. Phantom – An excellent description for a sneaky cat.
74. Raven – Another notoriously dark creature that makes for a great cat name.
75. Venom – Appropriate if you believe your cat is highly dangerous (in a good way though).

Related:  How To Clean My Cats' Ears

Black cats may be frowned upon by some cultures. But that doesn’t necessarily mean they portend bad luck.

If you’re blessed with a black feline, consider giving him or her a creative name from the collection above.