Many pet parents are kind enough to share human delicacies with their feline friends. And most cats are just as happy to gorge themselves on people snacks.

However, certain foods considered safe for human consumption have proven disastrous for pets. A case in mention is spices like garlic and onions, which are known to cause a type of hemolytic anemia in cats known as Heinz-body anemia. Therefore, it behooves every cat owner to analyze the safety of every people foods before sharing these treats with their feline housemates.

Bearing that in mind, can cats eat ice cream? This question shall be the focus of this post.

Cats should not eat ice cream.

Ice cream may be safe for human consumption. But this yummy warm weather snack can harm your cat in many ways.

Lactose intolerance is arguably the biggest concern with ice cream for cats. That’s due to the presence of milk and/or other dairy products.

Sugar and fat are other core ice cream ingredients that make the snack unhealthy for cats. And as you’re about to find out, there are many other reasons to avoid sharing ice cream with your feline friend.

What Are The Primary Ingredients In Ice Cream?

To fully understand the harmful effects ice cream can have on your cat, you’d need to back up a bit and familiarize yourself with the core ingredients in this popular snack.

Now, there are numerous products sold as ice cream worldwide. These products may differ slightly in their overall composition, depending on the specific region they’re manufactured and consumed. However, nearly all ice cream varieties have milk as the primary ingredient.

Related:  Can Cats See in the Dark?

Cow’s milk is the most common milk type used. However, goat’s milk, sheep’s milk, and even camel’s milk may serve as handy alternatives. Some ice cream varieties might include other dairy products in addition to milk, such as cheese, butter, and yoghurt. There are also ice creams based on dairy milk substitutes. Examples of these substitutes include soy milk, coconut milk, sunflower milk, almond milk, cashew milk, and tofu.

Sugar is another top ice cream ingredient. The substance is typically added for sweetening purposes. It can range from natural to refined sugar. Some manufacturers may also replace natural sugar with, or include the compound alongside, artificial flavor-enhancers like cocoa, vanilla, strawberries, etc.

Fat is the third most common ice cream ingredient. The fat used in ice creams can take various forms, ranging from butter to ordinary margarine.

Besides milk, sugar, and fat, most ice creams also contain the following ingredients;

• Spices for enhanced flavoring
• Frozen custard
• Eggs
• Dietary emulsifiers, such as polysorbate 80 (P80) and carboxymethylcellulose (CMC)
• Water, which serves as a base of all the other components

Which Ice Cream Ingredients Are Most Harmful To Cats? 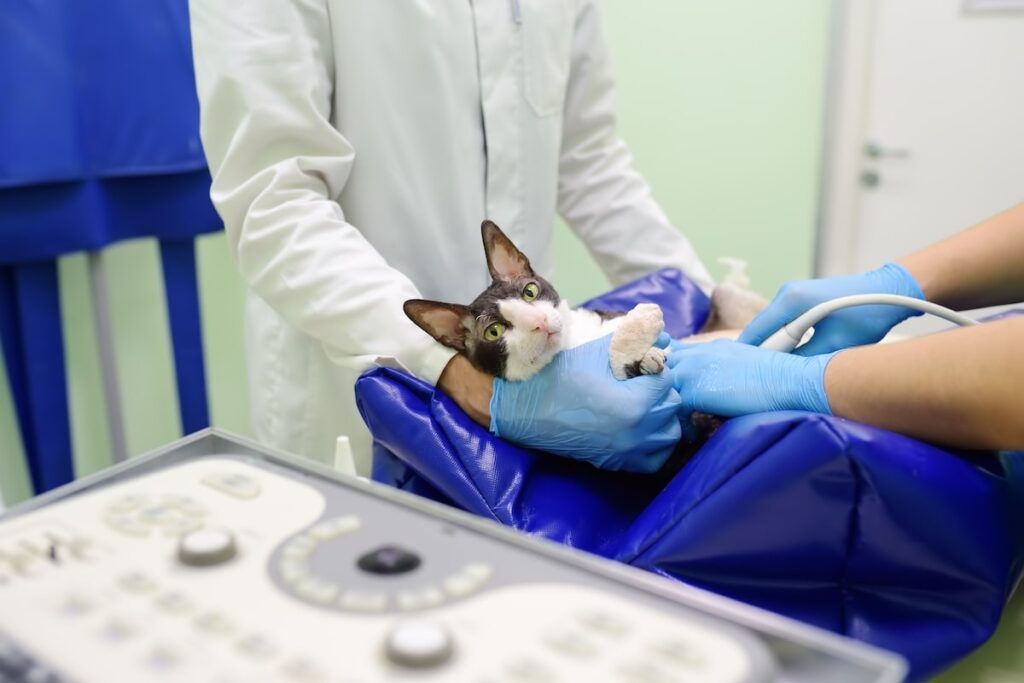 Contrary to popular misconception, adult cats do not require dairy milk in their diets. Milk is associated with lactose intolerance, a medical condition that can cause vomiting, diarrhea, stomach upset, and abdominal discomfort.

Lactose intolerance results from the fact that the body of mature cats cannot secrete lactase. Lactase is the hormone that digests lactose, the main sugar in dairy products.

Interestingly, kittens are born with the ability to make lactase. But that ability starts to diminish as soon as the cat is weaned.

It’s also important to note that lactose intolerance in cats is not only a milk issue. It can also result from other dairy products, including cheese, butter, and yoghurt.

Lactose is not the only compound in dairy goods that cats shouldn’t eat. These products also contain whey and casein, two proteins known to cause allergic reactions in humans and felines alike.

The symptoms of whey and casein allergy are generally similar to those of lactose intolerance.

Cats require a substantial amount of healthy fats in their diet. But excess fat consumption can turn out to be more harmful than useful to them.

Besides, fat can worsen the symptoms of diseases like pancreatitis and inflammatory bowel disease (IBD).

Unlike humans, cats are unable to taste sweetness. That’s already a valid reason to avoid feeding your cat foods laden in sugar, such as ice cream. High sugar intake is also associated with type 2 diabetes, a lifestyle disease responsible for thousands of feline fatalities worldwide.

The negative health effects of sugar for cats apply to both natural sugar and common sugar alternatives like chocolate. In fact, chocolate-flavored ice creams could be double harmful to your cat. That’s due to the chemicals theobromine and caffeine, both of which have proven toxic to cats.

Symptoms of chocolate poisoning in cats include vomiting, diarrhea, elevated heart rate, hypertension, and seizures. Without prompt medical attention, your can may slip into a coma and even die.

Related:  Why Do Cats Like Catnip and How Safe Is the Plant?

Other sweeteners considered toxic to cats include xylitol and vanilla. 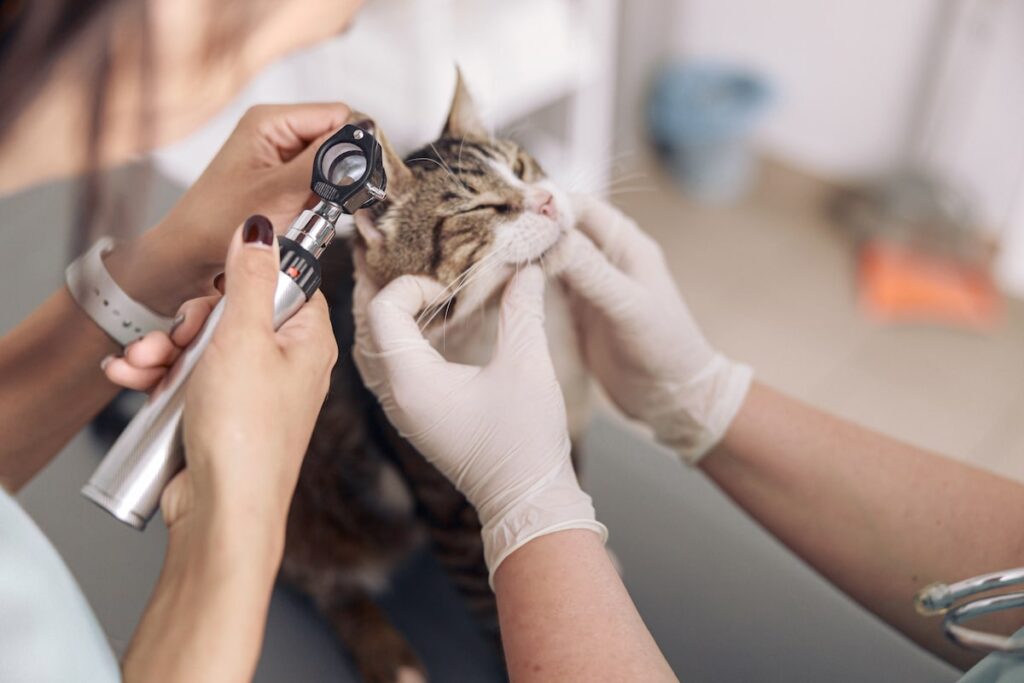 Spices may be remarkably useful in enhancing the aroma of human foods. However, certain spicy herbs have proven dangerous for cats. Notable mentions include onion and garlic.

Ingesting onion- or garlic-flavored ice creams may cause Heinz-body anemia, a devastating medical condition characterized by the destruction of red blood cells. The disease produces a range of symptoms, including pale mucous membrane, discolored skin, reddish-brown urine, appetite loss, and rapid weight loss. Your cat may also develop fever, fatigue, and even seizures. Heinz-body anemia in cats is fatal if untreated.

The conventional wisdom is to keep all spicy and seasoned foods out of your cat’s reach. And that includes ice cream.

Dietary emulsifiers are commonly added to ice creams to prevent the formation of ice crystals while also maintaining the overall consistency of the entire product. However, certain products used for this purpose may be harmful to cats.

For instance, long-term exposure to propylene glycol (PG) can trigger Heinz-body anemia. That makes the compound just as toxic to cats as garlic and onion.

Besides propylene glycol, dietary emulsifiers like carboxymethylcellulose (CMC) and polysorbate 80 (P80) have also been linked to metabolic disorders like inflammatory bowel disease (IBD), obesity, and diabetes.

Cat owners are strongly advised against sharing ice cream with their feline friends despite the often-compelling urge to do so.

As we’ve seen, nearly all ice cream ingredients are potentially harmful to cats. Even healthier ice cream preparations, such as lactose-free and sugar-free ice creams, may still be laden with compounds known to be poisonous to cats.