You’ve likely stumbled upon numerous publications describing spinach as a superfood. That’s mainly due to the vegetable’s incredible nutritional profile.

Spinach abounds in nearly all the nutrients that humans require in their diet. These range from essential vitamins to minerals and even antioxidants.

Therefore, it shouldn’t be surprising to come across a pet parent freely sharing spinach with their canine friends. But can dogs really eat spinach?

Can Dogs Have Spinach?

Spinach doesn’t seem to contain any compounds known to trigger immediate medical emergencies in dogs. But the real reason to consider integrating this vegetable into your dog’s diet is that it can provide tons of health and nutritional benefits.

Spinach is rich in vitamins A, C, and K. The vegetable is also a great source of dietary fiber, iron, potassium, folate, and a host of other useful minerals.

Related:  Can Dogs Eat Scallops? The Ultimate Guide to Feeding Scallops to Dogs

Besides, your dog can benefit from the many antioxidants in spinach. Common ones include beta carotene, vitamin C, and flavonoids like lutein and zeaxanthin. 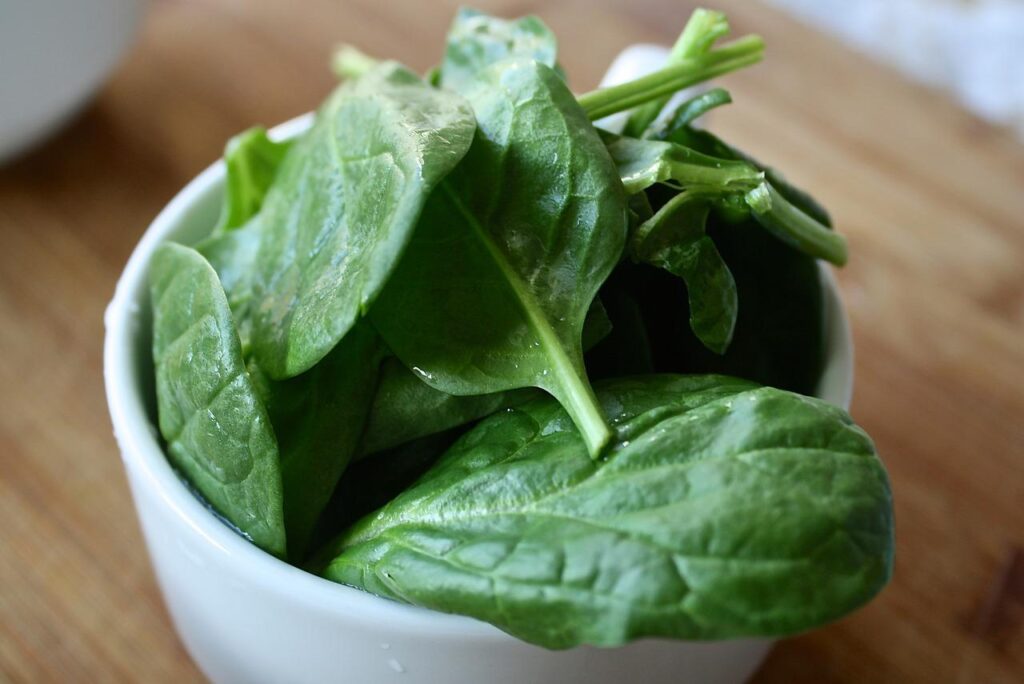 Spinach, scientifically known as Spinacia oleracea, is an edible leafy green vegetable native to Central and Western Asia. The vegetable is particularly widespread in Persia or modern-day Iran.

What Nutrients Does Spinach Provide?

Raw spinach is largely made up of water (91%), carbohydrates (4%), and protein (3%). The vegetable also contains negligible amounts of fat.

Spinach boasts a higher concentration of vitamins and minerals than many plants in the same taxonomic family. The most predominant ones are vitamins A, C, and K, as well as the minerals magnesium, manganese, folate, iron, and potassium. Besides, the vegetable provides moderate amounts of all other B-complex vitamins, dietary fiber, sodium, zinc, phosphorus, etc.

What Are Some Of The Health Benefits Of Spinach For Dogs?

1. Spinach Is Good For Digestion

2. Spinach Is Good For Hydration 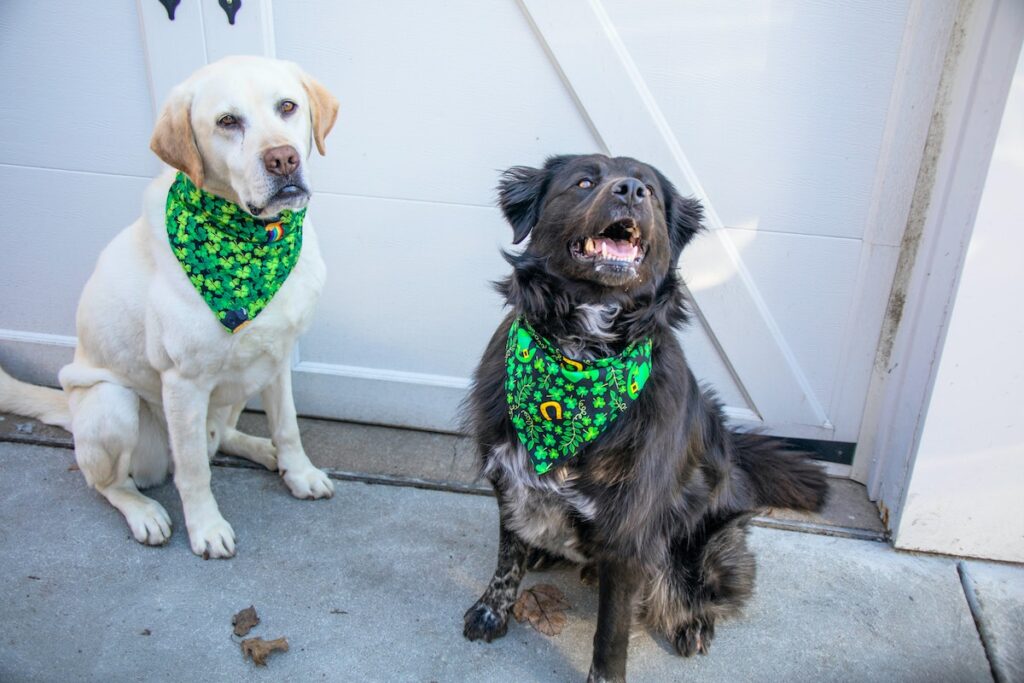 Like most vegetables in the Amaranthaceae family, spinach boasts a high water content. The vegetable may work alongside other moisture-rich dog foods to keep your pooch hydrated.

Spinach contains considerable amounts of plant proteins. The combination of protein, fiber, and water can be instrumental in preventing unhealthy weight gain in dogs.

Related:  Can Dogs Eat Wheat Bread And Other Treats?

The three nutrients are famous for their filling effects. Therefore, they can work collectively to support weight loss by suppressing hunger pangs and appetite.

4. Spinach May Support Your Dog’s Vision

Dogs, like humans, are susceptible to age-related macular degeneration. Fortunately, giving your senior pooch spinach-based treats may help keep his vision in check. That’s due to the vegetable’s abundance in vitamin A equivalents like carotenoids, lutein, and zeaxanthins.

5. Spinach May Protect Your Dog’s Coat

Spinach is high in vitamin C, a vitamin linked to improved skin health. Foods rich in vitamin C can rejuvenate your dog’s coat by reducing certain markers of premature aging.

Spinach contains significant amounts of all the minerals known to regulate blood pressure, including potassium and magnesium. Therefore, supplementing your dog’s diet with this vegetable might help lower hypertension and associated conditions like heart disease and stroke.

Does your dog suffer from blood clotting disorders? Does he bleed excessively even after sustaining a minor bruise? If yes, then you might consider serving him spinach occasionally.

Spinach is abundant in vitamin K1, a water-soluble vitamin essential for blood clotting. The vegetable also provides a decent amount of iron, a mineral that promotes blood circulation by creating hemoglobin.

8. Spinach May Be Useful For Pregnant Dogs 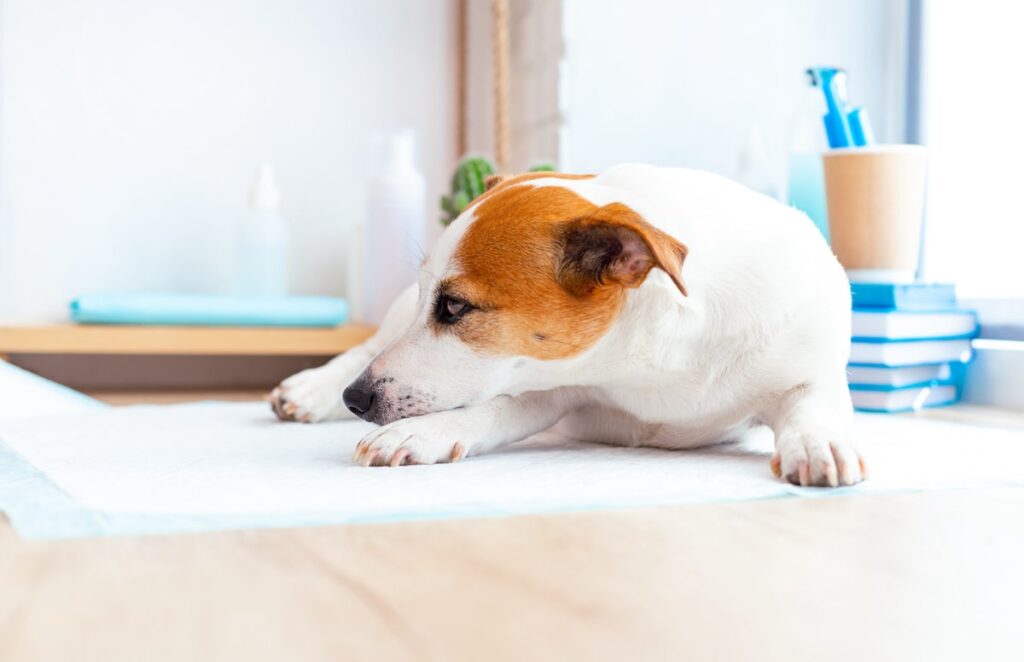 Spinach is high in zinc and folate, minerals involved in normal growth and development during pregnancy. The two minerals are also involved in various cellular functions.

9. Spinach May Boost Your Dog’s Immunity

Like its other cousins in the Amaranthaceae family, spinach boasts several antioxidants. They include vitamin A, vitamin C, and various flavonoids.

Consuming antioxidant-rich foods is linked to lower risks of chronic diseases. These compounds are particularly effective against inflammatory conditions like arthritis and cancer.

What Are The Potential Issues With Spinach For Dogs?

Spinach is quite high in oxalates, compounds notorious for inhibiting the absorption of iron and calcium in the intestines. Therefore, the vegetable might act as an antinutrient if fed to dogs in excess.

Besides, the combination of calcium and oxalates (both of which are significantly high in spinach) may cause kidney stones in dogs.

You can minimize the risks of oxalate poisoning by cooking spinach before serving it to your dog.

The benefits of feeding spinach to dogs far outweigh the potential downsides. But as with any vegetables, spinach will only be useful to your dog if served in moderation. And while the vegetable can be consumed raw, it’s safer to boil it before feeding it to your pooch. Boiling diminishes the adverse effects of oxalates, the harmful compounds in spinach associated with kidney stones.