Cinnamon is prized for its high nutritional value, therapeutic properties, and warming aroma. The spice has been used in folk medicine and traditional cuisines for thousands of years.

Cinnamon also credits its popularity to its high versatility. Besides being commonly incorporated into food recipes, the spice can also be consumed as an herbal tea or infused in confectionery products.

In light of cinnamon’s amazing health and dietary benefits, it’s natural to think that dogs can enjoy this spice too. But can dogs have cinnamon?

Fortunately, dogs can safely eat cinnamon. Cinnamon is non-toxic to dogs. The spice doesn’t contain any chemicals known to cause immediate medical emergencies in dogs and even cats. If anything, cinnamon may actually offer several health and nutritional benefits to your pooch.

However, note that cinnamon is only safe for dogs in small amounts. In large quantities, the spice could irritate your dog’s mouth and stomach, inducing a host of gastrointestinal side effects.

Read on as we delve deeper into the potential benefits and risks of cinnamon for dogs. 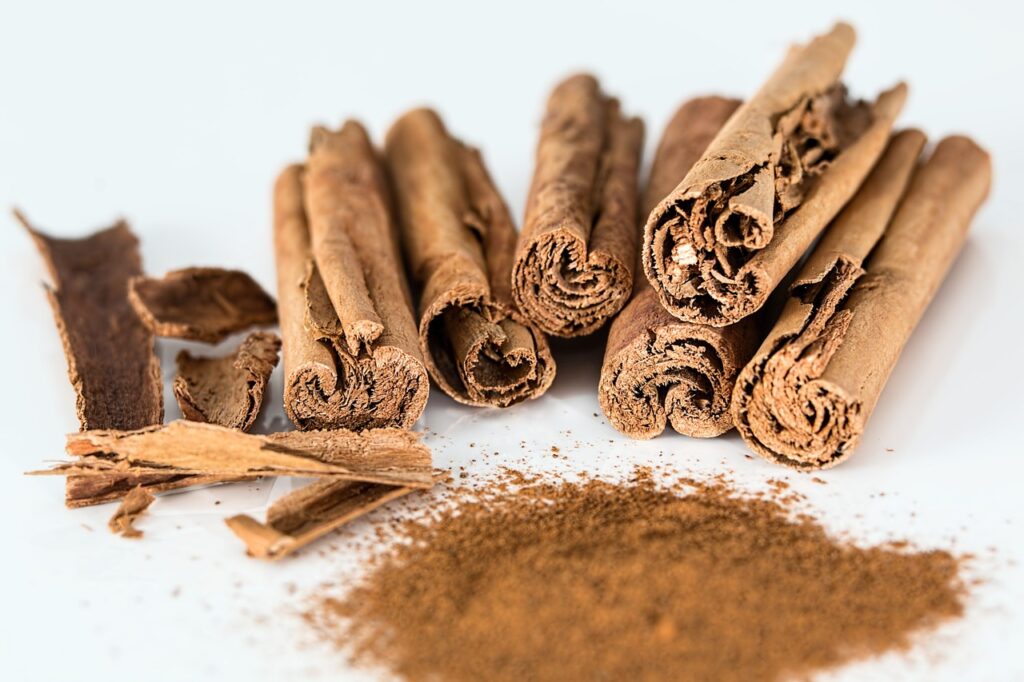 Cinnamon is the name for several tree species that belong in the genus Cinnamomum, with the species Cinnamomum verum widely considered the true cinnamon and Cinnamomum cassia the most widespread species. The word may also imply the commercial spice products obtained from the inner bark of trees in the Cinnamomum genus.

Cinnamon derives its delectable aroma from various components of its essential oil, the principal ones being cinnamaldehyde and eugenol.

There are two different cinnamon varieties found in most markets. They include Cassia Cinnamon and Ceylon Cinnamon.

Cassia cinnamon is the most common cinnamon variety you’ll come across out there. It comes from the species Cinnamomum cassia, which is native to China. This cinnamon cultivar sports a dark brown color. It’s rougher in texture and produces thicker sticks compared to its Ceylon counterpart. And due to its relative abundance, Cassia cinnamon is fairly more affordable than Ceylon cinnamon.

Ceylon cinnamon comes from the tree species Cinnamomum verum, which is native to Sri Lanka. The tree is relatively lighter in color and generally sweeter. This cinnamon variety is fairly scarce and is usually only available in healthy food outlets and specialty spice markets. 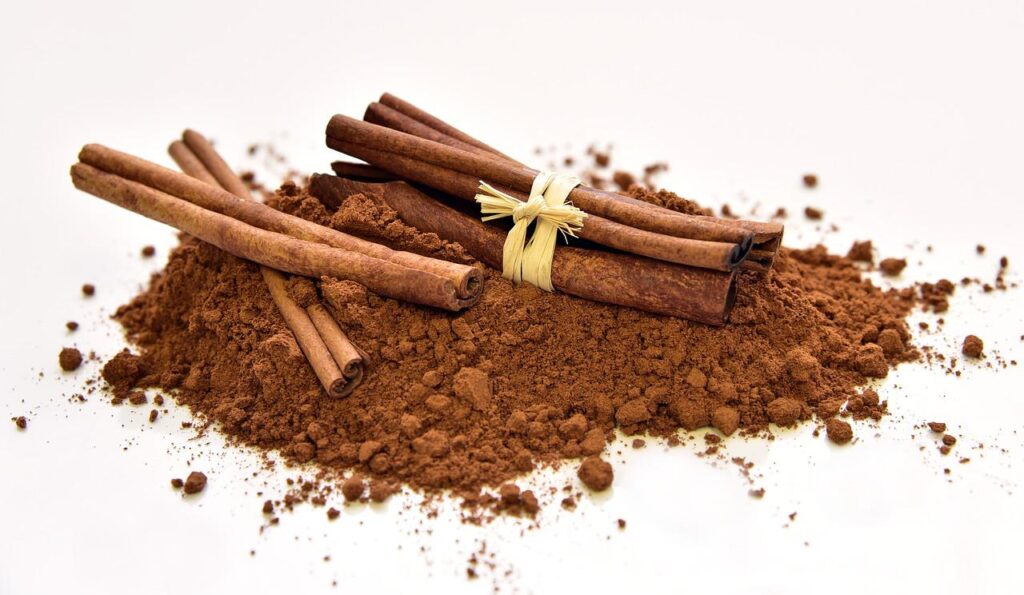 Ground cinnamon comprises about 11% water and 81% carbohydrate content, which includes dietary fiber and simple sugars. Other notable nutrients in ground cinnamon include protein at around 4% and fat at 1%.

Cinnamon also contains decent amounts of essential vitamins and minerals. They include vitamins A, B1, B2, B3, B6, B9, C, E, and K, and the minerals calcium, magnesium, iron, phosphorus, potassium, sodium, and zinc.

Cinnamon is incredibly high in dietary fiber. Out of the spice’s 81% carbohydrate content, more than half comprises dietary fiber.

For starters, the nutrient gets fermented in your dog’s gut, where it helps nourish the animal’s gut microbiome.

Fiber can also bulk up your dog’s stool. This might encourage regular bowel activity, thereby relieving indigestion and constipation.

Cinnamon boasts a high moisture content, with up to 11% of ground cinnamon comprising water. Feeding moisture-dense foods to dogs is a proactive way of preventing dehydration.

During periods of illnesses marked by acute inappetence, dogs may have trouble drinking plain water. In such cases, supplementing with moisture-rich foods like cinnamon may go a long way in helping the animal achieve his recommended daily intake of water. 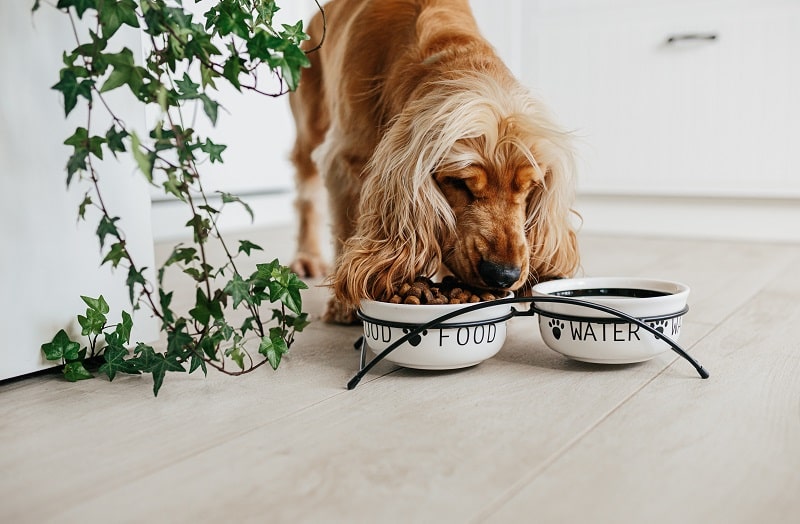 The combination of water and dietary fiber has been shown to lower the food portions an animal can down in one sitting by inducing longer sensations of fullness between meals.

This may subsequently help to reduce weight loss or prevent unhealthy weight gain.

4. Cinnamon May Lower the Risks of Diabetes

So, by increasing insulin sensitivity, cinnamon plays a direct role in guarding against type 2 diabetes.

Cinnamon reduces the body’s overall levels of “bad” LDL cholesterol and triglycerides, while stabilizing “good” HDL cholesterol. This can have positive effects on blood pressure, ultimately reducing the risks of heart disease.

Besides, cinnamon is loaded with several minerals that regulate blood pressure and heart rate. Examples include magnesium and potassium.

6. Cinnamon May Guard Against Chronic Diseases

Not only is cinnamon effective at lowering the risks of heart disease and type 2 diabetes. Studies have shown that the spice may also minimize the occurrence of many other chronic illnesses. That’s due to its abundance in antioxidants, compounds that counteract oxidative damage to the cells caused by free radicals.

Cinnamon contains polyphenols, a group of powerful antioxidants noted for their anti-inflammatory and antitumor properties. The plant also produces compounds that inhibit the accumulation of the protein tau in the brain, which is one of the risk factors for neurodegeneration.

Related:  Why Do Dogs Sleep So Much?

What Are The Risks Of Feeding Cinnamon To Dogs? 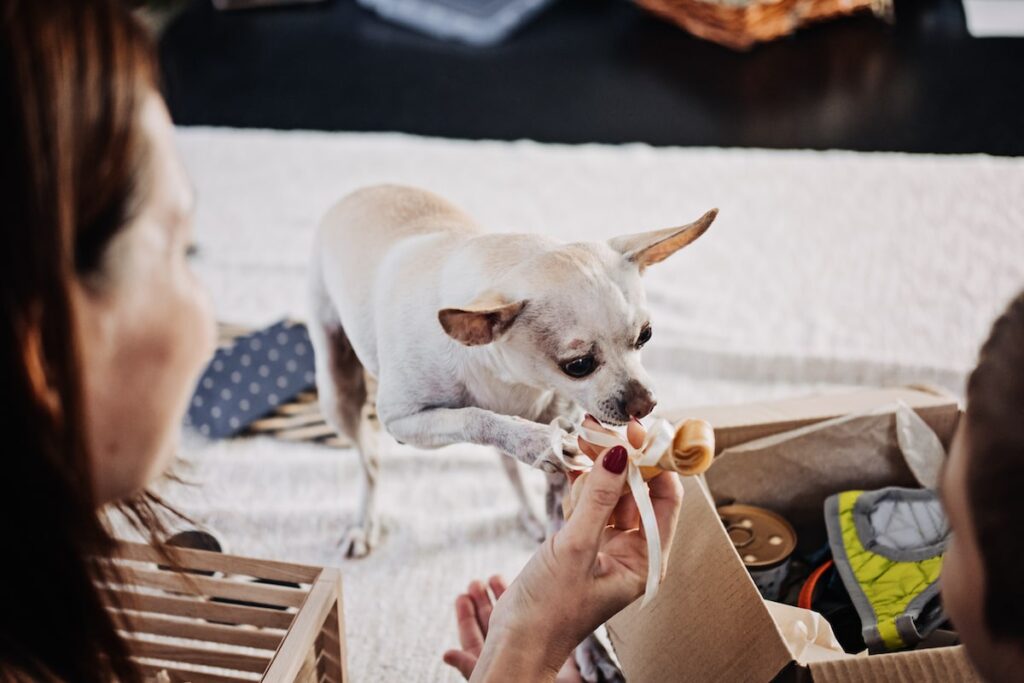 While cinnamon packs a wide variety of health and nutritional benefits for dogs, the spice is by no means no risk-free. As we mentioned at the beginning, cinnamon can trigger a host of gastrointestinal adverse effects if consumed in large amounts. Common negative effects of ingesting cinnamon include;

Cinnamon may also present symptoms of respiratory distress if inhaled. Some of the symptoms to expect include;

Last but not least, note that cinnamon is high in coumarin, a compound that has been shown to cause liver and kidney toxicity in humans if ingested in large amounts. Therefore, giving your dog large quantities of cinnamon may predispose him to liver or kidney failure.

Cinnamon is a highly nutritious spice that can provide several medical and nutritional benefits to your dog. But like all plant-derived compounds, cinnamon is only safe for your pooch if fed sparingly.

The conventional wisdom is to sprinkle a few grams of cinnamon powder over your dog’s regular diet, then observe the animal closely for side effects over a 24-hour period. Most importantly, remember that cinnamon should only be fed to dogs occasionally and not as part of the animal’s regular diet.