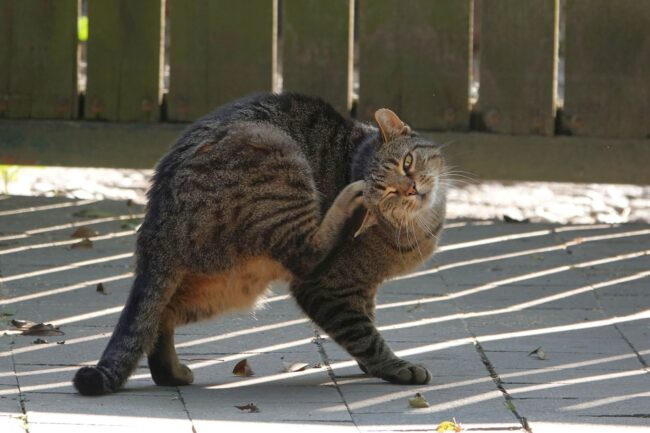 Cat Scratching Itself Raw? Here’s What It Could Mean!

Cats are experts at hiding any early signs of a health problem. This is why feline owners are also worried about any change in their behaviors. One such concern is excessive scratching. While cat scratching is a normal and healthy cat behavior, it may become a matter of worry when it gets excessive.

Some pet owners report that their cats won’t stop scratching. In this post, we try to understand the reasons why your cat is scratching itself raw. We also discuss how much scratching is normal and what you can do about stopping the cat from doing it excessively.

Cat Scratching Itself Raw? What It Means

Some cats develop skin allergies, the most common being flea-related. In cats with such allergies, flea bites trigger itchy skin that makes the cat uncomfortable. You can see the pet scratching itself raw out of this itchiness. Another common reason for excessive scratching is food allergies, particularly after flea treatment.

Dermatitis is a skin condition in cats that cause red and itchy bumps. Ear mites and abscesses are other problems causing itchiness and scratching. An abscess is often caused by ringworm that transmits easily to other animals. Some other dermatology problems are also responsible for itchy skin that may result in your cat scratching itself raw.

Cat Scratching Face Until It Bleeds – Should You Be Worried?

While cat scratching is often normal and not a matter of concern, sometimes the pet scratches the face until it bleeds. Aggressive scratching with sharp claws can lead to further complications which is why it is vital that you identify the reason for excessive scratching.

The most common cause is extreme itchiness from mites and infections. Some other reasons include inflammation from insect bites, irritation and allergies. If your cat scratches its face until it starts bleeding, you should first clean the wound and try not to keep it open. Next, you should monitor the cat’s behavior to notice any signs of itchiness on the face. A visit to a vet may help rule out the possibilities for excessive scratching and help you avoid any further problems from this behavior.

Whenever a cat scratches itself from itching, it also damages its coat and skin. Excessive scratching or licking can cause hair thinning, fur loss and even skin injury. Such a problem is called the cat scratching itself raw. Scratching fur off face is normal behavior but skin damage means something serious is going on.

If your cat has developed a kind of allergy or irritation, you can see some redness and inflammation near its face and neck. You can also see it scratching the fur off and bleeding around these areas. In such a case, you should take the cat to a vet at the earliest. The vet can examine the cat for signs of skin allergies and find out the reason behind excessive scratching. Once the underlying problem is identified, proper treatment can be put in place to stop this behavior.

How To Stop A Cat From Scratching Itself?

To stop the cat from scratching itself raw, you should first identify the underlying cause for the behavior. If it is from a food allergy, the type of food causing the allergy should be identified. On the other hand, if a parasital infection is responsible for too much scratching, the treatment involves the use of proper antiparasitic products administered in different forms depending on the condition.

If you don’t see any signs of irritation or allergies on the skin, your cat might be scratching because of stress, anxiety or boredom. It might not experience itching but scratch itself out of anxiety to do something. To address this problem, pet owners can introduce things that keep their day interesting. Sometimes, adding a kitten to the household works as well.

When the scratching is associated with skin allergies, irritation from stings and bites or any bacterial or parasitical infection, products that work for these problems help you stop or reduce the behavior. Your vet may recommend rinses and shampoos, antibiotic medication and topical sprays and ointments as a part of the treatment for the problem responsible for scratching.

How Much Scratching Is Normal For A Cat?

Scratching is such a normal part of a cat’s behavior that it often gets difficult to decide how much is normal and when you should worry. Happy and healthy indoor felines spend up to one-third of their day licking and scratching themselves. So, most pet owners don’t realize when this behavior gets abnormal or signals something serious.

If your cat’s licking or scratching behavior becomes abnormal, it is likely that you notice it. However, the first clue is the cat’s fur disappearing in strips along the stomach and back. Such cats are also likely to show red, irritated spots which suggest there is an underlying problem causing too much scratching.

Pet owners should monitor their cat behaviors regularly to notice any signs of abnormality at the earliest. Pay attention to their coat and skin to find out if the cat has damaged them. If the cat scratches itself too frequently and shows irritation on the skin, you should take it to the vet for examination to treat the underlying problem.

How To Euthanize A Cat With Over The Counter Drugs? UPDATED 2021