Whether you’re thinking of getting a new family member in the form of a charming greyhound or just quenching your idle curiosity — you have found yourself a place of greyhound essentials!

Belonging to Sighthounds, a hunting breed, these are quite the slender and tall type. It looks that are intimidating and speed that is difficult to keep up with; listed below are the most important pointers about greyhounds.

Well, they are dogs at the end of the day, so yes, greyhounds bark. However, this tendency is not nearly as much as in the other breeds. Besides, it also depends on your particular greyhound because even within the same breed, different dogs have individual personalities.

It is possible that your greyhound might bark at an approaching car, but seldom at the doorbell or a passerby. This dashing breed tries to keep the noise at a bare minimum, and sometimes, figuring out the bathroom breaks is a guessing game.

Are you thinking about your greyhound switching personalities in the company of other dogs? Worry not! Their meetings turn out to be just as soft and calm with occasional roo-ing.

However, if you do find your loyal company barking, there could be reasons ranging from emotional to physical. In any case such as these, worry not because we have got you covered.

Unlike a lot of other dog breeds, greyhounds are particularly known for being rather sorted out and calm. To answer your question directly, no, you will not find greyhounds aggressive at all.

While younger ones might snarl a little or growl, it will only be to get familiar with their surroundings. Once that is set and done, you will have your typical charming greyhound in your company!

With a few commands and training practices or routines, you will be able to bring back your pet to normalcy in no time. You could either look up these practices on the internet or contact a trainer if you do not already have one.

Taking sturdy and strong stances around your greyhound can reassure them that you are the one in control. This will be especially helpful if the reason for their aggression is fear, anxiety, or confusion. Soothing and petting them calmly can also be quite helpful if facing this issue.

Our dearest companions are also sometimes quite funny in their mannerisms! Just like when our teeth chatter, it could be a response to feeling cold; there is a reason behind greyhound teeth chattering as well!

Go ahead and be surprised as you find out that most times than not, greyhounds tend to chatter their teeth to show excitement, unlike the other breeds that usually wag their tails from one end to the other.

Sure, it sounds scary as though the sound of a rattlesnake, but their adorableness hides in this uncontained gesture. So next time you find your greyhound’s teeth chattering, know that someone is in the mood to goof and play around!

However, there might be a little more to it than just the fun-hair part.

As freshly mentioned, the reason behind every gesture can vary from breed to breed, or even dog to dog. Similarly, there can also be several emotional reasons for teeth chattering.

A concept known as displacement language is practiced by dogs to communicate to one another that there is a potential threat around. Meaning, the teeth chattering comes from the emotional standpoint of fear or greeting up protectively, quite contrary to the reason we first spoke about.

But along similar lines, this could also be a response to pain or distress being triggered within the greyhounds. Just like humans, dogs feel anxiety and confusion, too, the emotional factor of which could further result in this physiological behavior.

As obvious as it is, responses be beyond just the emotional stimuli. So moving on to the physical reasons for teeth chattering, firstly, we shall look at their senses and reception.

Quite so interesting is the fact that your greyhound’s sense of taste and smell is far superior to yours. So the chattering of teeth could simply be a result of something unfamiliar that came in contact with these senses.

Burning up of skin and watery eyes makes you figure out that you have a fever. Similarly, when you see your greyhound’s teeth chattering, do not let the possibility slip through your mind that there might be an underlying illness or disease.

Don’t be under the misconception that humans are the only ones who have to go through the pain of bleeding gums and oral hygiene issues!

Usually, greyhounds can stand up to zero degrees celsius, but nonetheless, it is always better to be safe than sorry! So when in doubt, simply book an appointment at the vet’s, who will help you arrive at a concrete configuration and a solution for your problem too!

In any case, make sure to keep a check and observe your favorite companion’s related behaviors. Right from the amount of drooling, to a possibly foul odor, to bleeding mouths, all can help you add to clarity in understanding the problem. 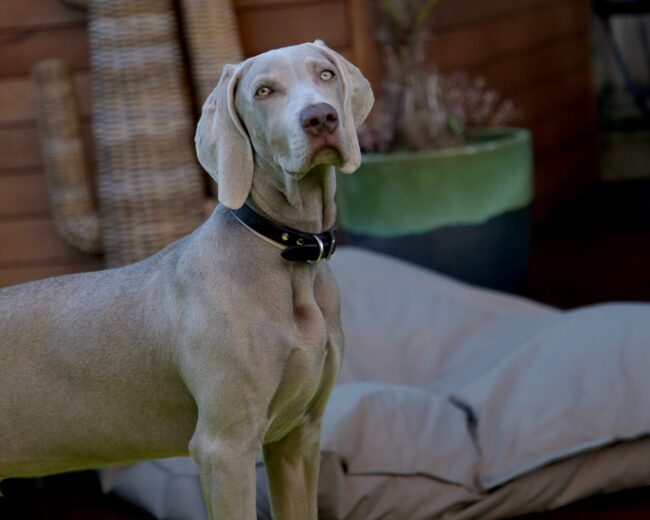 Greyhound Barking For Attention – What Should You Do?

Touching upon something you saw before, greyhounds are very sorted out and one of the rather calmer breeds of dogs. Often times, barking is not one of their traits that can be of trouble to you.

However, if you do find your four-pawed buddy barking for attention, it could probably be because of the discomfort they might be facing. Alternatively, the feelings of anxiety, confusion, or unfamiliarity could also be causing this.

In any of these cases, your first act should be to provide your undivided attention. By the tone and intensity of their barking, you might be able to figure out whether it is out of distress or a casual reason.

In the case of the first reason, try giving your companion calming and soothing pats. Run your hand along their backs that will temporarily cool them down.

Following this step, contact your vet, who will be able to guide you through step by step diagnosis. That is, of course, in the case of going to the vet is not possible at the moment.

If your greyhound is barking incessantly simply for a casual reason, try to repeat the training steps, such as giving them a task.

Dogs are respecting and loyal individuals, and often times respond best to commands. This can work as a distraction, and soon the barking will cease!

Again, given the fact that this is a breed that does not usually resort to barking, greyhound barking at night could be a distressful call.

Extremity in weather can cause all creatures discomfort, and your buddy is no exception! Their ears are the quickest to feel it, followed by nose, tail, and areas of comparatively thinner skin.

The first act could be to try and bring the heating system or air conditioning to the temperature which your pet is accustomed to.

Secondly, if you find that temperature is not the problem, it could be the feeling of being stranded or detached. While greyhounds are a courageous and brave breed, it is normal for them to be afraid of the dark too!

In such a case, your best option is to make them feel inclusive. Open your arms (and some bed space) to your loyal friend, and you both will rest better than ever! Alternatively, you could even try turning on a couple of lights, so the fear of darkness is taken care of.

Just like before, you could also try giving them commands, carrying out motions and gestures of comfort, or feeding them to create a distraction. However, if there is no positive response to that, the reason behind your greyhound barking at night could be something internal or physical.

You could get in touch with your vet, who could provide you with some temporary solutions until going to the hospital is a possibility.

Greyhounds: A calming presence and a loyal companion

Regardless of whether you are looking to bring a greyhound into your life or have one already, know that this ride is going to be an interesting one.

Greyhounds are creatures of dignity and grace. All they want to do on an average day is to spend time in your presence while being snuggled up under the couch.

Elegant as they are, the breed is just as athletic and will accompany you in your choice between slacking off or going for a run. If you are a family of sensitive and soft-spoken individuals, a greyhound will be an addition you know you will not regret!