Canines possess this tendency to try out new things, especially when they’re young or are hungry. So it shouldn’t be too surprising for you when you find out that your dog has eaten maggot-infested food.

While the chances are scarce, the possibility is still there. In this article, learn what to do when you discover your dog eating maggots.

Dog Ate Maggots – Can Maggots Affect A Dog from Inside?

Maggots are larvae of flies and blowflies. They are still in their early stages of development and one day will become flies themselves, just like how caterpillars develop into butterflies.

When flies fly from food to food, they leave behind the larvae to feed and grow in it. The best place for growth is rotten meat since there’s minimal disturbance or competition for food.

The maggots may even aid in maintaining your dog’s health since they’re in proteins. But the real risk comes from the food that the maggots were infesting. If they were consuming rotten meat, then it would cause them problems and not the maggots.

So the rotten meat may have toxic chemicals that will hurt your dog. Things would get worse if something poisoned the animal before its death or something similar.

So always check for the food that the maggots colonized and the dog later ate.

With that said, consuming a higher amount of maggots may also cause some level of discomfort. The dog may experience stomach ache because of the excessive amount.

Later he will vomit them out to relieve himself. So under normal circumstances, there’s nothing problematic.

When to See a Vet?

Maggots aren’t poisonous, and they aren’t likely to cause any severe complications either.

However, since maggot is a foreign object to your dog’s stomach, it’s better to consult with a vet over the phone. It is imperative if you see the discomfort in your dog after consuming maggots.

The first thing you should do is trace down the rotten meat or the food item that the maggots were infesting. This fact will largely determine what type of treatment the dog would need.

Your vet will ask you about the source before recommending medications. If it was a dead squirrel, you should communicate the same to your vet.

In most cases, the vet will advise you to feed the dog proper water and let him sleep for the day. The maggots will either come out through vomiting or defecation.

If the dog has consumed a higher number of maggots, the vet may advise you for induced vomiting. It requires administering a proper concentration of hydrogen peroxide solution.

The solution will irritate your dog’s stomach and force him to vomit out the stomach contents. Then all you need to do is feed him an adequate amount of nutritious food and water to help him recover quickly. 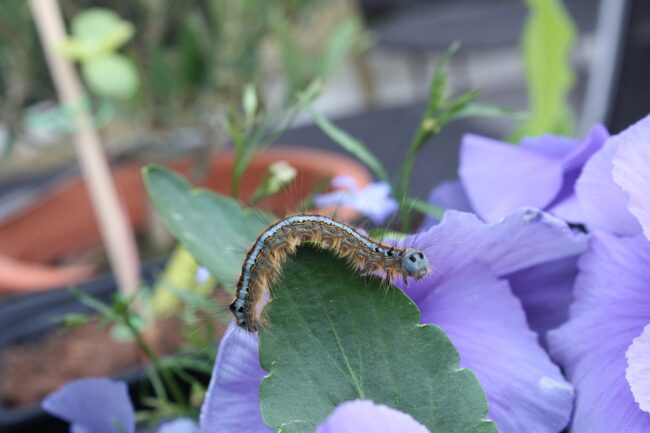 What if Dog Had Wounds?

Things might get quite complicated if the dog ate maggots when it had internal and external wounds.

Maggots feed on fresh flesh, too, and would pounce on any wounds that they come across. So if your dog was eating a lump of rotten meat infested with maggots, chances are some larvae have found their way into the dog’s wounds.

They will then start to eat the flesh from the wounds and enlarge it. If it’s an internal wound either in the mouth area or bowels, you will not even know that maggots are infesting your dogs from the inside.

Within a few days, the count of maggots can increase manifold to several thousand.

So in such cases, you must rush your dog to the vet and have him checked up.

If the vet finds traces of maggots in the wound area, he will apply liquids to take the larvae out. The fluids or any dressing he might do will cut out the supply of oxygen. Thus, the larvae will suffocate to death and wash out along with the liquid.

The vet may also administer antibiotics and tissue healers to speed up the healing process.

What if Dog Ate Maggot-infested Poop?

We’ve already stressed that maggots are not the problem; it’s the food or substances they were infesting pose as the problem.

So when your dog consumed maggot-infested poop, you should be worried about the poop instead. Dogs do tend to eat poops of other animals, which in technical terms is called Coprophagia.

The stool might contain parasites and bacteria that would harm the dog. In such cases, the dog will suffer from mild to severe stomach ache. These symptoms will be visible to you.

Depending on the parasite, it may cause the dog to develop diarrhea. So there’s nothing much you can do other than treating your dog for diarrhea.

Likewise, the complexities are different for diseased wild animals and rotten meat. The dog will not tell you where it ate the maggots from; you must find the source yourself.

Maggots aren’t poisonous or toxic to dogs. So it would help if you didn’t freak out when you see your dog eating food infested with maggots.

Some breeds of dogs are inherently more attracted to rotten meat and similar objects than others. So there’s nothing much you can do as a pet parent.

The dog will vomit out the maggots if consumed in higher amounts. But it would be best if you took appropriate measures in case the dog was wounded or is facing a stomach ache because of the rotten meat.

To prevent your dog from consuming such food items, you must check for dead animals inside your house and in your garden area. That’s where most birds are found dead and later get infected by maggots.