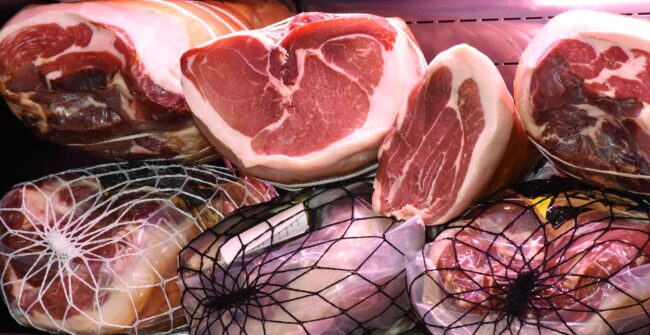 Does it sound like it is okay to eat raw bacon? Is there anything that could be wrong with it when a dog eats it? Find out!

What’s wrong with raw Bacon? We’ll tell you more about it. Raw Bacon is more dangerous for your furry friends than you may think. This pork product’s high fat and high salt content may prove fatal to a dog’s digestive system and lead to problems like pancreatitis and trichinosis.

So, if you are ever skeptical about whether dogs can eat raw Bacon, let us answer you with a No!

While a little piece or a lick may not be life-threatening for dogs, it is certainly recommended to avoid sharing this snack with your playmates.

Read on to know the dangers of feeding raw Bacon, what to do when the dog eats uncooked Bacon, and the alternatives of raw Bacon.

Here are the most significant ones:

High in sodium and fat

Bacon contains a high amount of sodium and fat. Bacon is a form of pork that is preserved using smoking and salting. This makes it unhealthy for humans to eat, but pooches are affected by its consumption in a way different than humans.

Pancreatitis is an inflammation of the pancreas which is primarily responsible for a dog’s digestion. Pancreatitis hinders the ability of the dog to digest food, thereby, disrupting the digestive system of the furballs.

A primary reason for this disease is poor nutrition (a high-fat diet, in this case).

Raw Bacon also puts your pooches at risk of Trichinella. Trichinella is a parasitic disease that is caused by Trichinella spiralis. This roundworm causes discomfort, inflammation, and pain in the dog’s body.

Bacon is high in fat, so it can easily add a few extra pounds to your four-legged friend. Obesity can lead to long term problems like hypothyroidism and cardiovascular diseases. Obesity may also make your dog lethargic and, therefore, less interested in play.

Due to high nitrate concentration in Bacon, it may also lead to chronic obstructive pulmonary disease(COPD).

That said, you must avoid serving raw Bacon to your canine buddies. But, what if they snuck some bacon off the counter. The solution is to train them early enough so that they do not steal off the human plates. They should be trained to patiently wait for their food to be served.

But, what if the furballs activate their puppy eyes mode and increase their cuteness charm for that Bacon that tantalizes them from their very smell?

Nothing can actually stop oneself from falling for that cuteness, but even in such cases, try to avoid serving Bacon as much as possible. Or, they may experience some pain, difficult bowel movements, or even vomiting. It is best to keep Bacon out of their sight and smell.

Despite taking precautionary steps, what if the dog consumes raw Bacon. First, don’t freak out and stay positive. Sit back and notice the symptoms.

Here are the symptoms to look out for:

Vomiting is the most obvious symptom of discomfort. Vomiting is the body’s natural way of getting rid of the Bacon ingested sometime before. It is advised to call your veterinarian immediately.

Abdominal pain is not so obviously observed as vomiting. However, if your dog is walking in a strange way and reacting when you touch its belly, then it may be suffering from abdominal pain.

Other signs of abdominal pain are abnormal dog posture, whimpering, curling up to protect the belly, swollen abdomen, etc. These are signs that your dog has an inflammation in the intestines.

This is another way for the body to get rid of the indubitable Bacon. This may help the dig to some extent, but it is still advisable to call your vet to confirm normal in the pooches’ body.

A tired dog may signal its upset stomach. If your coach potato is staying on the couch all day and not enjoying its meals and regular activities like playing fetch or going for a walk, then it means that there is something troubling him. It might be due to fever. Thus, don’t delay the visit to the vet.

Are there any alternatives?

Why give something to your dog that causes them health issues. Rather, give the alternative of Bacon to your playmates- chicken, fish, turkey, beef, etc.

Because of Bacon’s high fat and high sodium content, it is advisable to replace it with cleaner and healthier alternatives like chicken, fish, beef, and turkey.

Chicken and turkey are healthier and less fatty, but they are also not devoid of health risks. Be sure to cook them properly before serving to get rid of bacteria. It is also recommended that they derive nutrients from vegetables like carrots, broccoli, cabbage, kale, etc.

Feeding Bacon in the safest way

If you are unable to resist the puppy eyes of your pet, then you may feed only a small amount of cooked Bacon that is drained of excess grease. When it has been cooked properly, then the risk of Trichinella is low.

However, note that you feed Bacon only as an occasional treat to the dogs and only in small amounts. Even if your dog is not showing any discomforts after eating Bacon, remember that just because the dog can eat it doesn’t mean it is safe for them.

As a dog-parent, you must say no to feeding Bacon no matter how convincing those eyes are. Other ways to prevent dogs from eating Bacon are:

Therefore, say no to Bacon as much as possible. The best alternative to Bacon is chicken, which is tasty and healthy. Bacon-flavored treats may also keep the pooches satisfied. It can be served occasionally to treat them for good behavior.