Many people consume tea regularly. Therefore, they keep a healthy stock of tea bags that they can use. So what to do when your dog eats one of these?

You know that tea contains caffeine, and caffeine is toxic to its dogs. It can develop complications over time.

So what are your best options? This article explains what to do when your dog accidentally ate a tea bag lying around.

Tea is something we like to consume, but it’s should not be on your dog’s plate. As you already might know, tea contains caffeine, although not at the same level as coffee.

Caffeine is a central nervous system stimulant that energizes your mood. While it may sound exciting, an overdose of it can have adverse effects. Dogs are much more sensitive to caffeine than humans.

So if they get an overdose of caffeine through the tea bags, they’ll develop specific health issues. Furthermore, caffeine is similar to another chemical component called theobromine, which is also there in chocolate.

This chemical is toxic to dogs, too, and something you shouldn’t be feeding them. Caffeine is most concentrated in green tea bags. Green tea has the same refreshing qualities as coffee.

In an 8-oz cup serving of green tea, you’ll have about 35 mg of caffeine. But the overall amount can fluctuate between 30 to 50 mg for an 8-oz serving. The amount largely depends on the variety of tea plant and how it was processed.

Nevertheless, this amount is higher than other types of tea but far less than coffee.

So teabags pose less of a threat to your dog than coffee, but they are toxic nevertheless.

What is Caffeine Poisoning?

As already mentioned, caffeine is a central nervous system stimulant. The compound reacts with the nervous system, and that’s when you feel more active and energetic.

It blocks receptors of the neurotransmitter known as adenosine. But in higher concentrations, caffeine can backfire. It can lead to hyperactivity and seizures, both of which are signs of caffeine poisoning in dogs.

Therefore, if your dog accidentally ate some tea bags, you need to seek medical attention at the earliest. 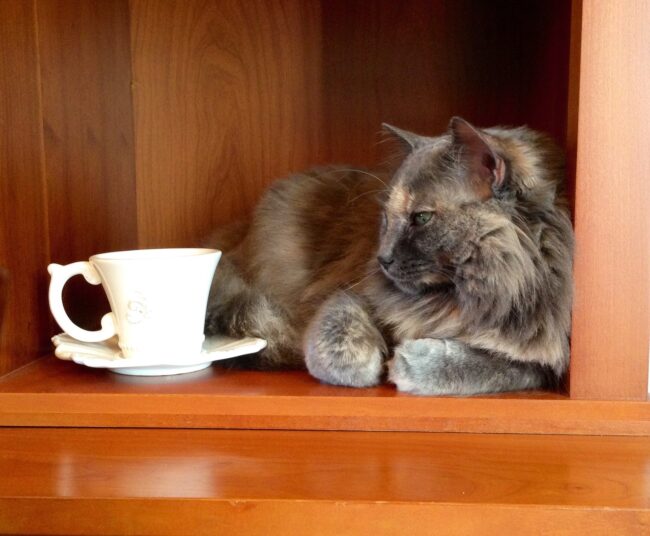 So how would you know that your dog has had an excessive amount of caffeine from tea bags? There are a few symptoms to look out for after your doggo ate tea bags.

Caffeine starts to work its way within 1-2 hours of consumption. It gets dissolved in the bloodstream and interacts with the nervous system by then. If there’s an overdose, your dog may develop neurologic, metabolic, gastrointestinal, and pulmonary complications.

The first thing you might notice is panting and nervousness. Since your dog is sensitive to caffeine, it will develop these signs rather quickly. You can get fooled if you have an active dog and ignore the early signs.

But you should correlate this with the fact that your dog just ate a tea bag and is at risk. Other than panting, dogs will have an increased heart rate and agitation. These canines may run around here, and there is anxiety.

In cases of severe overdose, your dog will experience nausea, vomiting, and even seizures. You should avoid those symptoms as much as possible and take quick steps to ensure safety.

What to do After Dog Ate Tea Bags?

Consumption of a single tea bag isn’t likely to cause such a problem, especially for larger dogs. Regular tea bags contain a tea content of between 1-2 grams.

Your dog will be able to tolerate that amount of caffeine. But things start to complicate when your dog consumes or bites more tea bags. The more number bags it has finished, the greater the risk.

So if you spot the initial warning signs, you should rush your dog to the vet. Upon reaching the clinic, he will closely examine the dog’s condition and learn more about what has transpired leading up to that point.

What Will the Vet Do?

Depending on the particular case, he may suggest either inducing vomiting or gastrointestinal decontamination.

Tea granules can accumulate in the GI tract and release caffeine into the bloodstream. Although these will come out in the feces over time, that might not be an option, and you shouldn’t be waiting for that long in case of an overdose.

The vet may recommend inducing vomiting that will bring out the tea granules along with the vomit. He will prepare a hydrogen peroxide solution that will force your dogs to throw up.

Once consumed, it irritates the dog’s GI tract and forces him to throw up within 10-15 minutes. It can recover up to 50% of the stomach content. So you can bring down the tea content by as much as 50%.

Your vet may also go for GI decontamination. He will use a gastric lavage and insert it through the mouth opening. The endotracheal tube will suck out the stomach contents along with the tea granules.

After the stomach content is out, the vet will administer certain medications like tranquilizer and phenobarbital. These will control the central nervous system and bring it back to normalcy, thus helping your dog recover.

Your dog may become weak because of the above procedures. It will take some time to recover. To accelerate the process, you should feed the dog some nutritious food and plenty of water.

The best way to prevent all the complications of caffeine poisoning is to keep the tea bags out of their reach.

It would be best if you locked it up inside of drawers or cupboards. Because of dogs’ strong smell power, they can easily find and chew the bags if it’s lying around in the open.