For the period you’ve lived with your dog, you’ve come to know the kinds of sounds the animal lets out when he has spotted a potential threat in the compound. You’ve also learned about his favorite meals and toys, as well as his preferred playtime, bedtime, and petting routine.

Now, at the back of your mind, you probably think you’ve got your canine friend all figured out. Well, think again. As you’re about to find out, there’s a lot more about your dog you don’t know.

Go through the following fascinating dog facts and you might just find a reason or two to fall in love with your adorable pooch once more.

Related:  30 Facts About Cats You Didn't Know (Expand Your Knowledge)

According to a study conducted by Cornell University, humans domesticated dogs anywhere between 9,000 and 34,000 years ago.

2. Dogs did not evolve from wolves

The same study by Cornell University found that dogs and wolves evolved from a common ancestor. That’s contrary to the popular belief that the domestic dog may have descended from the wolf. 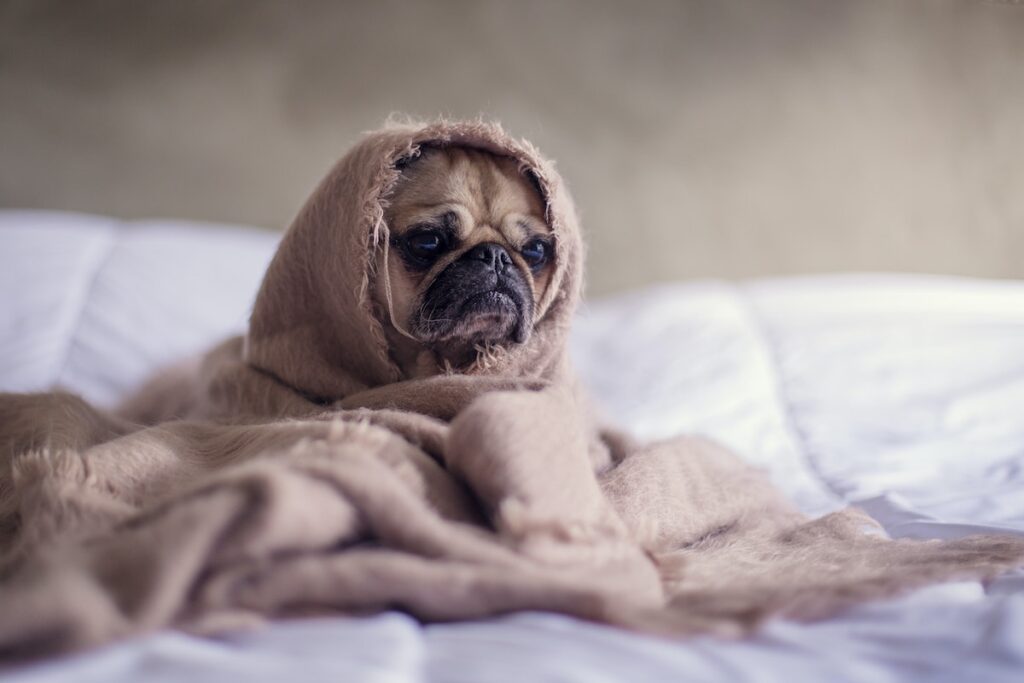 Saluki is the oldest documented dog breed. The breed traces his origins in Ancient Egypt around 329 B.C.E.

We’ve already outlined a genetic similarity between dogs and wolves. But the wolf is not the only animal closely related to the domestic dog. Your pooch is part of a large taxonomic family unit known as Canidae. Other members in this group include jackals, foxes, and coyotes. Individual members of the Canidae family are known as canids. That explains why the scientific name for the domestic dog is Canis lupus familiaris.

6. But they’re not true omnivores

Unlike humans who can live exclusively on plant-based foods, dogs require more meat (up to 80%) than greens in their diets.

7. Chocolate can be fatal to dogs

Chocolate contains theobromine, a compound that dogs cannot metabolize. Ingesting considerable amounts of theobromine can be fatal. The substance tends to be more concentrated in pure dark chocolate.

8. It’s normal for dogs to eat their food twice

As gross as it may sound, it’s not abnormal for your dog to eat his own feces or other fecal matter. This is one of the pre-domestication doggy behaviors that has stuck with them to date. The behavior is more common in puppies than in adult dogs.

9. Butt-sniffing is a dog’s version of the human ‘hello’

Dogs sniff their butts as a way of greetings. Butt-sniffing allows your dog to pick up the unique scents of other dogs, known as pheromones. These scents happen to be secreted in glands located in their rear ends. The smells can reveal a wide range of information about a dog, including his sex, diet, and general health condition.

10. Obesity is the leading health concern in dogs

This underscores the importance of feeding your dog quality pet food always.

11. Puppies are born blind and deaf

Ever noticed that puppies act indifferently to sights and sounds around them? Well, that’s because they’re born blind and deaf.

Puppies can achieve half their adult body weight in just four months. So, you can already tell how big your dog will grow before he’s 5 months old. 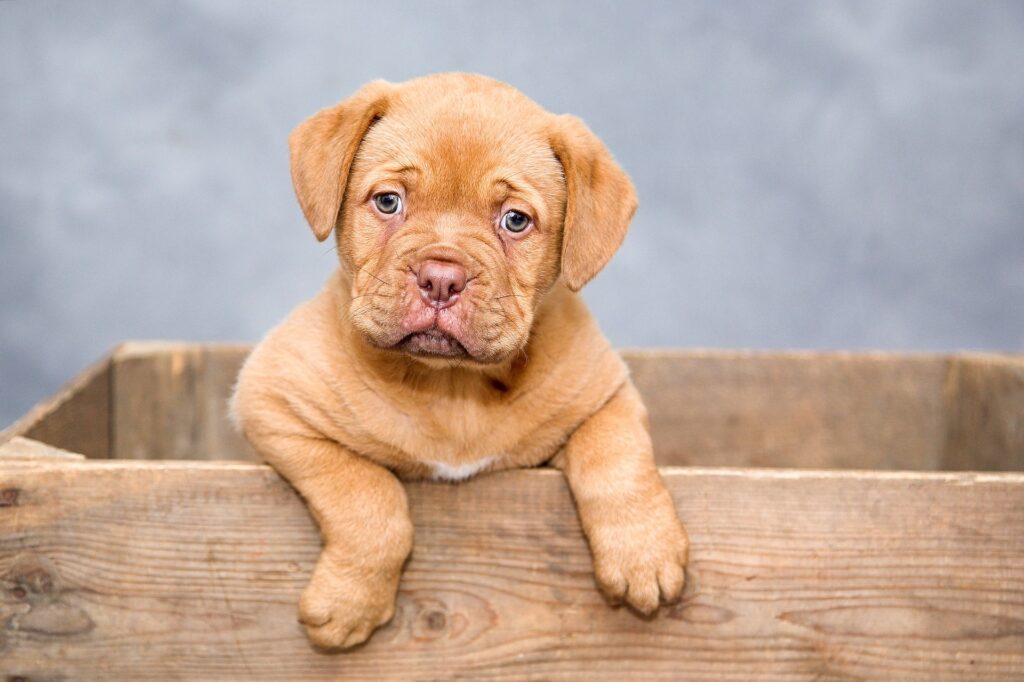 A single bitch and her first litter can produce about 67,000 puppies in just 6 years.

Dogs can accurately tell time differences. With sufficient training and conditioning, your pooch will be able to predict his daily routine provided that those routines remain unchanged.

15. A dog’s sense of smell is far better than a human’s

Dogs can smell thousands of times better than humans. However, their sense of smell is a little diminished when they’re panting.

16. A dog’s sense of hearing is incredibly good too

A dog’s sense of hearing also outshines ours.

17. But their sense of taste isn’t so great

While dogs can smell and hear far better than us, we cannot say the same about their sense of taste. Humans can taste nearly six times better than dogs.

Dogs may have trouble distinguishing shades of red and green. But they’re not truly colorblind and can vividly see yellow and blue colors.

19. Dogs are as intelligent as a two-year-old child

Obviously, you can always train your pooch to become a lot smarter than this.

Intelligence in dogs largely depends on the breed and environmental factors. Border Collies are considered the smartest dog breeds. Other highly intelligent breeds include German Shepherds and Golden Retrievers.

Another fun fact about doggy intelligence worth taking home!

22. Dogs can detect diseases in humans

With ample training, dogs can sniff out diseases like diabetes and cancer in humans.

23. Dogs can detect negative energy too

Ever wondered why your dog acts strangely before a fire or a storm? That’s because they can pick up negative energy in their surroundings. 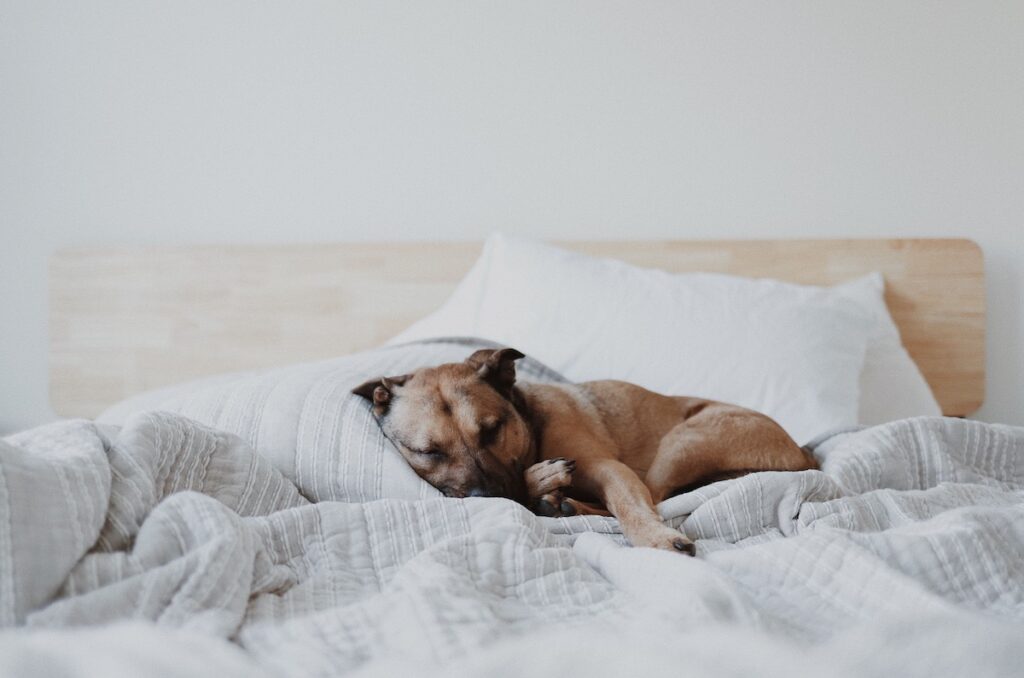 Besides their top and bottom eyelids, dogs also have a nictitating membrane at the corner of their eyes. The extra eyelid is known as ‘haw’ and is used to keep the eyes lubricated.

26. Petting your dog can lower your blood pressure

This is one of the primary benefits of having (and regularly petting) a dog.

27. Dogs sweat on their paws

The reason you’ve never seen your dog wiping sweat off his fur is that the animal’s sweat glands are located in his paw pads.

28. Dogs do not yawn because they’re sleepy

Dogs yawn for various reasons but not sleepiness. Common ones include fatigue, anxiety, and aggression.

29. Dog noses are the equivalent of human fingerprints

Regardless of how identical they may look, no two dog noses are ever the same.

According to the Guinness Book of World Records. The oldest dog was an Australian Cattle Dog called Bluey. He lived from 1910 to 1939 and died aged 29 years and 5 months.

There goes our collection of 30 fun dog facts. Do you have any interesting doggy information you think we ought to have included on the list? Let us know in the comments section below.