Cats are some of the most curious animals. A cat will not hesitate to check out anything that doesn’t belong. Whether it’s a serpent slithering away into the undergrowth or a shoelace hanging out of the closet, your feline friend will be just as happy to investigate it.

Cats are also the funniest pets ever to be domesticated by man. These creatures typically spend up to two-thirds of their time napping, usually in the craziest places. And during their waking hours, cats will resort to all manner of mischief that leaves you wondering whether you’re raising a clown. The animals may climb up the highest trees as if frantically escaping potential predators, only to spring down a second later (always landing on their knees, of course). They may also paw in the air as though they’re fighting ghosts. And once they’ve eaten to their fill, cats may curl up in the narrowest spots in the house and ignore you the whole time, until hunger drives him out again.

Due to their hilarious personalities, it’s not surprising that cats are the inspiration behind thousands of funny jokes, puns, and memes. Here’s a definitive collection of 80 purr-fect cat jokes to help you fall in love with your adorable furball over again. 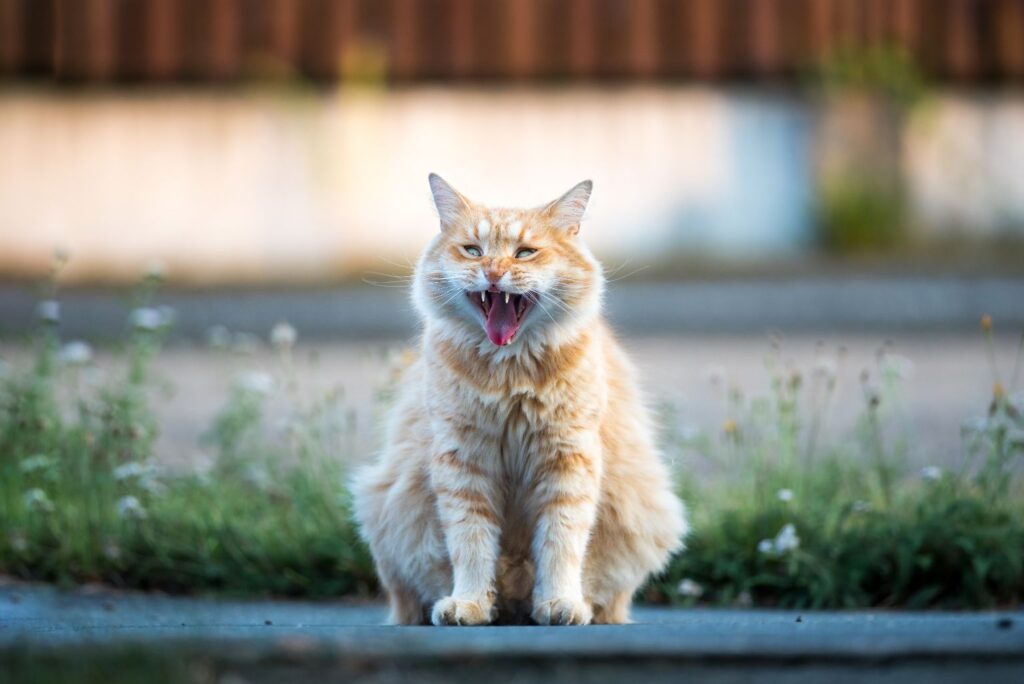 1. Before going after a mouse, what did the dad cat say to his family? Let us prey.

2. Did you hear about the cat who swallowed a ball of wool? She had mittens.

3. Did you hear about the passenger who had to be escorted off the airplane? She let the cat out of the bag.

4. How can a cat uplift a depressed audience? By becoming a meowtivational speaker.

5. How did the abandoned kitty feel when she got a kitten home? Her life felt purr-fect now.

6. How did the Mom Cat know she was pregnant? Her pregnancy test came back pawsitive.

7. How do cat owners know their cat has a good influence on their life? Their cats motivate them to remain paw-sitive in every situation.

8. How do cats resolve an argument? They simply hiss and make up.

9. How do you find a cat owner who is obsessed with her cat? They would always keep their cat be-fur anyone else.

Related:  6 Challenges of Owning a Cat You Need to Know

11. How does a cat decide what he wants from the store? He flips through the cat-alog.

12. How does a cat smell good all the time? When the cat uses a purr-fume.

13. How many cats can you put into an empty box? Only one. After that, the box isn’t empty.

14. How would a cat propose to his girlfriend? He said, Let us get meow-rried!

15. In what kind of weather is a vet the busiest? When it’s raining cats and dogs.

16. What did the cat say after making a bad joke? Just kitten!

17. What did the cat say to the vet when she went for her checkup? I am not feline good!

18. What did the cat say when it was confused? I’m purr-plexed!

19. What did the cat say when she got stuck in the hole? Help meow-t!

20. What did the cats do when they realized they had a bad plan? They decided to (cat)-nip it in the bud. 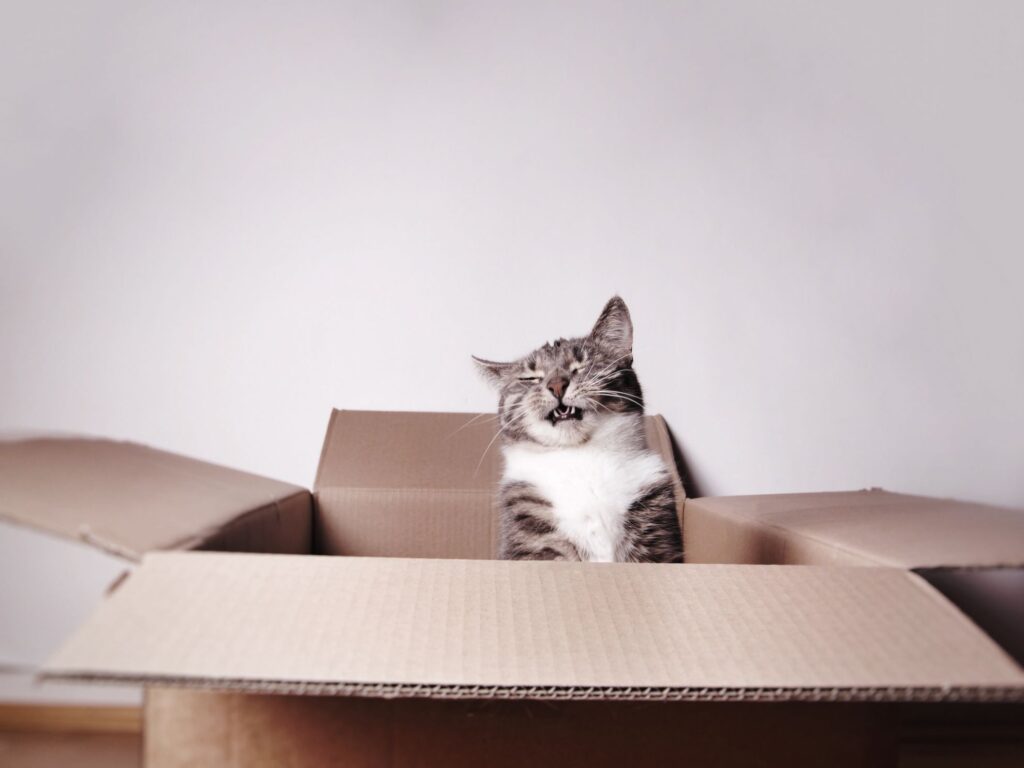 21. What did the cat’s mother say to her when she was rude? She asked her to be paw-lite.

22. What did the kitten have at her birthday party? A pounce house.

23. What did the mama cat to the cat when she birth to six cute puppies? Con-cat-ulations!

24. What did the thug cat’s friends call him when he got caught by the police? They called him a pur-patrator.

25. What do baby cats wear instead of using the litter box? Dia-purrs.

27. What do cats look for in a boyfriend or girlfriend? A great purr-sonality.

28. What do cats love to do in the morning? Read the mewspaper!

29. What do you call a cat who lives in an igloo? An eskimew!

31. What does a cat do every time it feels sick and needs medicines? The cat goes to the fur-macy.

32. What does a cat do when he does not feel too well? He goes to a purr-amedic.

33. What does a cat do when it gets really agitated? It starts throwing a hissy fit.

Related:  Why Do Cats Groom Each Other?

35. What does a cat like wearing at night to sleep? Paw-jamas.

37. What does the kitten’s mother do to make her sleep at night? She reads out some furry tale to her.

38. What happens when you keep too many animals together? They fight like cats and dogs.

39. What is a cat most excited about during Christmas? Receiving gifts from Santa Claws.

40. What is a cat who pretends a lot called? A pawser. 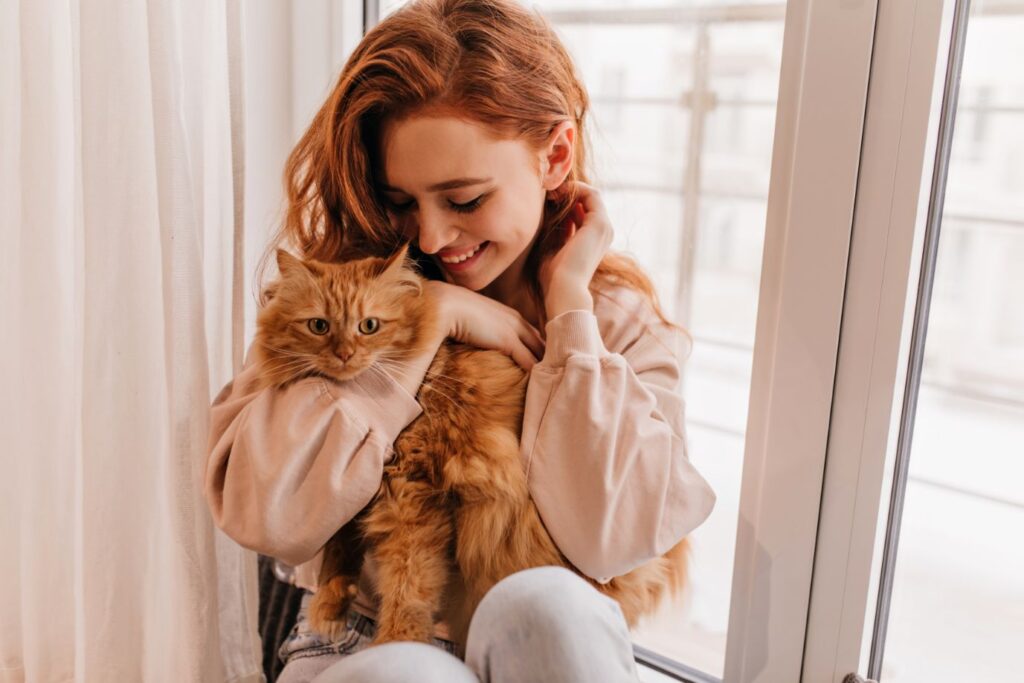 41. What is a cat’s way of keeping law and order? Claw Enforcement.

43. What is a cat’s favorite Mexican dish? Purr-ito.

44. What is a cat’s favorite movie? The Sound of Mew-sic.

45. What is worse than when it’s raining cats and dogs? Hailing taxis.

46. What made the cat upgrade his phone? He wanted to finally get pawtrait mode.

47. What normally happens when kitties go on a first date? They hiss.

48. What self-help book should a cat read to be the favorite of her owner? How to be a Good Mousekeeper.

49. What should be the best title for a painting of a cat? A paw-trait.

50. What should you say to your cat when you leave the house? Have a mice day!

51. What state has a lot of cats and dogs? Petsylvania!

52. What type of cat works for the Red Cross? A first aid cat!

53. What would a cat tell the other if they see someone misbehaving with cats? You ask them to a-paw-logize.

54. What’s it called when all the cat treats are gone? A cat-astrophe.

56. When a cat doesn’t want to say goodbye, what do they say instead? See ya litter!

57. When cats need to go to the airport, who do they call? A tabby.

58. Where does a cat go when it loses its tail? The re-tail store!

59. Which sports car does a cat love to drive? Definitely a Fur-rari.

60. Why are cats better than babies? Because you only have to change a litter box once a day. 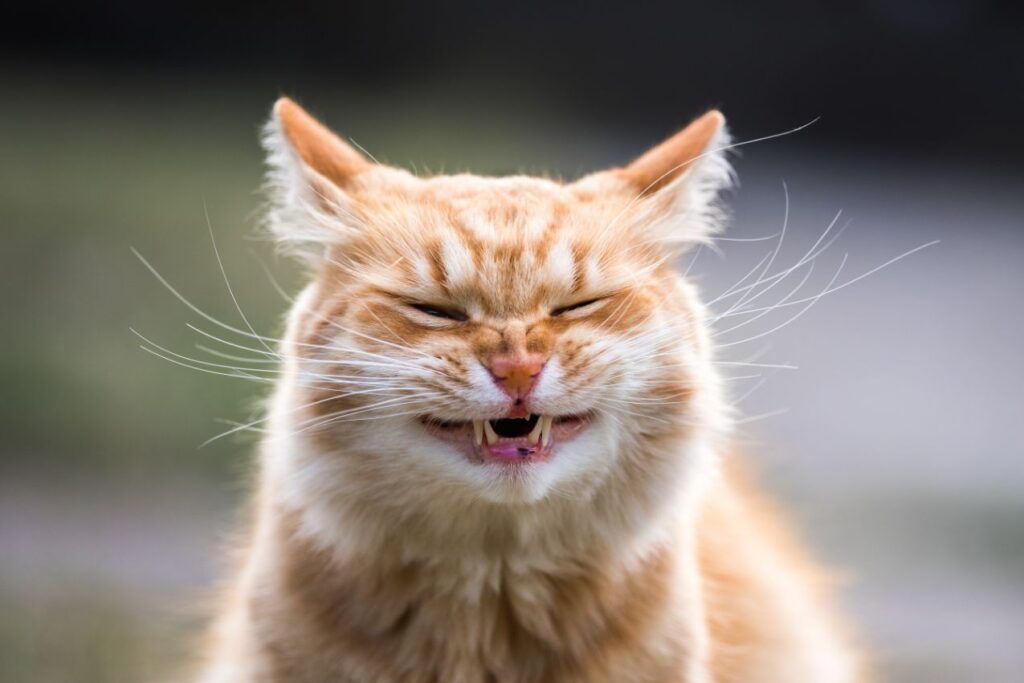 61. Why are kittens actually excellent bosses? They have great littership.

62. Why can’t you watch a movie with a cat? He can’t stop pushing the paws button.

63. Why can’t a group of cats get together to play cards? They’re scared of the too many cheetahs around.

64. Why could the cat not read what I had written for him? He was il-litter-ate.

65. Why did her my best friend’s cat not react when she saw me? She probably thought I looked fur-miliar.

66. Why did the cat get mad when you didn’t laugh at his joke? He took it purr-sonally.

67. Why did the cat have to go to an accountant? They got caught up in a purramid scheme.

68. Why did the cat wear a fancy dress? She was feline fine!

69. Why did the cats ask for a drum set? They wanted to make some mewsic!

70. Why did the gardener have cats in his garden? He wanted lawn-meowers.

71. Why did the kitty get an “A” on their English assignment? They properly used an independent claws.

72. Why did the teenage cat call her parents when she found an apartment she liked? She needed them to (cali)co-sign her lease.

73. Why did the teenage cat get sent to his room? He had a bad cat-ttitude.

75. Why do cats always get their way? They are very purr-suasive.

76. Why do cats always win video games? Because they have nine lives.

77. Why do lazy cats not get anything done on time? Because they are busy pro-cat-stinating.

78. Why was the cat so small? Because it only ate condensed milk!

79. Why was the cat using the computer for hours on end? He wanted to keep an eye on the mouse.

80. Why was the cat very nervous before the boxing match? Because he had a fur-midable contender.

You don’t need to be a cat person to fall in love with this amazing collection of feline-themed jokes.

The jokes can serve as a perfect icebreaker on your next social gathering. You can also share them on your social media handles to spread happiness around the world.