You may seldom hear the word Coydog and may have never or rarely seen this creature. Are you considering making this doggo your new family member? Adopting or not, you will be surprised to learn what exactly is a coydog. Read on to discover the truth about coydogs.

As you may have figured by its name, a coydog is a hybrid between a coyote and a dog. Isn’t that an interesting piece of news! So, yes, Coydog is a doggie, but only partly. Moreover, you may not find most of the doggie traits in this adorable fluffball.

That said, you must know that coydogs do look quite similar to dogs. Still, there are a few things that differentiate them from your domestic furry doggos. Here’s how to identify a coydog.

How to Identify a Coydog?

Coydogs, also known as Dogote, differ from dogs in appearance, temperament, and several other habits. However, you must understand that coydogs looks may vary drastically. That is because a coydog will get 50% traces of the breed of dog who has birthed this unique creature.

You can identify a coydog with the following prime features:

Apart from the physical features, these hybrids have multiple behavioral traits that can quickly help you identify them of the lot. Read on to know in detail.

What is a Coydog?

Before going ahead, let us get an insight into what is a coydog. It is primarily 50% coyote and 50% dog as a coydog is bred when a male coyote mates with a female dog. However, finding this pure breed is quite tricky. Why so?

Coyotes usually mate only once a year, between January to March. In contrast, dogs breed twice annually, later in the year. Still, you may spot some rare coydogs here and there.

These furry mates have a medium to dense coat that may range from sable to brown or white. Another fact about coydogs is that they do not grow up to be too big. Even an adult will only vary from 60 to 120 pounds in weight. However, they are known for their speed, which is around 60-70 km/h. 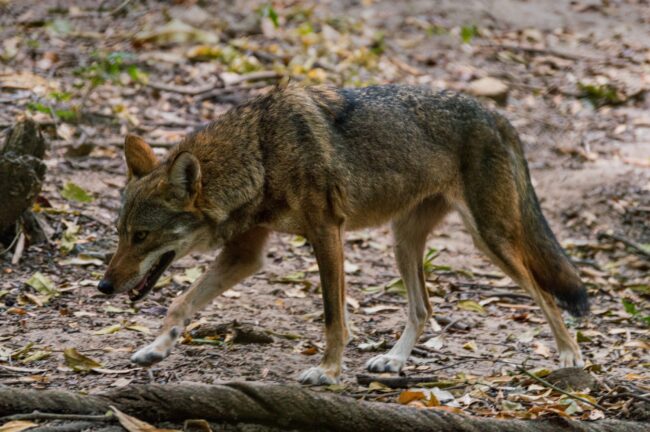 How to Identify a Coydog? All You Need To Know

Though identifying this unique breed is challenging, it is not entirely impossible. Apart from the features mentioned above in its appearance, here’s how you can identify a coydog.

Hunting: Coydogs love to hunt and explore around, so much that they may disappear and return after a few days. If you notice a four-legged mate getting game such as rabbit, squirrel, etc., it is probably a coydog.

Digging: Coydogs often drill holes and sleep in them at night. You may not really find this trait in a domestic dog.

Sound: When you hear a coydog barking or snarling, you will automatically realize that it is not a dog. Why? Coydog sounds are quite unique, as you will read in the following section.

When it comes to sounds and barks, coydogs are more like their coyote parent. If a coydog is angry or threatened, it will gape instead of snarling. Additionally, the furry mate may hiss like cats—something you will not find in most dogs (or none at all).

Related:  Submissive Urination – Should I Pee On My Dog To Show Dominance?

You may not usually hear a coydog bark because they actually howl, mostly like coyotes or wolves. However, the pitch of their howls may rise and fall and is generally shorter than that of a wolf or coyote.

Coydogs are known for making various sounds such as woof, whine, bark-howl, and more!

From pups to adults, coydogs are not the best of minglers, unless of course, you train them to be. They are not too friendly, like dogs. On the contrary, these furry beings are relatively shy and timid. Still, they expect you to give them 100% attention, or else you may not be able to bond with them.

That said, coydogs are impressively-intelligent little beings. They are relatively aggressive and wild, but once you train them, they will be your loyal mates.

So, if you plan to adopt a coydog, you must ensure to socialize the pup with other humans and pets. Also, you need to clear your status as the alpha of the pack. Otherwise, coydogs, even puppies, can be too hard to handle.

Apart from that, coydogs are mini energy balls. They love to run at lightning-fast speed and explore around. That is why you need to provide a large lawn for them and indulge in multiple activities and exercises throughout the day. Additionally, they also require a high-energy diet.

They shed only once a year, which is why you may not need to brush them too frequently. Two to three times a week should be enough.

Owing to their aggressive, wild nature, coydogs can be dangerous to pets and other animals. Especially so if they have intruders in their territory. However, these furballs are not really dangerous to humans.

Related:  Bernedoodle - Every Information About This Adorable Dog [UPDATED 2022]

That said, the temperament of a coydog will significantly depend on its dog parent and training. If you train a pup to socialize with other pets and humans, you may be successful in raising a well-mannered coydog. However, it may still get aggressive when it feels fearful.

Apart from that, your little coyote-cum-doggo will also inherit its dog parent’s behavior. So, to learn all about a coydog’s temperament, you must get an in-depth knowledge of its predecessor.

Coydogs are strong-headed, wild animals that claim their territory. They love to explore and run around, owing to their extra-fast pace and hunting nature. Additionally, they are not at all friendly, like a typical doggo. However, if you train them well, these furballs can grow-up to come out of their shell and mingle with others.

Coydogs have numerous appearance and personality traits that make them different from dogs. These include their barking, appearance, hunting, and digging habits, and more.

Are you planning to bring an adorable little coydog pup to your family? You might as well get ready to give the stubborn furball all your attention, energy-diet, and plenty of exercises. Also, do not forget to learn all about its dog-side parent to prepare yourself!