The French bulldog is a breed of dog that comes in many different colors such as chocolate, merle, blue, and lilac. We will take a specific look at the lilac French bulldog, otherwise known as Isabella.

What are Lilac French Bulldogs?

The lilac French bulldog is an expensive breed and you can expect to pay between 5000 and 15000 dollars for one. They are expensive as they need a particular method of breeding to avoid health problems.

For this reason, it’s clear why you should only buy a lilac French bulldog from a trusted breeder.

How to Look After a Lilac French Bulldog

Lilac French bulldogs have pale skin between their toes and around their eyes, and they have particular care needs. For instance, if you take your bulldog for a walk in the winter, he will need to wear protective dog wear to protect him from frostbite.

When you take your bulldog for a walk in the hot weather, you’ll need to think about protecting his skin. Lilac French bulldogs have sensitive skin that can become irritated under direct sunlight.

Another option would be to apply sunscreen on your bulldog. You will need to apply this between the toes, around the nose, to the outer parts of your bulldog’s ears, as well as any skin that you can see through his coat.

When it comes to your bulldog’s nose and paw care, you need to ensure that these stay well hydrated. You can buy a protection stick to use on your bulldog. Look for one that is rich in oils and avoids harmful chemicals. 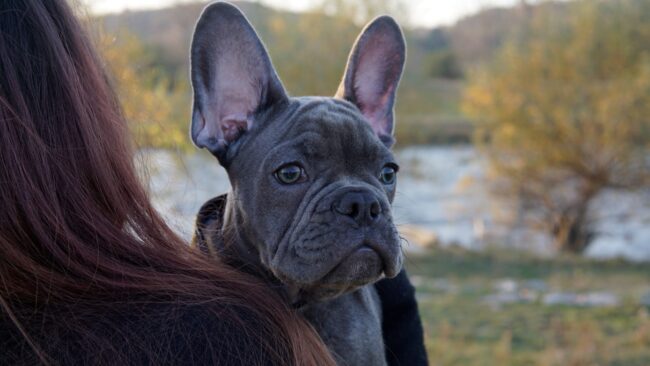 What to Feed a Lilac French Bulldog

You may already be aware of the fact that French bulldogs are susceptible to flatulence. Diet is a factor that can affect this, so you must choose an appropriate diet for your bulldog.

Unsuitable diets can cause food allergies and the symptoms related to a food allergy. It is worth speaking to a vet or your breeder about what diet best suits your bulldog.

The structure of a French bulldog’s face can make them prone to breathing and overheating problems. It is very important not to over-exercise your French bulldog.

How to Groom a Lilac French Bulldog

As you’re now aware, your French bulldog has sensitive skin so you will not need a hard brush to groom him. The best way to groom your bulldog is to use gloves that contain silicone pins. This type of glove will not scratch your bulldog’s skin.

Related:  Mini Hippo Dog - Everything You Need To Know

You need to pay special attention to your bulldog’s folds as these will need cleaned often, but bear in mind that they will be sensitive.

There’s no set rule on how often you need to bathe your bulldog. In general, you should bathe your bulldog once every two months or once a month at most. That said, if you feel like your French bulldog needs bathing then that is also fine.

Clean your French bulldog’s ears every month. Nails need to be clipped once every 4-8 weeks. When it comes to your bulldog’s eyes, remember that they are sensitive as they have wrinkles and folds. You need to keep them as clean as possible, as does the nose area. There are special facial cleaners available to buy.

The Temperament of a Lilac French Bulldog

The French bulldog is a laid-back breed but you need to make sure you socialize your pet. If you don’t, your bulldog may develop guarding behavior to those he comes into contact with. Socialize your bulldog with many different people and particularly with children.

A French bulldog also requires lots of mental stimulation as they are an intelligent breed of dog. Also, from a young age, positive reinforcement training is beneficial.

All pedigree dogs tend to have specific health issues related to their breed. This is due to their gene pool which has been purposely restricted. Unfortunately, the side effects of this are that recessive diseases are more likely to be a problem.

The good news is that you can avoid these health issues if you buy your lilac French bulldog from a breeder who’s tested the health of its parents.

– French bulldogs can be prone to hereditary cataracts, but there is a DNA check available for this.

– French bulldogs can also suffer from hip dysplasia, but, hip scoring is an option. Before French bulldogs are bred, they should have been hip tested. The breeder should provide this score to anyone wanting to buy a French bulldog puppy.

– A disease that is like hemophilia in humans is referred to as Von Willebrand’s disease can affect French bulldogs.