Are you looking towards adding another member to your family and not sure how to proceed with it? Do you already have a rottweiler and want to get another? Perhaps as a companion to your rottweiler or as just another friendly addition. Either way, it’s pertinent to decide on the sex of the dog before taking any steps, especially in the case of rottweilers.

Can Two Female Rottweilers Live Together?

Female rottweilers tend to be extremely difficult to manage when they find another one around. While it’s known that males tend to be more dangerous and aggressive when another comes into their territory, females aren’t behind.

They may initially get along if you get a puppy instead of a grown one, but that is just a ticking bomb. A bomb that’s bound to go off sooner or later as the puppy matures.

There are instances when two female rottweilers live amicably together, but they’re few and far between. It’s best to get the opposite sex when it comes to getting an addition, just to be safe.

Do Two Female Dogs Get Along?

As mentioned earlier, pairing up a female rottweiler with another may be an unwise choice. But is it the same for every breed?

While rottweilers are inherently aggressive, excitable, and tend to be exuberant in their play, they can also be dangerous. But rottweilers take up a minority of the varieties of breeds available. There are plenty of other breeds that are very well-behaved, demure, and well-managed. The smaller ones like the chihuahuas, Pomeranians, poodles, dachshunds, and Affenpinschers are prime choices.

They can be friendly and well-behaved with their same-sex friends and not show any belligerence or animosity. So, do two female dogs get along? Well, that will entirely depend upon their breed and their training, and the extent of their socialization. One must always keep multiple factors in mind before deciding upon their options. 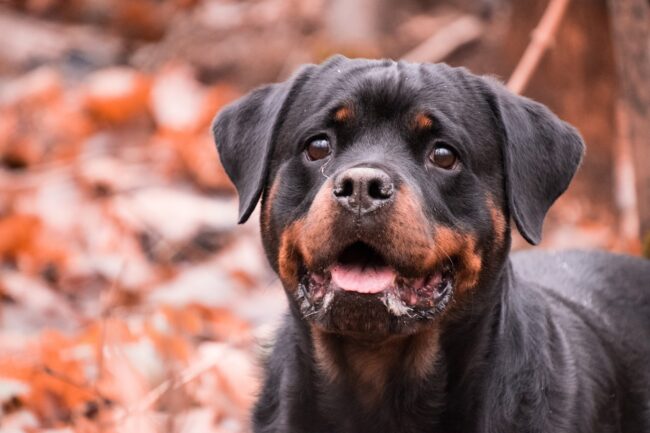 Male rottweilers tend to be extremely aggressive and violent even, as Rottweilers are also known to be a dangerous breed. Getting another one can prove to be difficult, if not a disaster.

The concerns may not be rectified even if they’re both neutered. Although that may significantly lessen their overly aggressive behavior, there may still be shows of dominance and competition for your attention. Sufficient training and socialization with both other humans and other dogs help immensely.

Without training, putting up with not one but two rottweilers will be extremely taxing. But nothing is impossible if one is determined.

Owning Two Rottweilers – What Should You Know?

If you have set your mind to owning two rottweilers, there is a list of things to keep in mind and make sure of before you proceed with the adoption. Preparing ahead not only ensures greater chances of success but also gives you an element of control in the situation. And control with two energy balls of aggression becomes an extremely necessary notion.

So, for owning two rottweilers – What should you know?

Firstly, behavior management, along with exercise and patience, is immensely needed. Not only this, but proper training is the most important step towards ensuring everyone – including your furry friends’ happiness and satisfaction.

Employing behavior management tools to train your dog is an indispensable step. Use tools like tethers, harnesses, baby gates, etc. You can use methods of desensitization and positive-association to direct their behaviors to your liking.

This is a very important step and should not be skipped, especially if you would like your dogs to get along and be happy.

Training is another crucial step that absolutely should not be skipped. A lot of aggression dogs often express due to bad or negligent training and not due to their inherent behavior. In which case, their aggression and unseemly behaviors can often be controlled with proper training.

You must take your time with this step and ensure its success. The training will make sure your Rottweiler isn’t threatened by any object or person around you. In which case, they would start barking, snarling, and in extreme cases, even biting.

Socializing the dog with other people and other dogs is an extremely important part of it.

Without exposure to other people and the environment, your furry friend may get isolated, which can lead to them behaving aggressively because of the lack of socialization. So, make sure to walk around and make plenty of friends- furry or otherwise.

This perhaps is more for your benefit than your dog’s but staying calm and patient throughout the process is fundamental. It is paramount towards ensuring the success of your training as well.

Remember, dogs are individuals and come in all temperaments, just like us. So it becomes crucial to deal with them with kindness and compassion, and most of all, patience.

Allow Your Dogs To Be Dogs

While you are training them to behave, don’t take it too far and limit their freedom. Not every squabble needs your attention.

Part of owning such a friendly and loyal companion is, after all, experiencing their personalities in full.

This goes without saying, as the more you work them out with exercise and play, the less chance of them being aggressive. A tired dog is a happy one.

It is always good to get another friend if your dog is lonely. Though opposite-sex pairings are preferred, getting the same-sex rottweiler is still not impossible, as long both your furry friends are happy and get along.