Ferrets are some of the best pets you can ever bring home. Not only are they adorably cute, these animals also have a boisterous personality that’s sure to liven up any home.

But as you may already know, there are several questions to settle before adopting a ferret. You’d want to know how this pet scores across various aspects, including kid-friendliness, ease of maintenance, and dietary requirements.

In this article, we narrow down our attention to what ferrets eat. Read on as we uncover what a ferret’s diet constitutes.

What Feeding Group Do Ferrets Belong In?

Pets fall into three primary feeding groups. They include carnivores, herbivores, and omnivores.

Carnivores are pets that live on meat. Carnivorous pets may also consume other animal-derived food products like milk and bones.

Herbivores thrive on plant-based foods. These range from plant leaves to bark, twigs, roots/tubers, flowers, and even seeds.

Lastly, omnivores are pets that live on animal- and/or plant-based products.

As a true carnivore, a ferret’s ideal diet shouldn’t contain more than 4% fiber. And much less if the fiber comes from plant-based food products like fruits and vegetables.

Related:  50 Awesome Bunny Name Ideas for Your Next Furry Friend

What Sort Of Prey Do Ferrets Eat?

Since ferrets are obligate carnivores, they can consume just about any prey they can lay their claws on. Obviously, these pets will prefer smaller and/or weaker prey than themselves.

Examples of animals that ferrets commonly prey upon include;

Ferrets also have a taste for eggs. And when their natural prey is in short supply, these animals will not mind gorging on carrion.

Although they’re true carnivores and have plenty of prey at their disposal, ferrets are notoriously picky eaters. A ferret may prefer certain types of food and be averse to others. That’s regardless of whether both food types are animal-derived products.

Food preference is more common among domesticated ferrets than their wild counterparts.

Therefore, it’s important to understand a ferret’s likes and dislikes before bringing him home. This shouldn’t be a problem if the animal was born as part of the family litter. But if you’re adopting a ferret from a breeding facility or rescue shelter, you’d do well to learn more about his dietary preferences.

How Often Do Ferrets Need To Eat? 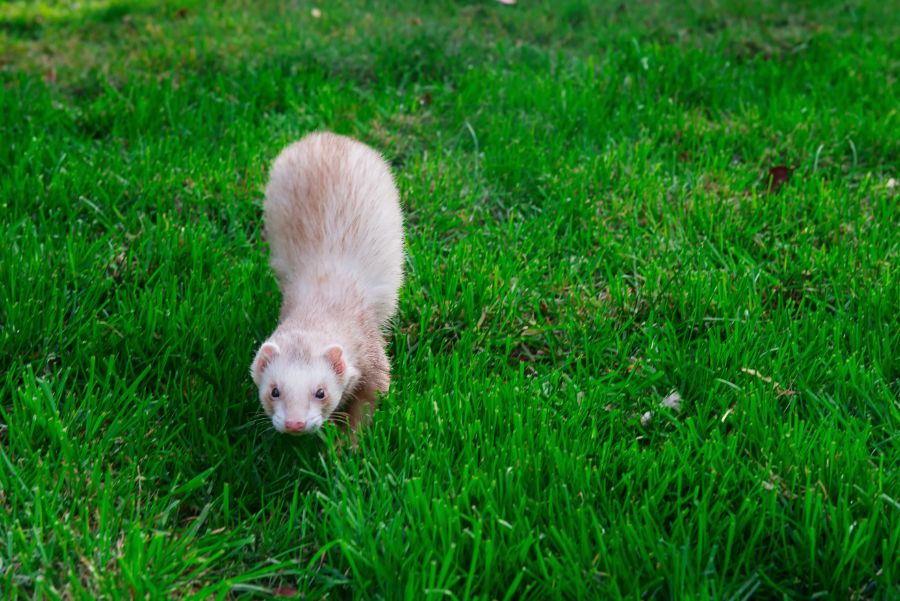 Related:  How to Keep the Water in Your Bird Bath Clean and Sparkling

Ferrets will need to empty their bowels anywhere from three to four hours after eating. Therefore, these pets typically need to feed once every four hours.

A ferret’s feeding frequency should increase considerably as the animal ages. That’s because many ferrets develop pancreatitis in old age. Pancreatitis is a medical term for the inflammation of the pancreas. The condition usually leads to an overproduction of insulin, a phenomenon associated with low blood sugar levels (hypoglycemia). Note that hypoglycemia symptoms tend to be more severe if an animal goes without food. That explains why animals more prone to low blood sugar, such as senior ferrets, deserve to eat a little more frequently than their healthier counterparts.

In the same breath, it’s important to ensure that your ferret doesn’t overeat even in your quest to feed him regularly. Overeating is a major risk factor for obesity and other chronic conditions like arthritis and diabetes.

Dry Versus Wet Food: Which Is Better For My Ferret?

There are pros and cons to giving a ferret dry or wet food.

Dry food tends to last longer and is also easier to administer than wet food. However, giving your ferret too much dry food could lead to dehydration. That’s especially if the animal also happens to be a picky drinker. Besides, dry foods can take a toll on your ferret’s teeth in addition to presenting choking hazards.

Wet foods are preferred for their ability to support hydration. These foods also have better flavor-carrying properties. On the flip side, wet foods tend to have a lower shelf-life and a higher risk of contamination that dry food.

Related:  Groundhog on the Menu - These Predators Will Order Some Woodchuck

Perhaps the key takeaway here is the importance of always feeding your ferret high-quality commercial pet food. Be sure to balance between dry and wet foods, as both are critical to a ferret’s diet.

It’s also important to note that the choice between dry and wet food for your ferret depends on factors like age and overall health condition. Younger ferrets will do better with more wet than dry food, while the converse is true for mature ferrets. Similarly, a ferret with oral pain or constipation would prefer wet to dry food. 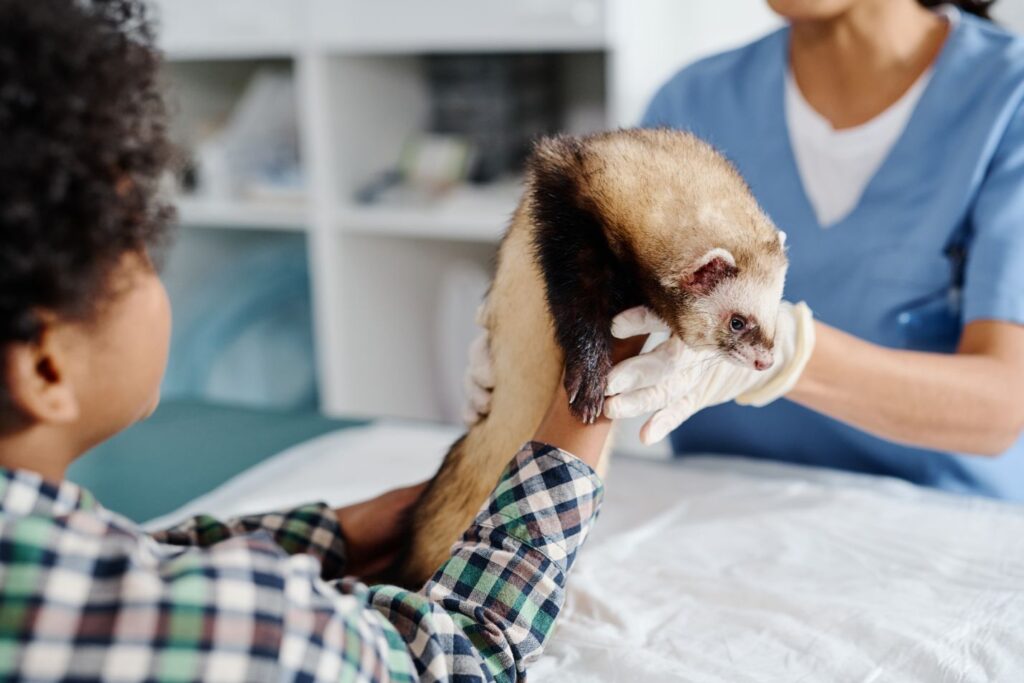 Like any pet, a ferret enjoys all manner of treats. These range from sweets to dairy products, raisins, fruits, and veggies.

However, vets strongly advise against feeding your ferret any foods that are not part of his natural diet. Doing so could produce several medical issues like vomiting, diarrhea, unintentional weight gain, and unhealthy blood sugar levels.

Ferrets are obligate carnivores whose diet should consist primarily of animal protein. A ferret’s diet can also include a substantial amount of healthy animal fats.

However, ferrets shouldn’t eat fruits, vegetables, and other plant-based foods.