Many people, all around the globe, have a flair for adventure. They constantly want to try new things and gain new experiences. From trying the deadliest rides to eating the weirdest food, they attempt everything. Are you one such adventurer?

In case you are, you might have wondered what a bear tastes like? Bears are terrifying to look at and even scarier to approach. The thought of consuming one seems thrilling to many. They are wild creatures to suit your wild spirit.

It’s natural to be conscious of what you put into your body and what it would taste like. After all, no rational person wants to consume something revolting. Bears live in the wild and if you are thinking of consuming one, doing some research is understandable.

We are here to provide you with answers and a detailed description of what a bear tastes like. Read on to find out.

What Is Bear Meat?

It is categorized as red meat because it is much darker than white meat. Earlier, bear meat was considered venison, but now the definition of venison has been modified to only include the meat of antelope, deer, and elk.

In the middle ages, the thighs and paws of a bear were considered the best parts. Bear meat was common in North America. However, in recent times, there are many controversies surrounding bear meat. Many folks think that it is inedible and unsafe.

Bear meat is consumed by many people around the world, and it is safe for you to eat. Following are some merits and demerits of eating bear meat.

How Can You Cook Bear Meat?

Bears have a thick hide, and we advise that you remove them as soon as possible. If you let it stay, the hide will ruin the meat. In addition to this, remove as much of the fat as you can on the field. This fat may be used to make different delicacies. All sorts of recipes are available online.

Since bears are strong predators, their muscles are tighter. We suggest that you prepare slow-cooked meals so that the muscle fibers efficiently break down, and the meat gives an enhanced flavor. Chilis, shredded bears, tamales, tacos, and burgers are great options and will make you crave bear meat.

The backstraps offer great steaks, and the rest is fabulous for a roast. When you are packaging the meat for the freezer, make sure you remove air from the plastic wrap. When you are handling bear meat, it is essential to properly cook it, or else there are chances of acquiring trichinosis. 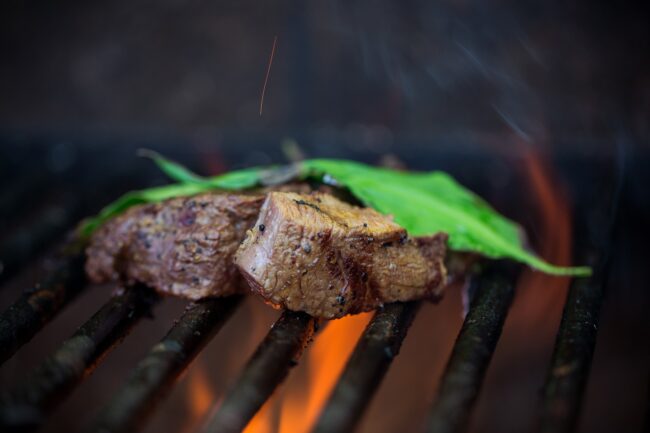 Well, you have probably heard that a bear tastes like whatever it eats. This is completely true. They tend to taste like their last meal, which is good news if they ate berries. However, if your lovely bear had eaten fish for its last meal, you are in for a real adventure.

There are different bases for classifying bear taste. Younger bears tend to taste milder than older ones, and they are also a lot of tenders. Bears that are fresh out of hibernation are usually tender since they have not worked throughout the summers, unlike fall bears.

Commonly, bears containing more fat provide harder and coarser meat. So, we advise that you go for spring bears. They feed on young vegetation for six months after hibernation ends. As a result, they have almost no fat. During the fall, bears have layers and layers of fat, and hence their meat is coarse. Fat should always be avoided when cooking bear meat.

As compared to beef, bear meat tastes stronger and has more flavor. In comparison with venison, it is much sweeter.

Yes, it is legal in the US. However, there are various restrictions on the kind of bears you can hunt in different states. You should read up on the rules before you go hunting.

Q2) Why is hunting legal in the US?

The bear population was expanding, and bears were frequently attacking nearby places. It had become unsafe for people. Since there are fewer natural predators to kill bears, their population has expanded beyond a safe limit. To secure the lives of people living nearby, the government made hunting legal.

Grizzly bears are protected because they are a threatened species, and hunting them has been declared illegal. There are fewer than 1500 grizzlies left in the lower 48 states of the US.

Bear meat has many contrasting opinions surrounding it. We can not tell if you will acquire a taste for bears or not. However, it’s an exhilarating experience. Mostly, people tend to love the flavor of bears. It is more in fashion because of the wildness of the whole experience. Ensure that you cook the meat the right way and you are good to go!