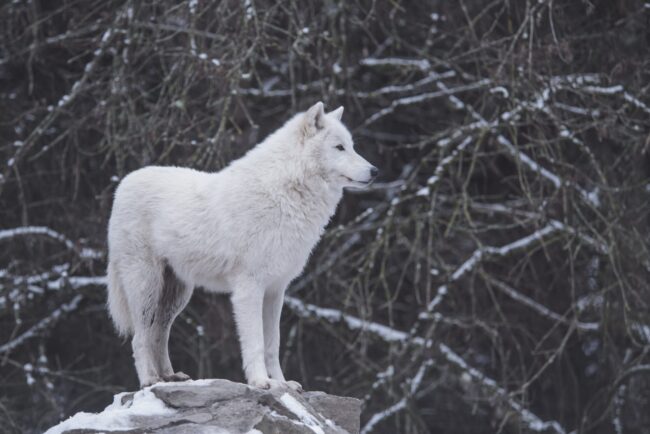 Can a wolf be defeated? Have you ever thought about a wolf being defeated? I never have, honestly. A wolf is always seen as a powerful and majestic animal. It also ranks on top of the food chain as an apex predator.

Is it really true that wolves can never be defeated? After watching Game of Thrones, I have never wanted a wolf to lose, but that cannot happen every time. So, the answer would be a big no. Wolves are animals too, and they are a part of the ecosystem.

In a food chain, a wolf is an apex predator. It is something that ranks on top of the food chain. That does not make them the only animals there. A lot of wild predators have to co-exist there, in the same place.

However, wolves are not natural prey for other predators, so they are hunted less. Wolves are also not tracked on purpose. They usually get into a fight with other animals. The animal might be another wolf or something else. If a wolf gets killed or injured badly in the battle, the enemies prey on them.

Yes, they do eat. I would rather lose my life to pet a wolf than to eat one, but that is not the case with everyone. The human body accepts all kinds of meat, including human flesh. Sounds scary, right?

Humans are on top of all food chains. Even if other animals are referred to as apex predators, humans being the first predators, can eat every mammal.

Humans can hunt down wolves, not with bare hands but with the essential weapons. There are some cases when humans outnumber wolves. That is not an assurance for humans to take over a wolf, but there still is a possibility for humans to win.

Since the wolf is a carnivore, it has the canines and claws to defeat other wilds. Humans cannot match this with bare hands.

The eating habits of humans differ significantly. According to the climate they live in, humans have framed their eating habits. When it comes to meat-eating, humans prefer the nearest and abundant species.

In snowy regions, wolves were hunted by nomads for food. However, they were not faced with bare hands.

Now the habit of hunting wolves has been reduced vastly, yet it has not disappeared. People in the arctic regions still hunt wolves as a sport. The practice of hunting for food is almost gone by now except for tribal areas.

Nowadays, wolves are mostly hunted for their fur. Wolf fur is more of a luxury than a necessity. Yes, I hear you crying for those dead wolves. I am too.

What Eats A Wolf?

There are a few animals that often get into a fight with wolves and eat them. They include,

Bears are cute only on television shows. Before you ask, no bears do not eat wolves on purpose. No carnivore attacks another carnivore on the drive.

There is no particular type of bear to get into a fight with a wolf. Grizzlies, polar, and black bears often cross paths with wolves. This is because of the close living conditions.

The main reason for bears to wrestle with wolves is territory issues. Bears are enormous animals with massive strength. They are also very protective of their babies. This becomes another reason for them to fight.

Technically both of them are not natural enemies. So, a dead wolf is less likely to be eaten by a bear. Only in some extreme cases bears to finish off a whole wolf.

Bears have sharp claws and carry around colossal weight. Wolves are quick and move in numbers. However, there is no reason for a wolf pack to attack a bear unless it becomes a threat to the group.

Since bears’ food habits are entirely different from that of wolves, they are less likely to fight for food.

Yes, you heard me right. It is a tiger that comes next. The enemy of the giant dog is a huge cat. Weren’t they both meant to be friends? Obviously, no. Okay, at least, not in the jungle.

There is no hierarchy when it comes to attacking wolves. You can even place the tigers first on this list.

Both tigers and wolves move in packs, so they have high chances to get into a clan war. That doesn’t usually happen. Since both have clear boundaries of their territories, they are less likely to get into any clash. Whenever a violation of rules takes place, there occurs a fight.

Another reason for tigers to attack wolves is that they both hunt for the same prey. When this happens, there are low chances for a wolf to attack because tigers are much stronger than wolves.

There is also an interesting theory that with the extinction of tigers, wolves start to multiply. This is not a verified one, but still, there are times when tigers directly aim for a wolf.

These animals are cleaners, basically. Bears and tigers do not finish up an entire wolf. They leave after they are done. In fact, they taste a bit of the meat to prove their victory and leave.

These scavengers include hyenas and vultures. They are the ones that finish up the meal left by these predators.

Whatever may be the reason for the death of the wolf, scavengers prey on it.

Hyenas and vultures do not directly attack wolves. If they do, it might turn out negatively on them. Even if hyenas move in packs, they do not involve in such risky activities.

Apart from all these, during pack fights, wolves eat other wolves. Don’t be scared. This does not happen often.

All the other animals fight with each other only when they have a specific reason to, unlike humans. Killing an animal for personal defense is different from killing it for fun. We, humans, hunt for no reason.

It is sad to know our favorite animals being hurt. You can also lookup the internet for more exciting wolf facts.