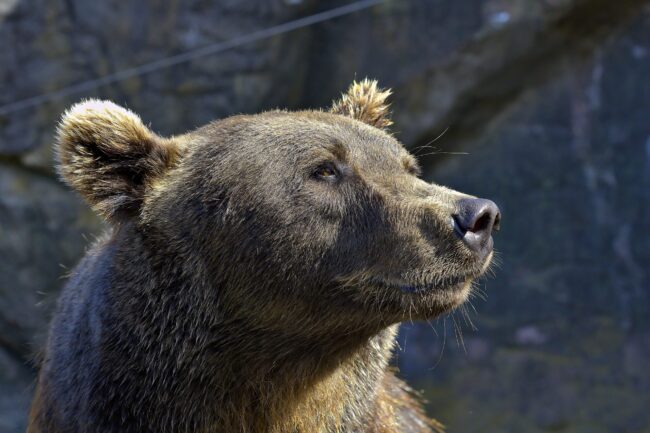 You must have seen Winnie the Pooh how he loves to eat honey all the time. From there, you can see how Pooh’s whole life depends on honey. But here the real question comes, why do bears like honey?

Many experts believe that bears are sweet-tooth, and it’s natural for them to eat honey. Therefore, bears prefer honey over any other type of food. Bears require a specific amount of honey to survive and stay healthy.

Do Bears like honey for its delicious taste or because of its nutritional benefits? Let’s find out in this article.

Why Do Bears Eat Honey?

Depending on the alternatives, bears prefer to eat honey. Honey is comprised of sugar, which includes the composition of the following sugars:

Being nutritious, the sugars break down rapidly by the body and makes it easier to digest.

Bears eat the honey, but along with that, they eat bees, who are the producers of honey. When a bear gets hold of a beehive, the wild animal will eat everything from larvae to bees to honey. Brown and black bears are the common species of a bear known for eating honey.

You might find many sweet treats that are toxic in nature and, thereby, harmful for animals if ingested accidentally. But the good news is that honey is not toxic.

Honey is made full of sugar and is sweet in taste, as mentioned above. No wonder bears like honey.

Yes, bears do get stung by the bees, but they endure everything to get the taste of eggs, larvae, and pupae in the hive’s brood comb. Some protective adult bees sting the ears and face of the bear, but they find it difficult to penetrate through the fur on the bear’s body.

Sometimes, bear accidentally take bees inside the mouth, where bees mostly sting. But, bears don’t pay attention as they are busy enjoying their favorite meal.

However, one thing to note is that bears could have reactions to bee stings as we humans do. But their allergic reactions can be dangerous and lethal.

How Beekeepers Protect Beehives From Bears

By now, you must have understood that why bears like honey. But, their love for honey might pose a threat to beekeepers situated in places with a high population of the bear. All the hard work of keeping beehive safe from bears go waste when bears find the hive and eat it out.

Due to many incidents like these, many beekeepers begin using electric fences around the beehives.

Also, as bears have a strong sense of smell, they can smell honey from 20 miles away. Beekeepers have started keeping beehives in places where bears cannot reach. Bear usually roam around woods with high bushes so that they remain covered, so beekeepers will place the beehive in an open area to prevent the bears from eating the honey.

Do All Species Of Bear Like To Eat Honey?

Most species of bear claim to eat honey but brown and black bears love honey the most. In fact, they love it so immensely that they can even break into the farms.

Due to the climatic conditions, not all bears can have access to beehives. For example, Polar bear and Grizzly bear.

Polar bears live in subarctic climates where the weather conditions make it hard for honey bees to survive. Nonetheless, there are bees found in the subarctic climate, but they do not produce honey or live in a hive.

Then, what do polar bears eat? The diet of polar bears generally consists of fat and meat from seals and other marine mammals.

Grizzly bears are found in Alaska or western Canada along lakes, rivers, and streams in the subarctic climate. As there is no honey, the diet of a grizzly bear is made up of plants, berries, meat, fish, and insects.

Other Foods That Bears Eat Apart From Honey

If you believe that bears only survive on honey by watching Winnie the Pooh, then this is not the whole truth. Bears require proteins in their diet, and they do eat other food items. For example, bears will eat small insects, roots, grasses, and berries.

Another thing to note is that bears can adapt to different environments and their requirements change accordingly. Grizzly bears can also eat fish and rodents.

No, animals perceive and sense taste differently. For some animals, what bears find sweet, they do not. However, you will find certain animals that are natural predators of honey, just like bears.

As the name already suggests, honey badgers are known for their love for honey. Just like bears, they will eat everything from the beehive they can find.

One interesting thing about honey badgers is their mutual relationship with forest birds. The birds are known as honeyguides; they guide the path to the beehives where honey badgers can enjoy and eat honey from the hive.

Experts believe that Shunks is the first honey predators known in the world. They prefer to eat honey from the beehives. In any given circumstance, they will eat honey after taking it out from the hive.

Opossums are marsupials found in North America. They prefer to feed on honeybees rather than honey but end up eating everything from the hive, including honey.

So, the key takeaway is that bears love to eat sweets, and honey can only satisfy their craving for sweets. It’s the alluring taste of honey that makes them do everything they can to have their fill.

It’s not just honey, but the larvae, bees, and eggs that come with the hive drive them. This is where they can get their full portion of proteins in their diet. From this, we can agree that bears love honey due to its nutritious and non-toxic value.