The crow of a rooster is a universally known sound that might be the most favorite to imitate as a child. If there’s a rooster in your area, most definitely, you already know of its existence. You’re here reading this article that suggests either you’re a curious being or this loud and proud bird has hampered your night’s sleep.

Is a rooster crowing in the middle of the night keeping you awake? Then you might want to carefully observe his environment and understand the reasons behind it. Here’s why they crow, especially at night!

Why Do Roosters Crow At Night?

Roosters usually crow and screech pretty much throughout the day. It was only recently that scientists decided to figure out the reasons behind these loud vocalizations. It was found out that there are two possible causes for this – the internal biological clock and the external stimuli.

Scientists Takashi Yoshimura and Tsuyoshi Shimmura published a paper in 2013. They found out that a rooster actually follows an internal circadian clock. This clock spans 23.8 hours, and a rooster would start to crow at the appointed time.

This is understood as a major reason why you hear a Cock-a-doodle-do slightly before the sunrise. 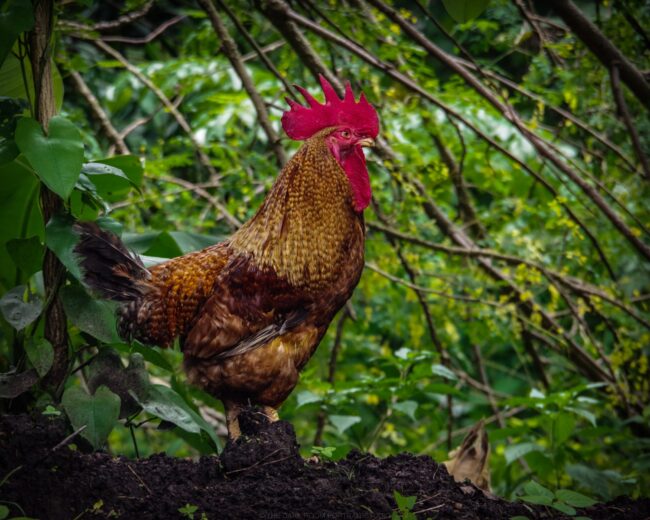 What could be the crucial reasons?

The external environment also points to some big reasons. Keep reading to find out more!

Rooster’s ancestry goes back to Far Eastern countries of Myanmar, Thailand, India, and China. They used to live in dense jungles where crowing could be used as an announcement of his residence.

This loud voice is to mark his territory and hens. Crowing would also give information about other flocks and whether they’re coming near your territory or going away. Chickens possess an excellent sense of hearing, and hence crowing could signal the presence of the rival flock.

Roosters are sexually potent in the morning and early evening. Some of them crow after mating while others after their hen have laid an egg.

In a flock, if and when they start crowing, there’s no end until all of the rooster’s crow. The head rooster is always the last to follow, indicating a personality trait.

There are various theories as to why roosters crow at night. While a rooster’s crow first thing in the morning is nothing new, they actually start crowing about two hours before the sunrise.

Even before clocks were invented, it was a rooster’s crow that would wake their owners right when it’s dawn. The sky begins to light up first before the actual sunrise. This means if sunrise is bound at 6 am, you’ll hear your rooster at 4 o’clock in the morning! This phenomenon is called anticipatory predawn crowing. This gives an impression of them crowing at night.

Researchers at the Nagoya University in Japan found out that these male birds don’t need external light stimuli to know when to start crowing. Their internal circadian clock spans 23.8 hours. This means that their day starts a little earlier than ours.

This light-sensitive bird may mistake any bright light for dawn.  Artificial sources of light such as a vehicle’s headlight and strong beam of light coming from surroundings disturb them. They find these surroundings unusual and start crowing. So, if there is a streetlight in their peripheral vision, then your rooster may as well crow all night.

One can try covering up the chicken coop to avoid any unnecessary interference of lights. Switching off all the lights can help to ensure your roosters don’t start crowing hours before the sunrise.

It is the nature of roosters to protect their hens. Predators or perceived predators at night, like surrounding dogs or roosters from another flock, can ring their alarms. Crowing, in this case, serves the purpose of warning the predator. This is to say that they are aware and present to save their hens. They start crowing to avert any danger. This helps the hens to immediately seek cover from the predator.

Sometimes a vehicle at night can cause this trigger, and they start crowing. This is due to their innate nature of marking the territory and issuing a warning that any potential rival should stay away from their area. In this case, a vehicle is not clearly visible in the dark, thus indicating a threat.

And if later is the case, there is only so much you can do to prevent your rooster from crowing at night. It is impossible to break their behavioral pattern or change their personality, for that matter.

Yes, that’s right! Some rooster breeds are quieter than the others.  Silkie and Faverolles roosters are considered the tamest. Barred Rocks, Orpingtons, Cochins, and Brahmas, are also calm breeds.

At the same time, Rhode Island Red roosters hold the reputation of being aggressive. But as mentioned above, their personality also varies depending on the environment. This means you can not ensure a quiet night just based on the breed of a rooster.

Measures To Stop Roosters From Crowing

If your rooster is encountering threats or potential dangers, then it is a good idea to secure its location. It is equally important to observe the rooster’s nighttime habits.

By making sure that they have all their needs in place, you can control their nighttime stimuli. Reducing the size of the flock also helps in cutting down potential problems.

In conclusion, a rooster’s crow at night should not come as a surprise. And as the varied reasons above suggest, an owner can only try his best to control their nighttime crowing. It is the proud and loud rooster who decides whether to crow at 3 o’clock in the morning or not. But the aforementioned information can definitely help you dig into the cause.