Cats are not new to strange behaviors. Although these animals have lived with humans for thousands of years, we’re yet to fully figure them out.

A cat biting then licking his owner in quick succession is one of the many quirky feline behaviors whose meaning was originally shrouded in mystery. But not anymore.

This article explores all the possible reasons your cute little furball is chomping down your skin and then giving you a warm, gentle lick.

The Ironic Relationship Between a Cat’s Bite and Lick

There are numerous reports of cats biting then licking their owners in quick succession. It’s easy to dismiss such reports as utterly false or largely misrepresented. That’s especially if you’ve never owned a cat at all, or if you don’t seem to spend enough quality time with your feline companion.

Another reason why these reports are easy to dismiss is that in a cat’s world, biting and licking are actions that sit right at the extreme ends of the behavior spectrum.

But while the combination of biting and licking may sound off to many pet owners, this behavior could well be part of your cat’s way of communicating with you.

Reasons Why Your Cat Bites You and Then Licks You 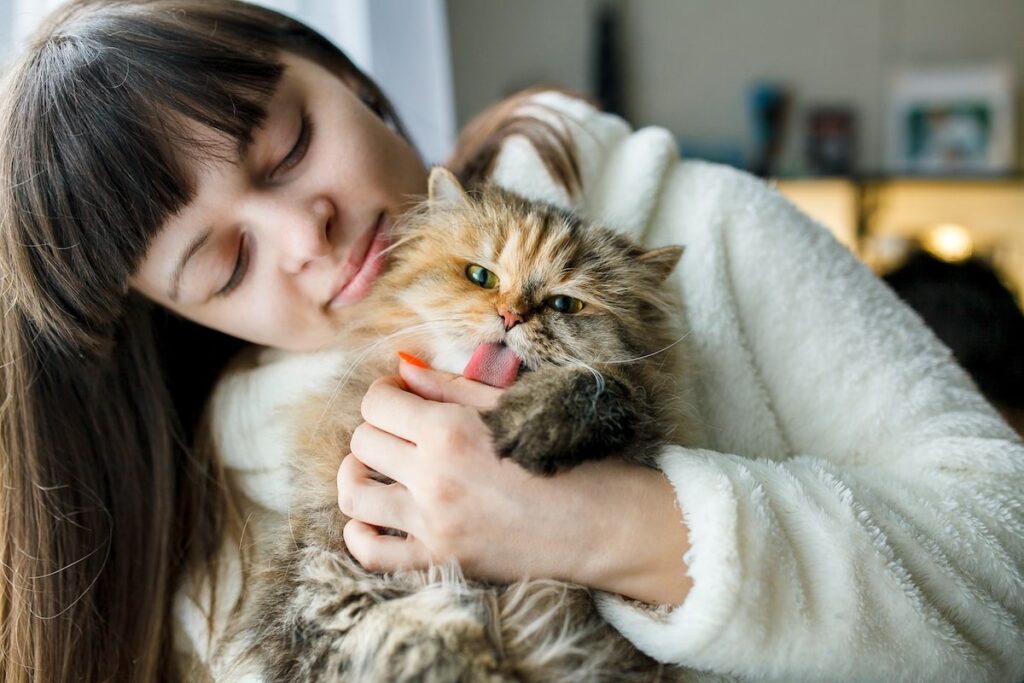 Grooming is the most possible reason why cats bite and then lick their owners in quick succession.

You don’t need to be too observant to have noticed that cats tend to bite their fur a bit during their grooming sessions. The bites are usually followed by smooth, gentle licks.

Related:  Newfiedoodle: Everything You Need To Know (2022)

Cats do not understand that our skin is more delicate than theirs. So, in their attempts to clean dirt off our bodies, they may mirror their usual grooming style which involves biting and licking.

Cats will only groom other cats that they’ve sufficiently bonded with. The same is true for cats grooming their human owners.

But not all biting and licking is an act of grooming. Sometimes, your adorable feline companion just wants to demonstrate his affection towards you.

When biting and licking is a result of affection, you’ll notice that the behavior is more intense whenever you return home from a long absence.

There are numerous ways cats lay claim to their stuff. One such method is by licking the person or object.

Biting and licking allows your cat to deposit his saliva on you. The saliva contains pheromones that the animal can identify with. Whenever you’re within close proximity to your cat, the animal will pick up his pheromones and instinctively know that one of his belongings is close by.

Obviously, this scent-marking method only works for objects and other pets. It doesn’t work for humans who’ll quickly wash off the cat’s saliva and douse their skin in strongly-scented perfumes. 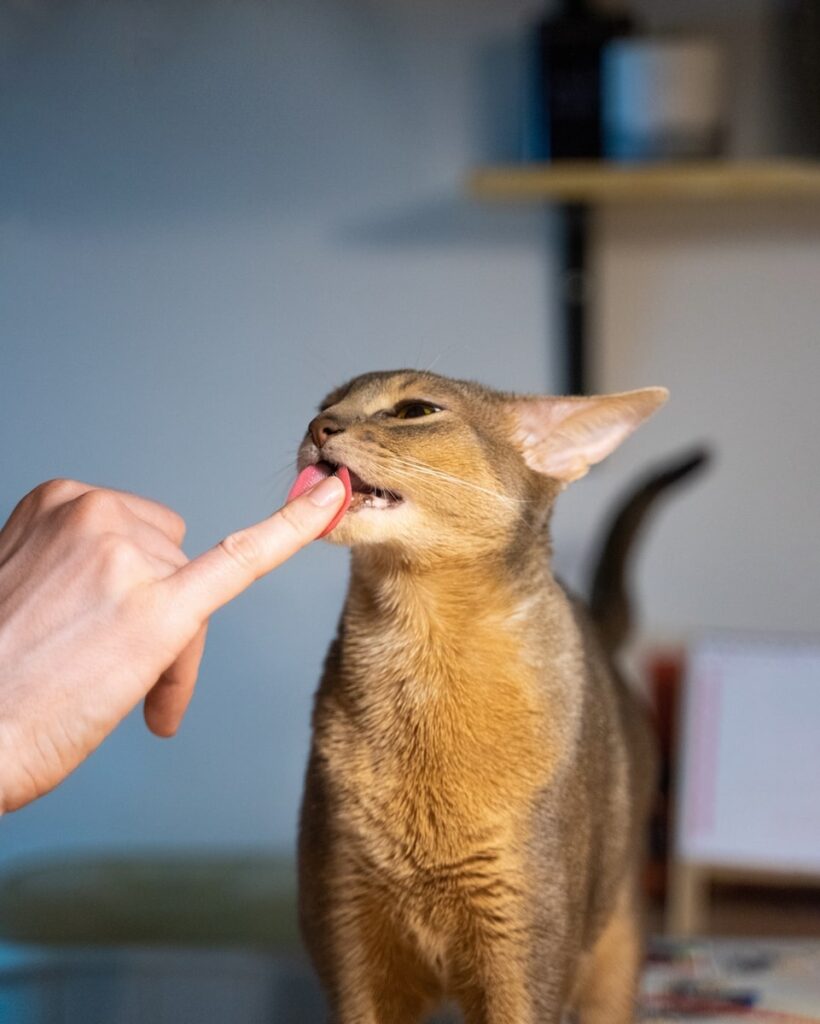 You’ve just had a hearty meal of beef or seafood. As you were relishing your food, some broth dripped on your arm or legs but you forgot to wash it off. Since meat also happens to be a cat’s favorite diet, the animal may chomp down your skin in an attempt to lick off the delectable aroma.

Sweaty skin is also likely to make a cat bite and lick his owner. That’s for the simple reason that sweat tastes like salt.

It could also happen that you’re wearing a perfume that your cat finds pleasant. In this case, the animal may bite and lick you in addition to rubbing himself on your body.

Your cat can go to any length to get your attention. That’s especially if the animal feels that you’re deliberately ignoring him.

A cat is intelligent enough to know that a quick bite followed by a warm lick is enough to have his owner give him a listening ear.

Related:  Your Quick Guide to The Blue Fawn Pitbull

During these moments, it’s important to take note of whatever your cat is trying to tell you. The behavior could indicate hunger, thirst, or a need for petting. It could also be a warning signal to greater danger like a serpent slithering through the doorway.

Cats are no stranger to play aggression. Many cats play by biting each other. Some may also bite and lick, especially if they’re trying to be gentle with their playmates.

If your cat is biting and licking your skin in quick succession, it could be a way of urging you to play with him.

Other playful signs to watch out for include swishing tail and boisterous behaviors like pouncing and running in short bursts.

It’s every cat owner’s dream to keep their feline friends happy at all times. However, overexcitement can make a cat resort to undesirable behaviors like biting and licking his owner.

Bites inflicted during moments of overstimulation can be excruciatingly painful. Therefore, it’s important to understand your cat’s temperament and know when he’s had enough stimulation.

Remember that different cats have different thresholds on how long they can be petted and the areas they’re uncomfortable being rubbed during petting sessions. 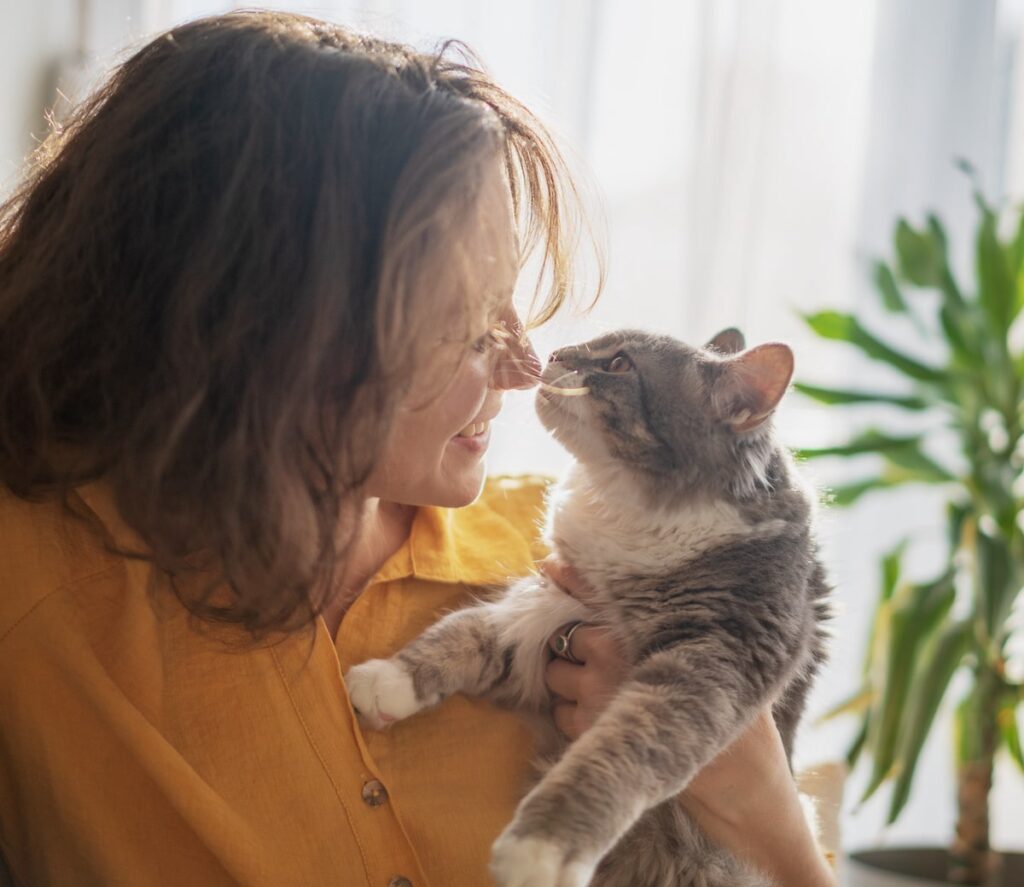 Other reasons cats bite and lick their owners include;

• A defense reaction, for instance because you twitched or flinched suddenly
• A predatory response to a cat’s natural hunting instincts
• Stress, anxiety, or boredom
• Anger or frustration
• Pain
• Health issues, such as skin lesions or skin irritation
• Tight fur knots that need de-matting
• Genetic predisposition

How to Stop Your Cat From Biting and Licking You

A cat’s lick may be rough and uncomfortable to the skin. But it’s generally harmless. It’s the bites you should be worried about.

When a cat bites you, he’ll likely deposit saliva into the open wound. Cat saliva is unhealthy for humans. The saliva could harbor numerous potentially harmful microorganisms, including the bacteria Pasteurella multocida that’s known to cause infections in humans.

Fortunately, there are several tips you can implement to stop your cat from biting and licking you.

Related:  An Owner's Guide to the Gorgeous Liver German Shepherd

First off, you should start by understanding your cat’s behavior and personality. For instance, does the animal love to play aggressively? Is he a fastidious groomer?

Next, try to establish when your cat started biting and licking you. And while at it, determine the times when this behavior is most intense. If a cat bites and licks you whenever you return home after a long absence, it could indicate excitement or separation anxiety. And if this behavior happens right after having a meal, it could be a sign that your cat is trying to clean you up. 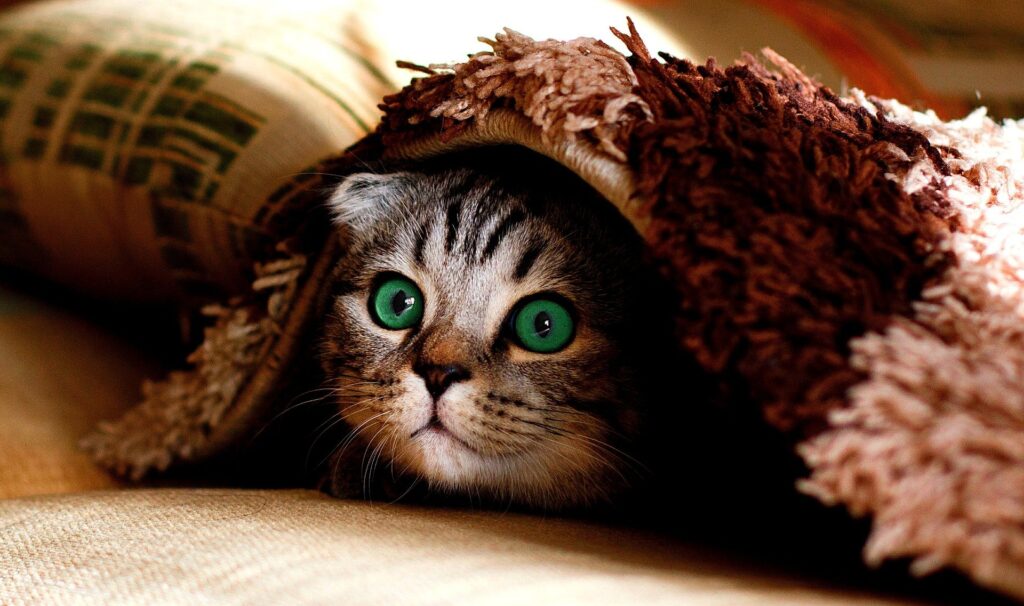 The next step is to check what else your cat does whenever he bites and licks you. If his tail is swishing, then it means he wants to play. And if he’s freezing in space while baring his teeth, that’s a clear sign of aggression.

Ultimately, the most effective solution to the problem of a cat biting and licking his owner will depend on the underlying cause. Common tips you might want to explore include;

• Exercising your cat regularly to prevent stress and boredom
• Maintaining a robust grooming and petting routine
• Changing your exercise, grooming, and petting techniques regularly
• Providing the cat with enough chew toys for maximum stimulation, especially when you’re gone
• Avoiding trigger situations
• Deterring the behavior by reacting in a manner suggesting you’re in pain
• Positive reinforcement, i.e. rewarding your cat with a treat if he’s able to hang around you without biting and licking you
• Early training and socialization

If all the above interventions fail despite your best efforts, take your cat to the vet immediately. A thorough examination may uncover hidden health issues causing your cat to bite and lick you.

Compulsive biting and licking is a normal but undesirable feline behavior that can have far-reaching health implications if allowed to continue. Fortunately, there are several ways to stop or redirect this behavior. As a parting shot, always remember to consult your vet if your cat continues to bite and lick you despite your best efforts to have him stop.