Raw foods have become all the rave, particularly for people on restrictive diets. The primary benefit of raw foods is that they boast a far higher nutritional value than their cooked counterparts.

But while you can safely incorporate raw fruits, leafy vegetables, and even tubers into your diet, we cannot say the same about many raw animal products.

Chicken is one of the numerous animal-based foods that you shouldn’t consume raw. And that probably makes it harmful to your dog too.

This article investigates the potential effects of raw chicken on dogs.

Dogs shouldn’t eat raw chicken (or any other type of raw meat for that matter).

Besides, there are risks of secondary contamination where your dog may pass the harmful bacteria in raw chicken to you and other household members. This could result in a range of foodborne diseases.

As we’ve just hinted, bacterial infections are the biggest danger of feeding raw chicken to dogs.

The most common bacteria that contaminate raw chicken are salmonella, campylobacter, and Clostridium perfringens. Ingesting any of these organisms can cause food poisoning, a condition medically known as gastroenteritis.

Gastroenteritis symptoms vary from one dog to another. However, you can expect vomiting, diarrhea, dehydration, nausea, inappetence, abdominal pain & cramping, and fever.

It’s also worth noting that the symptoms of food poisoning resulting from eating raw chicken will depend on the types of bacteria your dog has been exposed to. Salmonella is known to take effect the soonest. The first bouts of vomiting may set in in as few as two hours after exposure. Clostridium perfringens and campylobacter follow in that order, with the first set of symptoms appearing in around 24 hours and 2 days, respectively.

The following are other potential issues with raw chicken for dogs;

The harmful bacteria inhabiting raw chicken may not only be a problem for your dog. They could also cause severe secondary infections to other household members.

For instance, salmonella can continue to live in your dog’s intestines and infect the animal’s feces. It only takes patting your pooch on his rear end and accidentally licking your fingers for contamination to occur.

Raw chicken is typically cured before it’s available for sale at supermarkets and grocery stores. The curing process may involve the use of chemicals toxic to dogs. These chemicals are usually added as preservatives, seasonings, and flavorings.

Ingesting excess amounts of salt can lead to a potentially fatal disease in dogs called sodium ion poisoning. Symptoms to watch out for include increased thirst drive (often followed by frequent urination), dehydration, fatigue, and fever. There may also be gastrointestinal side effects like vomiting and diarrhea. 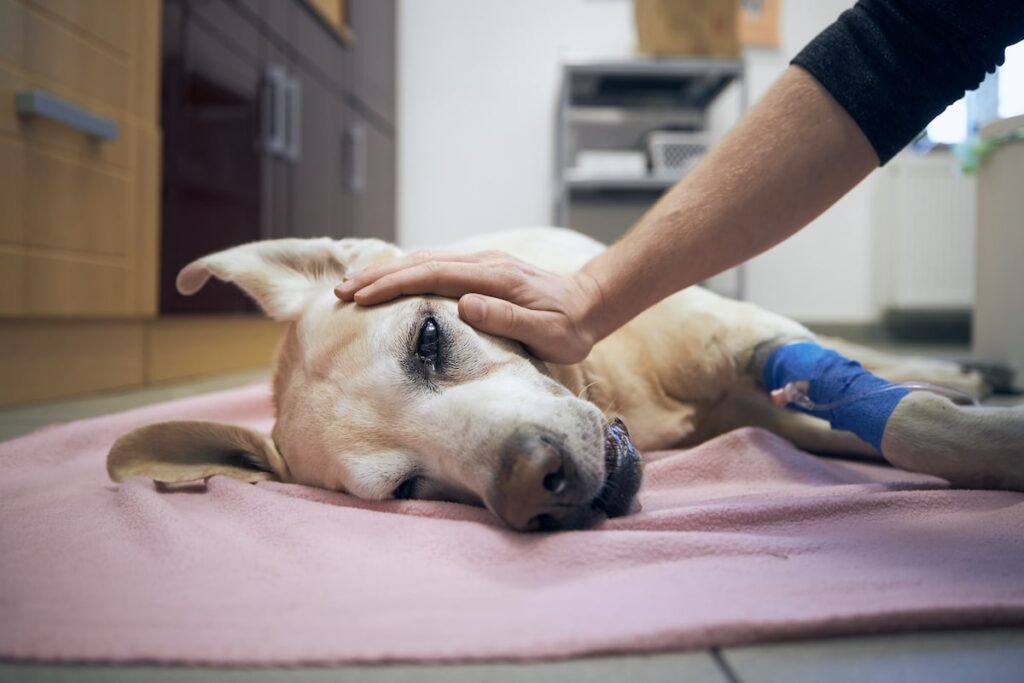 Related:  Help, My Dog Ate Aquaphor! What Can I Do?

If you suspect that your pooch could be suffering from chicken allergy, your best bet is to keep chicken off his diet. And that certainly means avoiding raw chicken at all costs.

Which Dogs Are More Prone To The Adverse Effects Of Raw Chicken?

Raw chicken is a problem for all dogs. However, factors like age and overall immunity may affect the severity of side effects.

For instance, puppies shouldn’t eat raw chicken due to their rather sensitive digestive system. The same is true for elderly dogs.

Raw chicken is also likely to trigger worse symptoms in sick dogs, pregnant dogs, and dogs recovering from a surgical operation. That’s because these dogs have rather diminished immunity.

Raw bones are generally safer for dogs than cooked bones because they’re less prone to splintering. Therefore, a dog is less likely to suffer oral injuries or intestinal bleeding resulting from chewing and swallowing splintered bones.

However, the risks of feeding raw chicken bones to dogs far outweigh the benefits. Just like raw chicken meat, raw chicken bones could harbor harmful pathogens. Swallowing these bones may still make your dog sick. Besides, there are additional risks of choking and gastrointestinal obstruction.

Simply put, all raw chicken parts are potentially harmful to dogs. That includes the meat, bones, and even the juice.

What’s The Best Way to Serve Chicken to Dogs Then? 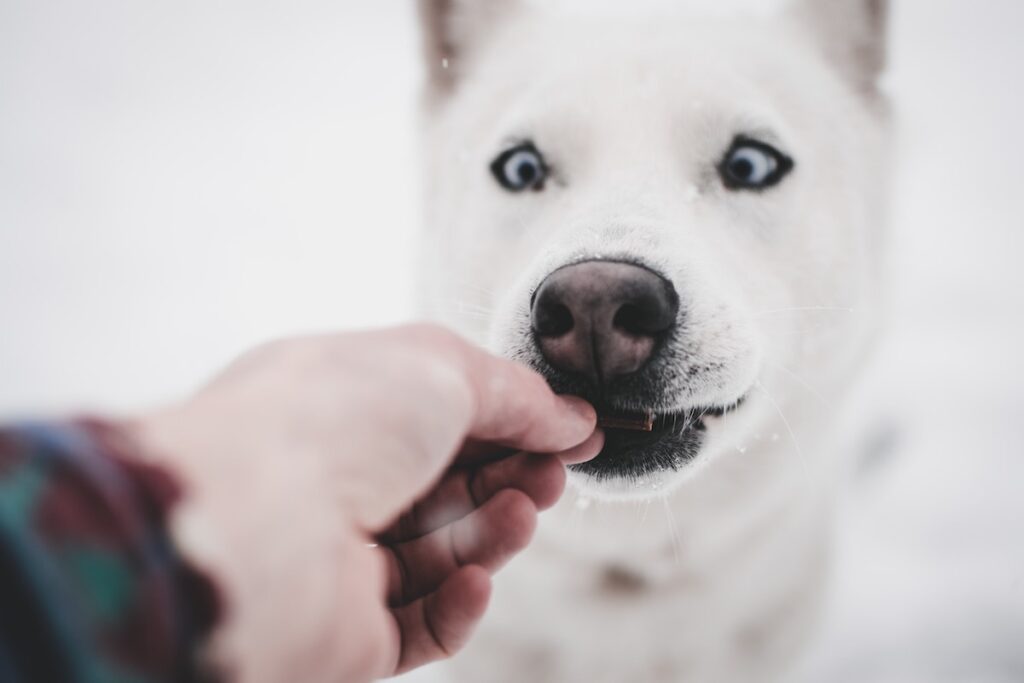 Having reviewed the potential risks of raw chicken for dogs, it therefore goes that the safest way to share chicken with your pooch is to cook the meat first. Be sure to cook the meat to a temperature of at least 165 degrees Fahrenheit, as this is the temperature at which most harmful bacteria in food die.

Related:  Is Tuna Safe For Dogs Or Is The Fish A Delicious Death Trap?

It’s also prudent to prepare chicken using cooking methods that do not require the use of fat, seasonings, and spices. Excess consumption of any of these three substances could easily cause health problems for your pooch. Therefore, the best way to cook chicken for dogs is to boil the meat in plain water without using a lot of fat, salt, or spices.

You should also consider deboning chicken before giving it to your canine friend. Remember that cooked chicken bones are highly brittle and prone to splintering. There’s the option of deboning the meat before or after preparation. Deboning chicken before cooking it reduces the risks of contamination as you won’t need to manually handle the meat after it’s cooked. On the other hand, deboning after cooking is easier as the meat will seamlessly shred off the bones.

Once the chicken is properly cooked, remove the meat from the pot and allow it to cool down. Then, shred it into bite-sized portions before feeding it to your furry friend.

Raw chicken is inherently harmful to dogs and should never be fed to them. The best way to share this delicacy with your pooch is to boil the meat in plain water without adding too much fat, condiments, or spices. Then, feed it to your dog in small portions.

If you ever discover that your dog has eaten raw chicken, monitor the animal for up to two days for any worrying symptoms, in which case you’ll need to consult your veterinarian immediately.