Apart from the standard black and white, you can find Blue, brown, and even yellow dalmatians. When we mention the different colors, we mean that the spots on the white coat vary in color. The rare Dalmatian type that we will discuss in this article is Lemon Dalmatians.

What Are Lemon Dalmatians?

Lemon Dalmatians are a result of some genetic variation within the standard black-and-white dalmatian. The color variation comes when the presence of recessive ‘e’ genes that do not allow the dalmatian to produce the black pigment.

When the dog does not have any dominant ‘e’ genes, they cannot create any dark pigmentation. This lack of pigmentation makes yellow-ish spots on the white coat of dalmatians. Most lemon dalmatians have either black or dark eye-rims and nose. However, this coloration depends on the genetic code of the specific dog.

Overview of the Yellow Dalmatian

Given below are a few things that are specific to lemon dalmatians.

Some Lemon Dalmatian to be Acquainted With

Below are the common facts associated with Lemon Dalmatians.

The difference in spot colors is due to a rare genetic mutation that occurs in dalmatians. As explained above, when dogs have the dominant ‘e’ gene, they are able to produce dark pigmentation. However, recessive ‘e’ genes restrict the dog from producing dark pigments on their coat.

Therefore, a black-spotted dalmatian would either have ‘Ee’ or ‘EE’ genes. However, when dalmatians have ‘ee’ genes, they develop yellow-colored spots on their white coats. The spots’ shades can vary between pale yellow and bright orange.

Some Lemon Dals might even be born without any spots on their white coat. However, these puppies will grow to develop at least a few yellow spots on their coats. 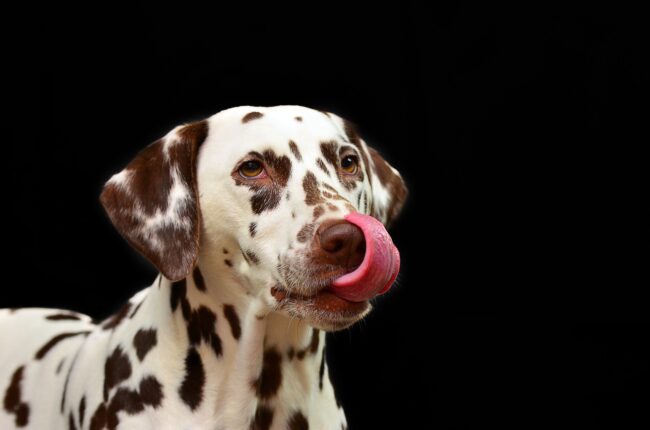 The Yellow Colored Spots Are Considered to be a Genetic Fault

While lemon dalmatians are adorable, if a breeder considers them for their value, they are supposed to have genetic faults. Therefore, you will never see a Lemon Dalmatian in a dog show. In most cases, Lemon Dalmatians will be penalized if their owners try to enroll them in a show or competition.

There are other adorable variations commonly seen in dalmatians that are considered as flaws. Some of the variations not acceptable according to the American Kennel Club are as follows.

Lemon Dalmatians are Not as Rare as You Might Think

We’re sure that most of you reading this blog might be aware of the existence of Dalmatians. However, you might be searching for Lemon Dalmatians because you recently came across this rare variety or are intrigued with their different coloration. Naturally, you might think that this variation is very rare. However, that is not the case.

Lemon Dalmatians are the most common of all the variations of Dalmatians. The rarest variation of dalmatians is Blue Dalmatians, who have ink-blue spots on their white coats. While you will never see a Lemon Dalmatian in a dog show, you might end up seeing one of the streets with their owner.

This one doesn’t come as too big a surprise. Since lemon dalmatians are just like any other dalmatian except for the recessive gene that causes the yellow pigmentation, they are also believed to have originated from Dalmatia. Since the breed comes from the Australian region of Dalmatia, they were given their name in the 18th century.

Even though the breed’s name came into being in the 18th century, the breed had many-a-times appeared in historical documentaries.

The Yellow Spots have No Effect on the Breed’s Personality

Lemon Dals are similar to the ‘normal’ or any other dalmatian variation. Since the yellow coloring is the result of a genetic mutation that only affects the spot colors. However, this mutation has absolutely no effect on the temperament of the dog.

Lemon Dalmatians share all their characteristics other than the spot-coloring on their coats. All the traits between all variations of dalmatians are the same. Therefore, Lemon Dalmatians, too, are herding dogs, firedogs, and carriage dogs.

Lemon Dalmatians, too, are incredibly intelligent, affectionate, and protective towards their humans. They are people-oriented dogs and love to get all the attention that they can. They are great to be around families that have young children or toddlers because of their protective instincts.

Dalmatians are not the breed that does well without attention. Lemon Dalmatians require as much attention as they can get, and if they don’t get it, they can get scared. However, instead of getting feeble at freight, Dalmatians can get extremely aggressive.

This is not a trait that is exclusive to Lemon Dalmatians, however. All Dalmatian variants have this issue. While these dogs are not generally aggressive, it is vital to soothe them when they are in a feisty mood since this mood is more than likely a result of fear.

Lemon Dalmatians have the same energetic qualities as the dalmatian variant recognized by the American Kennel Club. If you are willing to adopt a Lemon Dally, make sure that you can provide complete exercise to the dog. They need constant mental and physical stimulation.

When Lemon Dals do not get enough stimulation, they tend to get restless, destructive, and anxious. Therefore, they require a constant energy outlet. Two 90-minute walks in a day are essential to maintain the well-being of a Lemon Dal.

Much like normal Dalmatians, Lemon Dalmatians have short-coat too. However, lemon dalmatians require a lot more grooming as compared to other dalmatians. They tend to shed heavier during the rainy season. However, they require extensive and regular grooming thrice every week throughout the year.

The yellow-spotting on their coat comes because of the recessiveness of the genes that dictate the strength of the hair follicles. This is why they shed more than any other dalmatian variant. 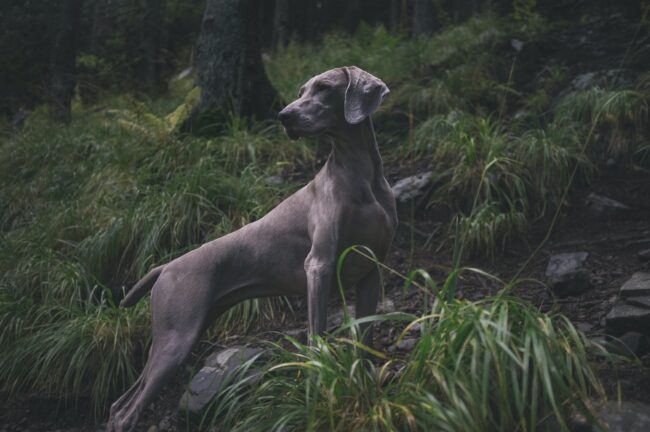 Unlike most dogs, Lemon Dals do not have enough enzymes that allow dogs to digest protein. Therefore, they need to be put on a special diet. This is important because undigested protein is the leading cause of many physical complications in dogs, such as the development of kidney stones.

It is important to note that this enzyme’s lack is not a problem that persists in only Lemon Dalmatians. All variants of Dalmatians have this issue, which is why kidney stones are one of the leading medical problems that Dalmatians seem to have.

Even though the breed has less of the protein-digestive enzymes, they require a small amount of protein in their body. Lack of proteins will deprive Lemon Dals of their natural energetic characteristics, making them sluggish and unhealthy.

Dalmatian parents need to put their pooches on a special diet that does not have a lot of proteins. Constant hydration helps the dogs process whatever protein they can possibly process. Excess water also helps the Lemon Dalmatian’s kidneys stay clean and healthy.

Your Lemon Dalmatian Might Turn Deaf in Old Age

The reason that Lemon Dallies are more prone to deafness is that the gene that is responsible for a Dalmatians’ pattern is linked with hearing. The presence of the twin ‘e’ gene makes Lemon Dalmatians susceptible to deafness in old age.

Lemon Dalmatians are an interesting variant of the ancient Dalmatian breed. They are one of the most playful, energetic, cheerful, and affectionate dogs that can exist. However, that should not come as a surprise since Lemon Dalmatians have the exact temperament as any other Dalmatians.

This blog talks about why Lemon dalmatians have the orange-yellow coloration that distinguishes them from others. We hope that you found all the information that you needed and more from this blog.