Littermate includes two names in itself. Litter and mate. The meaning must be very clear from the separation of the names only. Litter is the place the pups are born. Mate refers to them being friends. The pups being friends and together from the moment and place they were born. They are called littermate puppies. When they grow older, they become littermate dogs. However, growing up, they can develop littermate syndrome.

It is normal for people adopting puppies from a litter to adopt two instead of one. No one would want to separate the cute brothers and sisters from each other just after birth. It is also normal to think that adopting two puppies at once. It would take lesser time to train both of them. However, training two puppies take twice the time and effort required with one.

Not only work and time is the hurdles to adopt two puppies at once. In the case of littermate puppies, behavioral issues can also cross the path. This refers to littermate syndrome. The only way to recognize this is when you have two misbehaving sibling puppies in your house.

What is Littermate Syndrome?

Littermate syndrome refers to behavioral issues that are developed in sibling dogs. Two puppies from the same litter develop a very strong attachment bond with each other. That bond becomes so strong that it interferes with their ability to interact individually. Not only that, but the bond also interferes in them acting and behaving in a normal manner with others.  All this happens when the two siblings are not together. They do not have the thinking ability to act properly individually.

The only good thing about this is that it does not necessarily develop in all sibling puppies. This syndrome can affect unrelated dogs as well as dogs of any breed. With specialized training and pet parents, this syndrome can also be prevented from happening. 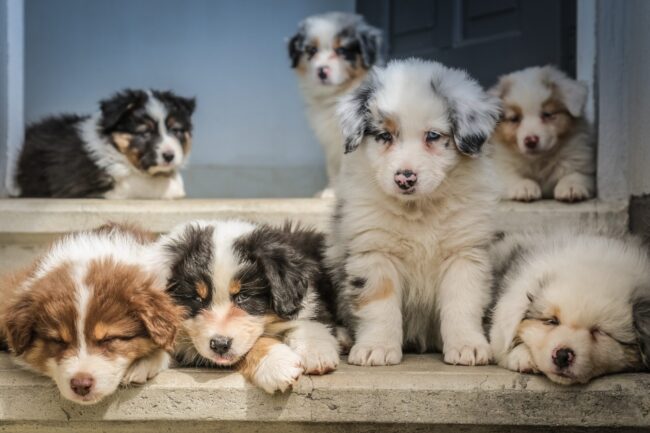 Lack of Socializing and Training

Preparing, mingling, housetraining, and focusing on two youthful pups can be more troublesome than you’d envision. Frequently certain parts of pup raising are lost or done improperly when there’s more than one puppy. As such a lot of time is devoted to “enduring the madness.” Without proper training, all dogs can create a frenzy anywhere they can! If the dogs are not social or have been kept inside almost all their life, they will have issues.

Being together will include love for each other. Hence dogs that have been born and grown up together will love each other unconditionally. However, this may lead to them being aggressive and hostile towards other dogs than each other.

Not only that, just as human siblings love each other the most, they do too. However, when human siblings fight, they fight twice as badly as they love each other. It is the same with sibling dogs. When they love, it is most of all. But when they fight, it is the worst of all. battling can get serious, even risky, as they arrive at development. Siblings frequently play hard, and battle more diligently.

Is Littermate Syndrome A Myth?

When we intently analyze what is “Littermate Syndrome”, we see that it is not a current disorder and there is no such substance. It’s anything but a helpful, proper, or precise mark to put on sets of puppies who are burdened with conduct issues. It isn’t perceived as a conclusion by specialists in the field of canine brain research and conduct.

Being littermates doesn’t naturally or straightforwardly incline dogs to have a social turn of events. There are auxiliary factors that can add to issues. There is a danger associated with getting two pups because of the realities that:

1) They may both offer a hereditary inclination to nervousness and social issues making them both bound to create issues independently.

2) If one of the puppies has a conduct issue, they may cause issues in the subsequent puppy. This can be due to putting social weight on them.

3) They might not have the chance to get associated with being separated from everyone else (isolated from one another). That may deliver them less strong and less ready to adapt when isolated.

Truly raising two pups of a similar litter together won’t prompt conduct pathologies or aggravations. Neither getting two random pups or canines from different litters fundamentally be a certain formula for a home. Many littermates can carry on with long and happy coexistences if that they are intellectually ordinary, solid, and hearty.

For this, you have to ensure to not let the puppies share a single crate. Be sure to give them time individually as well. They should be fed in different bowls and walked differently. They should be played with and trained separately.

Bond with the puppies individually as both would have unique traits and personalities. As they are different individuals, they would have different energy levels as well as habits. The most important thing is for your puppies to socialize. They should be taken to places with you and explore them. They should meet people as well as other dogs as much as they can.

There are professional dog trainers and dog training institutes as well. They can help prevent littermate syndrome from developing in your sibling dogs. Your sibling dogs would grow out to be just like any other normal puppy or a grown-up dog.

Littermate syndrome in puppies can lead to a disastrous final dish at home. The recipe would be the puppies. It is advisable to not get the same litter puppies or puppies of the same age home together. However, it is not yet confirmed that a host issue of the littermate syndrome does exist or not. For all the doctors know, it can still be a myth. All the issues just made up in a human’s mind and burdened on the shoulders of the pooches.