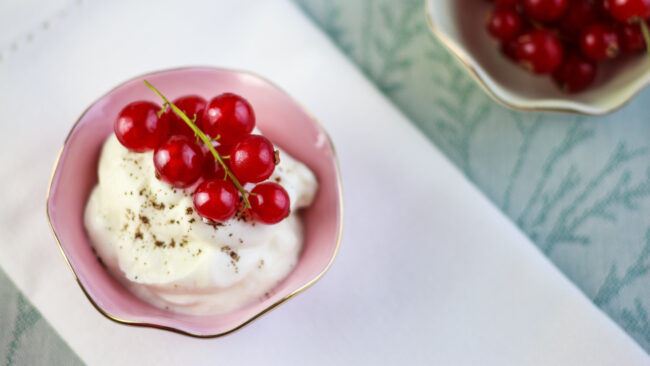 Can Dogs Eat Sour Cream – Is It Safe?

Sour cream is a dairy product and dairy products, in particular, arouse controversial attitudes among dog owners. One group believes that dairy products should never end up in the dog’s bowl, while others even swear by the many positive properties of sour cream, cottage cheese, and Co, and feed them regularly to the dogs.

Of course, there is also its philosophy behind it and you could also discuss it with meat-eaters and vegans and yet their diet can never be compared.

In this article, however, we would like to highlight the possible advantages and possible disadvantages of sour cream for the dog. In the end, it is crucial whether you give your four-legged friend sour cream whether he likes and tolerates it or not.

Yes and no, dogs are allowed to eat sour cream, provided they can tolerate it and, for example, are not lactose intolerant. The milk sugar is usually poorly tolerated because dogs only produce the digestive enzyme lactase in small quantities. But sour cream, cottage cheese, cream cheese, and Co are usually better tolerated by the four-legged friends than pure cow’s milk.

However, sour cream usually presents a different problem. Like sweet or sour cream, it contains a lot of fat. This can also quickly lead to diarrhea. In addition, sour cream is only suitable in small amounts for four-legged friends who are not overweight.

Make sure that you use sour cream with a slightly lower fat content. 80% sour cream is rather unsuitable.

If your dog can tolerate dairy products and should be nurtured a little, there is nothing wrong with sour cream. However, the total amount of sour cream should not exceed 3 percent of the amount of feed. A spoonful of sour cream under the food now and then is perfectly fine.

Ingredients in sour cream that are good for the dog

Sour cream is made from cream, which is mixed with lactic acid bacteria. These can have a positive effect on the intestinal flora. Sour cream is usually at least 20% fat, but can also contain up to 80% fat.

Benefits of sour cream for the dog

The milk sugar and high-fat content make sour cream suitable as a natural home remedy if your dog is constipated. However, if the problem does not resolve itself within a day, see the vet and stop experimenting with home remedies.

Whether constipation or diarrhea, these problems in four-legged friends are not to be trifled with.

Disadvantages of sour cream for the dog

The high-fat content is not good for animals. The high amount of fat can lead to diarrhea. The milk sugar can also cause problems.

However, some dogs tolerate sour cream well and especially very thin and underweight four-legged friends do not harm a spoonful of sour cream in the barf meal.

Is sour cream poisonous for dogs?

No, sour cream is not toxic to your dog. Because of the properties mentioned, sour cream is not one of the healthiest foods for four-legged friends. However, you don’t have to worry if your furry friend steals the empty cup of sour cream from the garbage can and licks it out.

Even if he gets a little more sour cream, usually nothing will happen. If your animal does not tolerate sour cream at all, it will vomit. If symptoms such as diarrhea or vomiting do not improve after a day, it is still better to see the vet.

Which dairy products are similar to sour cream?

As already mentioned, sour or sweet cream should be treated in the same way as sour cream. Butter, many types of cheese, and creme fraiche also have high-fat content. For this reason, it is usually not advisable to feed them, even though these dairy products usually contain less milk sugar.

If you want to feed your dog with dairy products, pay attention to the fat content, and choose products with lower fat content.

However, if you do not give any additional treats that day and also do without the oil in your barf meal, then sour cream will not have any negative effects on your four-legged friend – provided it can tolerate it. However, this differs from dog to dog and you won’t notice it until after you’ve fed sour cream.

Sour cream is not likely to be found in industrial dog food. The most common types of dog food are cheese, yogurt, or skyr. Buttermilk and low-fat quark are also dairy products that are increasingly found in dog food.

Can Dogs Eat Wheat Bread And Other Treats?