Groundhogs, also called woodchucks, are large rodents belonging to one of the 14 species of marmot or ground squirrel. They are also the largest member of the squirrel family. These burrow-dwellers have thick fur and weigh up to 13 pounds, and have a length of 27inches.

These woodchucks can only be found in North America, from Canada to the Southern parts of the United States.

Groundhogs are commonly found in the forest edges, pasture areas, grasslands, roads, and rivers. They sometimes are also found in dense forests. They can swim as well as climb trees.

These rodents usually dig a burrow in the woods for the winter, in the grassy areas for the warmer months and regularly keep their burrows clean by changing the insides of the nest.

Groundhogs are vegetarians. They usually eat fruits, plants, bark, and grass. They are also known to damage crops and gardens, and many consider them pests.

Yes, groundhogs hibernate, which means they sleep all winter. They are known as “true hibernators,” and they enter a state of sleep, where their body temperature and heart rate, from late autumn or early winter to early spring, come down dramatically.

Hibernation is not a deep sleep that lasts all winter. Instead, these rodents pass through the dormancy when their body temperature drops to about 25 degrees Fahrenheit (5 degrees C). They will do this for about a week, then wake up for three or four days, and then return to dormancy. They continue this cycle 12 to 20 times during winter. 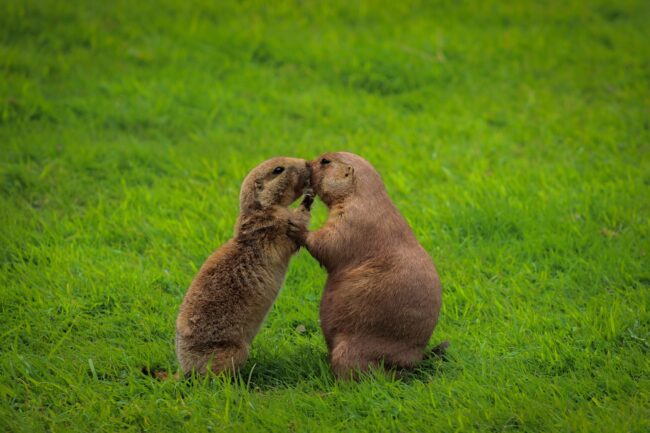 Why Do Groundhogs Hibernate?

Groundhogs are mostly herbivores, although they occasionally eat insects and other arthropods. Due to this plant-based diet, it is difficult for these woodchucks to get the food they need to survive the long winter.

So, they must consume as few calories as they can on a daily basis. A groundhog is a rodent, so it needs to chew to keep its teeth from growing longer.

Without enough nutrients to chew, groundhogs become malnourished. Lack of a consistent diet before hibernation can lead to a decrease in groundhog’s energy, leading to starvation and death during hibernation.

Groundhogs spend a good amount of time during the warmer months preparing for the winter sleep. Females give birth in early spring, usually early April or late March. This gives the kids time to mature in summer so they can dig their burrows in the winter.

To survive the winter, groundhogs start to gain weight and eat as much as they need in the summers. They continue this till fall. Groundhogs aim to save enough food, especially apples, walnuts, raisins, and other high-calorie protein foods that are high in fat.

Alfalfas is one of the key groundhog foods. In late summer, these leaves are quite abundant and provide nutritious and dense food for the groundhogs.

During the summer seasons, a groundhog on a seat can fill up more than a pound of vegetation, much like a 150-pound man who scarfs down a 15-pound piece.

To accommodate this physical appetite, these woodchucks grow their upper and lower incisors that can withstand wear and tear as they grow about one-sixth of an inch each week.

Along with plants, they also eat grubs, grasshoppers, insects, snails, other small animals, and even bird eggs.

These groundhogs like to wake up in early spring, so they can start eating the leaves once again for the winters, later it becomes more difficult for them to get leafy resources in the winter.

Groundhogs usually are active until winter frosts start in October or November. They then crawl into their nests and begin hibernating. They hide in till February or March until the weather warms up.

Whilst they can sleep for up to five months, some sleep only for two to three months, depending on the local temperature.

The males prepare for their mating in this way. After deciding where their partner is, the males go to sleep for another month and wake at the beginning of March for their mating. Mating begins in early spring.

At the end of winter, the males join the females, forming a bond and building their own new season space.

Groundhogs, or woodchucks, are the vegetarian rodents living in North America. These woodchucks hibernate from early winters or late fall till the early spring.

They are known as the true hibernators since their body temperature can go below 20 degree Celsius, breathing rate drops from 16 beats per minute to two, and heart rate ranges from 80 beats to five beats per minute.

Due to the lack of vegetation in winters, they eat as much as required in the warm seasons and store it for their hibernation period.

Groundhog hibernation introduced the famous American culture of Groundhog Day. This day is celebrated on February 2 every year. As per the tradition, if a groundhog sees its shadow on that day, there will be another six weeks in the winter.