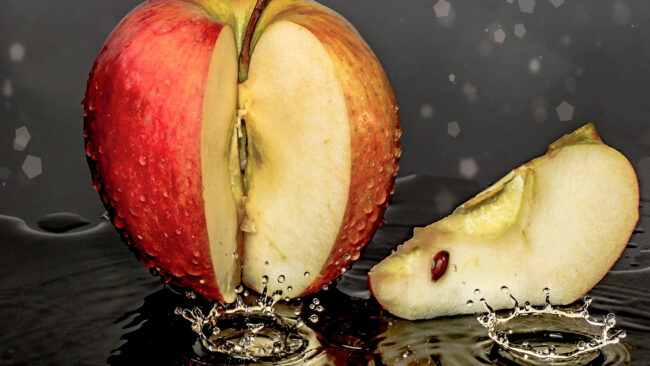 Dog Ate Apple Core – What To Do?

Dog Ate Apple Core? Dogs can tolerate apples well and are therefore allowed. They are very rich in fiber, which is why an excess has a laxative effect, but there is nothing fundamentally against feeding apples.

The cores contain small amounts of a hydrogen cyanide precursor. This is not dangerous with this amount, but if you want to be sure, remove the core before giving an apple to a very small dog.

Allergic reactions are neither common nor rare. So there is a certain risk. Dogs allergic to birch pollen in particular can also have a cross-allergic reaction to an apple.

The allergic reaction usually leads to discomfort in the throat. If your dog smacks or swallows more often after giving him a piece of apple, this would be an indication of an allergy.

In this case, you’d better avoid raw apples in the future.

The enzyme that triggers the allergy, however, is not heat-resistant. Hence, the problem will only appear with raw apple.

A little apple cooked, however, is harmless. So you don’t have to worry if your darling steals a piece of apple pie.

What Makes Apples So Healthy For Dogs?

Apples are sometimes thought to have real miraculous powers and you have probably heard the English saying that one apple a day saves you a doctor.

Apples do not contain any vitamins or other nutrients, particularly remarkable concentrations. The healthiest thing about apples is the pectin it contains.

Pectin is also used as a gelling agent because it can bind a great deal of liquid. It swells up and increases its volume considerably.

This happens during the digestive process in your dog’s intestines. On the one hand, this promotes digestion and, on the other hand, the pectin also has a bowel cleansing effect.

The downside is that a large amount of apple has a laxative effect. It is, therefore, better if you take care not to leave your four-legged friend unattended with apples.

This also applies to windfalls in the garden or on your playground.

An apple contains vitamins A, C, and E as well as some vitamins from the B group. The content of vitamin C is insignificant for healthy dogs as they produce it themselves.

Vitamin A is helpful for eyesight and the B vitamins are useful for various nerve cells and functions. Vitamin E protects all cells in the body from damage caused by the normal aging process.

The mineral content in an apple is more interesting: Potassium is an important electrolyte that is necessary to regulate the water balance. Your dog needs calcium to keep their bones and teeth strong and healthy.

Magnesium is good for the muscles and the nerves of the musculoskeletal system. That is why apple is the ideal snack for athletes – especially in combination with the fructose it contains.

The trace elements in apples are healthy, but less important for carnivores because they are mainly iron, zinc, and copper.

It is best to feed raw apples grated

You can give your dog an apple in raw form. Only unripe fruits are less suitable, they can cause diarrhea and gas.

Ripe apples are very sweet and therefore taste great to most dogs. The most digestible is a raw apple for the dog in a grated or pureed form.

When prepared, apples are not harmful to dogs. But they are not particularly healthy either, because ripe apples naturally contain a lot of fructose.

Preparations that are additionally sweetened are therefore unnecessarily high in calories. But if you have boiled the apples yourself without sugar, for example, there is nothing at all against giving your dog some of them.

If your dog loves apples, he will also like pears

If your dog likes to eat apples, he’ll probably also like pears. In principle, the same applies to feed pears as to apples: The kernels contain a small amount of a substance (amygdalin) which is converted in the body into poisonous hydrocyanic acid and can therefore be harmful.

If you remove the core housing, you are on the safe side.

The apple is now an integral part of the recipes of many dog ​​food manufacturers. You can find it at Animonda in the Gran Carno canned food with beef, venison, and apple.

But the producers have also discovered apples as a snack between meals. Here, treats such as the fruit teas from Bosch with apple are ideal.

Seedless apples are healthy for the dog – except for the sugar

In principle, there is nothing wrong with giving your dog apples if he likes them. However, you should exercise a sense of proportion with the portion size, because neither a lot of sugar nor the digestive effects are desirable or even useful in excess.

If you also take care not to give a small dog any apple pits, you can’t go wrong with apples when feeding your pet.

What is Littermate Syndrome? A Complete Guide – UPDATED 2021

Dog Muzzle Punch – How To Stop It & What You Should Know