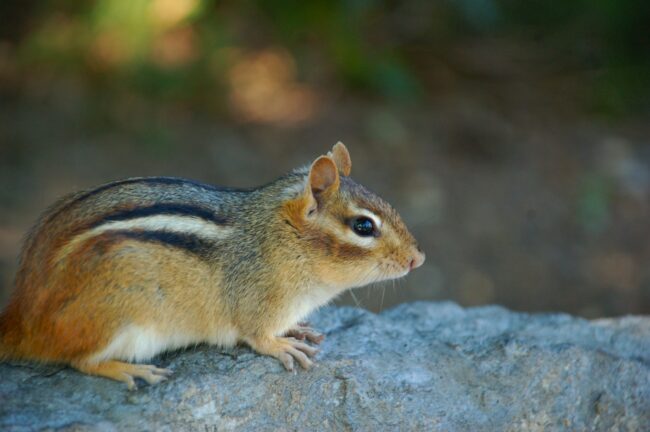 How Do Chipmunks Survive In The Winter? [UPDATED 2021]

Chilled winter months can be gruesome for animals surviving outdoors. Nevertheless, each of these animals has found ways to acclimatize themselves and survive. This is true, especially in the case of chipmunks.

Chipmunks are commonly described as tiny and striped burrowing squirrels of the family Sciuridae with large internal cheek pouches and have a total of 25 different species. While some consider chipmunks to be lively, they are also often overlooked by many, seen as pests and bothersome.

However, to our surprise, chipmunks are one of the most intelligent species known to successfully overcome any hurdles faced. The survival tips used by chipmunks, however, cannot be understood without gaining clarity in terms of their features, habitat, roles, and diet in the ecological system.

Chipmunks and Their Features: Divine Hoarders

Chipmunks are omnivores and thus, lie at the lower rung of the ecological system. They feed on grains, nuts, berries, mushrooms, salamanders, seeds, and insects. Some species of chipmunks make many caches of food.

This is commonly known as ‘scatter or larder hoarding.’ A large amount of the food gathered is stored in burrows at the beginning of autumn, for winters. Although chipmunks aren’t highly adored species, they play a potential role in maintaining the ecological balance.

They not only assist in spreading seeds across a region but are also essential for creating new habitats for several organisms. In addition to this, their physical features are almost impossible to ignore.

The reddish-brown to grey colored coats in chipmunks, contrasting with dark or light stripes, white fur on their underpants, and large radiant eyes with characteristic bushy tails, makes them a favorite character amongst animators.

Chipmunks and Their Habitats: Complex But Tidy!

Chipmunks are generally seen scuttling through the undergrowth of a variety of environments from scrublands, shrubby deserts to alpine forests.  They construct complex burrows with multiple entrances, tunnels, and chambers for sleeping, which are kept very clean.

Sleeping areas are often enlarged and packed with tattered leaves for comfort, while the shells and feces are accumulated in refuse tunnels. Food is commonly kept in the lowest tunnels to keep it fresh and cool. Some species of chipmunks may even make their homes in bushes, logs, and deserted nests.

Chipmunk Behavior: Speedy and On The Go!

Chipmunks are extremely active and fast. They possess a bird-like chip used in times of danger or as a mating call for female chipmunks. Although chipmunks hibernate from late autumn to early spring, they do not store fat; instead nibble away at their supplies gradually in winter, waking every few days to eat. The same has been described below in greater detail.

How Do Chipmunks Survive In The Winter?

Chipmunks have a tendency to disappear as the temperatures start dropping. Then, you will find them resurfacing during spring. In such circumstances, it is commonly assumed that the animals are hibernating. But is it true for chipmunks too? Let’s find out.

Chipmunks aren’t exactly hibernators in the true sense. However, chipmunks do enter the states of languor. Even though they are known for retreating to their own burrows and entering a state of hibernation, they wake up after every few numbers of days to eat and defecate.

Thus, rather than hibernating, chipmunks can be referred to as ‘light sleepers.’ As a result of this, their heart and respiration rate reduce from sixty to twenty breaths every minute, while their body temperature also falls from 100 to 40 degrees Fahrenheit.

In addition to this, the various survival tips used by chipmunks include the following:

Most hibernating animals feed on as much food as possible during autumn and spring to use the stored fat and energy throughout winter. Those who are unable to do so may starve to death while hibernating and then never wake up.

The chipmunk behavior is quite varied in this respect. Rather than consuming food in the summer season, chipmunks choose to be hoarders. They collect and store as much food as possible to consume it during the winter months. This food is stored in burrows that can extend up to 30 feet in length.

At times, if any other chipmunk tries to steal the stored food, the chipmunk won’t really face any shortages because of their emergency food stored in an exclusive burrow, that is quite away from their ordinary food stores. This helps them make sure that they can survive the winter season.

Many a time, chipmunks may even forget where they’ve stored their piles of seeds as well as nuts. However, this never goes to waste. With time, the perished food nourishes the soil. Also, it is believed that many of the beech, oak, and maple trees are actually planted just as a consequence of these elapsed food storages.

Chipmunks are amazing hoarders. It is mainly because of their perfectly adapted internal cheek pouches. Moreover, these cheek pouches can also be utilized to transport a lot of food to the burrows.

Chipmunks are also known to capture food in their own cheek pouches before they go off to sleep, that is, hibernate, during the winter months. They tend to eat their food from their cheek pouches. Also, when this food of their ends, they rely on multiple emergency caches they’ve stored for themselves.

Chipmunks are thus classified as intelligent species that store food over months leading up to winter. Despite the various changes experienced by them in the winter season, they manage to successfully overcome it by entering into a hibernation state of sorts and making use of the aforementioned tactics in order to survive through the chilled season.

As a result, the chipmunks tend to disappear during winter but resurface in the spring. On exiting the state of hibernation, chipmunks urinate, eat and defecate.