Wonder how difficult it is to be a wild rabbit, constantly on the run for its everlasting charm. No doubt, bunny in the natural habitat is much stronger than the common notion surrounding bunnies. However, it becomes equally difficult to ascertain their behavior as compared to cats and dogs.

Wild Rabbit Sitting In One Place?

Often on the loose, wild rabbits act weirdly. One of the most prominent being the act of sitting in one place for a long time. Such behavior also involves staring blankly at a distance. There are various explanations for such behavior, some of which include have been mentioned below.

Wild rabbits as a specie

Unlike domesticated rabbits, wild rabbits are brave and employ unique behavioral patterns of reproduction and territorial defense. Rabbits live in an underground network called warrens and have whiskers with the same width as the body. 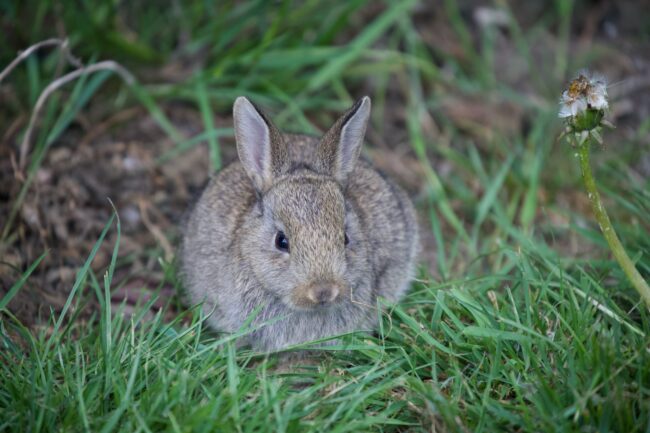 Having whiskers like such allows them to pass through a tunnel easily. With strong hind legs and long ears, they prefer living in grasslands or open areas.

Wild rabbits do not prefer socializing too much. Rabbits prefer having a bit of space and avoid getting too close to humans. Wild rabbits are constantly on the run looking for a good burrow or hiding from a larger animal.

Rabbits constituting the initial stages of the food chain, become the most favored item in the food web. Hence, the bunny has to employ a set of weird habits to escape the enemy and look out for their young ones.

What are the reasons behind it?

Certain species of wild rabbits also prefer to live in human settlements because of an extensive range of food options. While there is no hard and fast pattern, every species requires a different understanding.

Now rabbits can’t afford a security service, and there isn’t doubt about the fact that quite the entire world of predators seems to be after them. What is the smartest way for a bunny to ensure safety?

Full scanning of the surroundings to identify any potential hidden predator waiting to pursue a cold blood murder. However, rabbits are smart and ensure that free accommodation is available nearby for the just in case scenarios.

Sitting for long provides them with an upper hand over their predators, who could be much stronger yet not sufficiently smarter. Being the one in charge of their loved ones, a rabbit cannot simply give up in the face of adversity.

A lot of times, there is no tell-tale behind a rabbit’s choice to observe his surroundings. Observing the environment and the objects is crucial in matters of escaping or food options.

Being aware of the resources around them can help them escape the enemy easily in dangerous situations. Sometimes, being aware of the surrounding also ensures a steady recovery from a chase.

We all became aware of the concept of potential and kinetic energy. However, rabbits have been smart enough to use the concept of survival. Whenever a predator is nearby, rabbits try to surge up all their potential energy to lead to a stronger reflex action.

A rabbit is constantly on the move, and the speed factor often disrupts the food options available around. However, rabbits tend to sit in one place for hours to improve focus.

An enhanced focus allows them to look for potential food options in the surrounding. Food options can sometimes be way too spread, requiring rabbits to filter from the available options.

What could be a more logical reason for an idle sit other than fatigue? Rabbits are fast and constantly on the move that requires a lot of rest to regain energy. Hence, investing prolonged hours sitting idly is considered a good way to regain lost energy.

Burrows might be the ideal resting place, but nothing like a good open house rest. Further, being around food comes in handy when a bunny is searching for a wholesome rest period.

Rabbits are extremely sensitive to sound, touch, or any other factor. When a predator makes a sound, they make sure to listen to the origin. Sometimes, it might yield positive results and help the bunny to run faster to escape the enemy. However, even a failed attempt provides the species a sense experiment which can be later on improved.

A rabbit can hear sounds between the range of 360 hertz to 42000 hertz. Secondly, being in the surrounding allows better evaporation of heat from their body. Rabbit ears have specialized blood vessels that evaporate body heat keeping the body cool.

Mother rabbits are very protective of their offspring. A constant watch is required to detect any possible attack from a predator. Mother rabbit ensures the offspring’s safety by sitting around the burrow for hours on end.

They might sit extremely near to the nest or at a small distance around their offspring.

There is no better day to be full and gay. Rabbits being primary foragers, love to find the right burrow and eat until a full stomach has been achieved. Simply consuming along with their little ones also makes for a good family get together.

Stretched legs along with a blank stare point to a rabbit’s way of a self-care day. Proper grooming is quite similar to a cat wherein rabbits try to groom their body hair by using the tongue.

Wild rabbits are fun to watch, but the inherent struggle involved can be tiring. Aiming for the right food or escaping a predator involves a quick strategy. Rabbits make use of various behavioral patterns, some of which are still being decoded! So, these are the main reasons behind a wild rabbit sitting in one place.