For those who don’t know, neutering refers to the process of surgically removing the dog’s testicles. This procedure sterilizes the male dog so that it can no longer fertilize female dogs. Though some people don’t agree, neutering is a safe process as it does not stop the production of hormones but ensures that your dog does not reproduce.

If you are a dog owner thinking about getting your furry friend neutered or you have done it recently, it is natural to wonder what you should expect. You are likely to have so many questions as you see a lot of changes in the dog’s behavior after the procedure. In this guide, let us try to answer some of the most common concerns about the sexual behavior of dogs after neutering.

Owners may not generally notice major changes in their dog’s behavior after the procedure but there is a possibility to see some changes in their sexual behavior. It is natural for a neutered dog to become less interested in intercourse though some of them may try. One of the most asked questions is whether neutered dogs’ ejaculate.

Mating with one another is quite a normal part of dogs’ lives. The fact is that a dog can ejaculate even after getting neutered. A neutered dog’s sexual functions don’t change from before, it is just that the purpose changes. After getting neutered, the dog can mount on another dog but cannot impregnate them.

Can Neutered Dogs Get Erect?

This is a common question asked by dog owners as there are so many assumptions and myths about what neutering actually does and what it doesn’t. A lot of people get their dogs neutered to calm their behavior and stop them from impregnating other dogs. While most dogs experience a reduced interest in sex after the procedure, it is completely natural for them to get erections.

When a dog is neutered, his testosterone production is inhibited and they no longer produce semen to make female dogs pregnant. But the procedure does not stop the dog from getting excited and having an erection. Neutered dogs certainly have fewer erections, stop marking territory and humping everything they see. However, the dog can get excited for some reason and the body responds by sending blood to the penis to give him an erection.

Neutering removes the testicles but does not stop the blood flow to the penis which is why neutered dogs can still get erect. After they are neutered, a lot of dogs continue to mount and even ejaculate as they associate the experience with a good feeling. 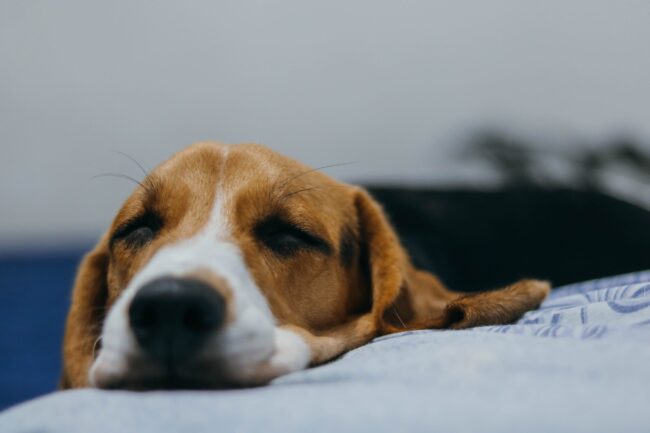 Dog Neutered But Still Gets Excited? Here’s What It Means

Dogs are neutered to control the population and save them from medical problems like testicular cancer and prostate disease. Neutering a dog lowers the sexual desire to some extent though it is completely natural for them to get excited and erect. There are several reasons your dog can get excited even after getting neutered. Here are some of the primary factors triggering excitement in neutered dogs.

The most obvious cause of a dog’s erection is sexual excitement. Though a dog shows much-reduced interest in sex after the procedure, it does not stop him from getting excited at times with humping and mounting. This is normal dog behavior and even common for neutered dogs.

A common reason for a dog to show excitement is the fact that he is responding to feelings like happiness. Every dog responds differently to emotions and your dog is likely to get aroused when happy or excited.

In rare cases, some dogs can have erections from sudden stress or anxiety even if they are neutered. Such excitements come quickly and may take a while to go away. See if your dog has recently experienced any trauma or any major changes in the house like an arrival of a new member. Such changes can make the dog feel uneasy resulting in unexpected excitement and erections. As time passes, such anxiety should ease off.

This is a medical condition in which the erection doesn’t go away and is a concern for the dog and the owner. A neutered dog can also be affected by this problem. The penis does not get retracted and causes a lot of pain, discomfort, and complications if medical assistance is not immediately available. If your dog seems to be in pain and the erection has been present for a long time, it is important to seek medical attention at the earliest.

Sometimes dogs mount on other dogs to display their social control or status. Such behavior can cause excitement and may or may not cause erection and ejaculation. Some dogs also mount and get excited as a part of their play behavior.

So, it is completely natural for a dog to ejaculate and get erected after undergoing neutering. However, if you are concerned about the sexual behavior of your dog, you can try and figure out the cause to understand how to deal with it. The best response to your dog’s excitement is to ignore it. You can also try and keep the dog active and calm to avoid any unwanted excitement.