Sometimes, your cat can get constipated because of poor diet, insufficient water intake or some medical issue. Constipation can be dangerous for pets as their intestines get clogged up with hard feces and lead to some serious health problems if not addressed on time. There are several ways to treat constipation in cats, one of the most recommended solutions being an enema.

An enema administration involves injecting fluid into the bowel to stimulate stool passing. Most cat owners are concerned about the side effects associated with an enema and wonder whether it is safe to use this method for constipation in their pet. In this post, we discuss what you should expect after giving an enema to your cat. We also talk about the common concerns related to cat enema and how they can be addressed.

Cat Enema Side Effects – What To Expect After Cat Enema?

It is completely safe to give an enema to your cat to relieve it from constipation. However, cats are not likely to behave normally after inserting a tube into their colon and pumping the fluid. Each pet would express the changes and shock differently. While some cats may show common effects, others can exhibit something rare though not serious. Some others can experience serious side effects.

You should keep the cat indoors after giving it an enema and make sure it has quick access to the litter box and a lot of water. You can even consider putting it in the bathtub to avoid the risk of spoiling the house with poop here and there. Here are some of the most common side effects you can expect after a cat enema.

An enema procedure is aimed at getting the cat poop out all the feces and clogged poop in the digestive tract and colon. So, cat owners expect runny stool movement after the procedure. Within a few minutes of enema, the cat should have its bowel movement and expel the poop. However, you should keep a close eye on the situation and make sure your cat’s bowel movement becomes natural in a few days.

Though unwanted, diarrhea can sometimes happen after an enema. It can turn into concern if it lasts for long. Diarrhea is a highly possible side effect of cat enema and should get better on its own once the pet has passed all the feces.

An enema could affect the cat’s whole digestion. Vomiting is a common sign in cats after an enema and should not be worried about. However, if the condition lasts long and does not get better with time, your cat may need a vet consultation.

Cat Enema Not Working? Here’s What To Do

While an enema should normally help the cat pass the impacted stools by softening them, it may not seem to work in some rare cases. If the constipation is severe and caused by some serious underlying conditions, an enema may not help. In this case, the cat may need manual removal of hardened feces under a vet’s supervision. The veterinarian can perform this procedure under local anesthesia.

Sometimes, constipation can become a long-term problem in cats and may need medications and dietary changes to prevent a recurrence. When medical treatments and enemas fail to work, the cat may need a surgical treatment that involves removal of the affected part of the colon. Most cats do well after the surgery with a few side effects.

Diarrhea is a very common effect seen in cats after an enema. The fluid injected into the rectum to soften the stools can cause diarrhea and runny bowel movement. Though this is undesirable, it helps the cat pass all the blocked poop in the rectum and intestine to relieve it of constipation and discomfort. If it lasts for a short time when the cat passes the clogged feces, it is completely normal.

However, sometimes, your cat can show signs of diarrhea for a long time after an enema. Such a condition can cause water loss in the body and make the cat dehydrated. If diarrhea becomes persistent, your cat can suffer from problems like kidney and liver damage. It is important to visit the vet if you feel the situation is out of your control. You should also take care of the cat’s diet after enema as the diet can affect its digestion and diarrhea to a great extent.

The goal of an enema is to help the cat poop out all the impacted feces and blocked stool in the digestive tract and rectum. Within 10-15 minutes after the fluid injection, your cat should start expelling the poop and have bowel movements. An enema procedure can affect different cats in different ways and some of them can show rare signs and reactions as well.

Some cat owners report their cat feeling lethargic after enema. This is quite common and should get better on its own. The procedure itself and the resulting changes in the body can cause lethargy and discomfort in the cat. Frequent pooping may result in water loss, making the cat dehydrated and lethargic. It is important that your pet drinks a lot of water and fluids and eats light, wet food to stay hydrated and energetic after an enema.

Under proper care, the cat should feel better within a day. However, if your pet remains lethargic or shows some other symptoms of pain or discomfort, it should be reported to your vet. 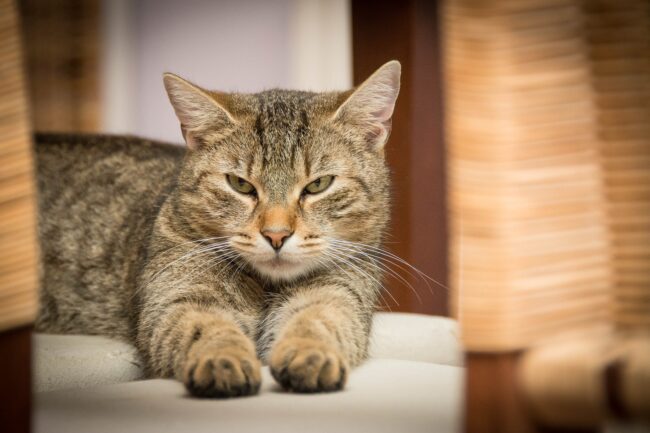 Veterinary Enema Procedure – What You Should Know?

Your cat could be given an enema at home if you are experienced with it. However, this should be done under veterinary advice when the constipation is really simple. If you are not experienced with the procedure or the cat has severe constipation, you should leave the procedure to the vet. The doctor can ensure the safety of your felines while performing what is best for them.

The vet would diagnose constipation and try fluid therapy, medications and diet changes to relieve the symptoms before using an enema. The cat may need repeated enema procedures to produce the desired results. The solution used for an enema is often determined based on the severity of constipation and other factors. Your vet can explain to you what you should expect during and after a cat enema.